NATURE SCIENTIFIC REPORT 20/03/17 A smartphone-based diagnostic platform for rapid detection of Zika, chikungunya, and dengue viruses. Assay speed and sensitivity We aimed to develop a rapid and reliable QUASR RT-LAMP assay for ZIKV, while relying on previously reported RT-LAMP assays for CHIKV and DENV17,19,22. 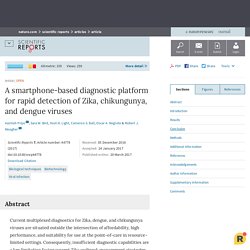 We first set about identifying an optimal primer set for ZIKV, using the LAMP-compatible SYTO intercalating dyes to perform real-time monitoring. We then adapted the optimal primer set to the target-specific QUASR endpoint detection technique. The mechanism and chemistry of QUASR-based RT-LAMP detection techniques has previously been described in detail22. At least one recent publication describes a different RT-LAMP assay for ZIKV utilizing leuco crystal violet indicator13. We prepared a ZIKV RNA standard from cultured ZIKV. 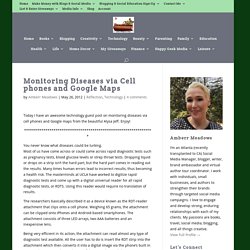 Enjoy! You never know what diseases could be lurking. Most of us have come across or could come across rapid diagnostic tests such as pregnancy tests, blood glucose levels or strep throat tests. Dropping liquid or drops on a strip isn’t the hard part, but the hard part comes in reading out the results. Many times human errors lead to incorrect results, thus becoming a health risk. The researchers basically described it as a device known as the RDT-reader attachment that clips onto a cell phone. Being very efficient in its action, the attachment can read almost any type of diagnostic test available. The attachment’s work doesn’t end there; it goes on to transmit the results wirelessly to a server for processing, storage, and mapping via Google Maps to track the spread of certain conditions and diseases around the world over time.

SCIENTIFIC REPORTS 09/03/15 Using Mobile Phone Data to Predict the Spatial Spread of Cholera. GENOME MEDICINE 29/09/16 Mobile real-time surveillance of Zika virus in Brazil. Why are so few ZIKV genomes available more than a year after the virus was discovered in the Americas? 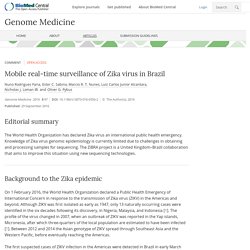 Data from the Zika Open Research Portal ( suggest that, in an animal model of infection, ZIKV viral load reaches a maximum only 1–2 days after virus infection. Furthermore, in humans, it seems that viral load peaks within a week of onset of clinical symptoms [1]. The early peak in viremia, combined with mild symptoms for many ZIKV infections, means that there is often little virus left for sequencing when clinical samples (usually serum) are taken from patients with suspected ZIKV infection. Consequently, it has proven comparatively difficult to obtain full ZIKV genomes directly from clinical material without enrichment (for example, Most commonly this is undertaken by growth in cell culture, but this method is laborious and has the potential to introduce culture-specific genetic changes.

FRONTIERS IN PLANT SCIENCE 06/09/16 Using Deep Learning for Image-Based Plant Disease Detection 1EPFL, Switzerland 2Penn State University, USA. 1EPFL, Switzerland 2Penn State University, USA Crop diseases are a major threat to food security, but their rapid identification remains difficult in many parts of the world due to the lack of the necessary infrastructure. 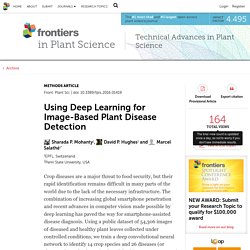 The combination of increasing global smartphone penetration and recent advances in computer vision made possible by deep learning has paved the way for smartphone-assisted disease diagnosis. Using a public dataset of 54,306 images of diseased and healthy plant leaves collected under controlled conditions, we train a deep convolutional neural network to identify 14 crop species and 26 diseases (or absence thereof). The trained model achieves an accuracy of 99.35% on a held-out test set, demonstrating the feasibility of this approach. Overall, the approach of training deep learning models on increasingly large and publicly available image datasets presents a clear path towards smartphone-assisted crop disease diagnosis on a massive global scale. JOURNAL OF FISH DISEASE 15/08/16 A novel use of social media to evaluate the occurrence of skin lesions affecting wild dusky grouper, Epinephelus marginatus (Lowe, 1834), in Libyan coastal waters (concerne Facebook)

The social media network Facebook™ was used to gather information on the occurrence and geographical distribution of dusky grouper dermatitis, a skin lesion affecting the dusky grouper, Epinephelus marginatus. 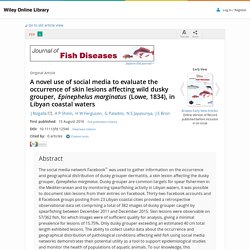 Dusky grouper are common targets for spear fishermen in the Mediterranean and by monitoring spearfishing activity in Libyan waters, it was possible to document skin lesions from their entries on Facebook. Thirty-two Facebook accounts and 8 Facebook groups posting from 23 Libyan coastal cities provided a retrospective observational data set comprising a total of 382 images of dusky grouper caught by spearfishing between December 2011 and December 2015. Skin lesions were observable on 57/362 fish, for which images were of sufficient quality for analysis, giving a minimal prevalence for lesions of 15.75%. Only dusky grouper exceeding an estimated 40 cm total length exhibited lesions. PNAS - 2016 - Digital epidemiology reveals global childhood disease seasonality and the effects of immunization. Authors Edited by David L. 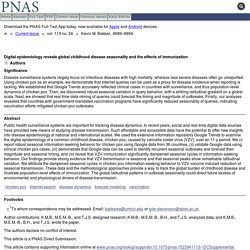 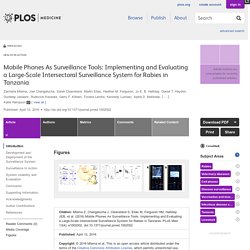 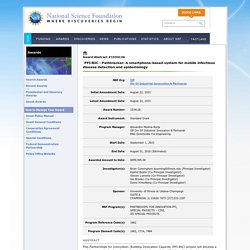 By means of a smartphone-based detection instrument, the results are shared with a cloud-based data management service that will enable physicians to rapidly visualize the geographical and temporal spread of infectious disease. When deployed by a community of medical users (such as veterinarians or point-of-care clinicians), the PathTracker system will enable rapid determination and reporting of instances of infectious disease that can inform treatment and quarantine responses that are currently not possible with tests performed at central laboratory facilities. 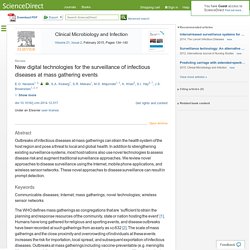 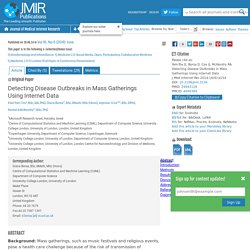 The IRC will pioneer low cost, easy to use mobile phone-connected diagnostic tests based on advances in nanotechnology for use in GP surgeries, pharmacies, elderly care homes, developing countries and at home. The mobile tests aim to identify diseases with high sensitivity and specificity and give results within minutes from just a pin-prick of blood or a simple swab. The UCL team are already developing a smart-phone-connected prototype test for HIV with industry partners OJ-Bio.

The Kenya Ministry of Health, along with researchers in Kenya for the Centers for Disease Control and Prevention, found that smartphone use was cheaper than traditional paper survey methods to gather disease information, after the initial set-up cost. Survey data collected with smartphones also in this study had fewer errors and were more quickly available for analyses than data collected on paper, according to a study presented today at the International Conference on Emerging Infectious Diseases in Atlanta.

NDTV 16/06/14 Brazilians Hope to Help Fight Dengue With New Smartphone App. While World Cup referees finally have goal-line technology to prevent mistakes, doctors in Brazil will soon have their own computer gizmo to contain dengue outbreaks. In the tropical northeastern city of Natal, a new smartphone application could allow residents to alert authorities about the location of concentrations of mosquitos and cases of dengue with the touch of a finger.

The app was developed by university researcher Ricardo Valentim in collaboration with epidemiologist Ion de Andrade, who works for the Natal city council. "If someone identifies dengue, they pinpoint it on the (application's) map and that allows us to see where it is developing and to react immediately to stop it spreading," Andrade said. The "Dengue Observatory" app is in beta mode for now but is expected to come online this month. Once up and running, it will allow authorities to know exactly where to act. "If it's mosquitos, we can locate and treat the water source. There is no cure for the mosquito-borne disease. BMC Med Inform Decis Mak. 2014 Dec 24;14(1):5. A comparison of smartphones to paper-based questionnaires for routine influenza sentinel surveillance, Kenya, 2011¿2012. EMERGING THEMES IN EPIMIOLOGY - 2014 - Public health for the people: participatory infectious disease surveillance in the digital age.

Clinical Microbiology and Infection Volume 19, Issue 11, November 2013, An overview of Internet biosurveillance. The general process of Internet-based biosurveillance. Human input from information technology, public health and other experts can occur at any step. Media reports on dengue fever on Madeira (number of articles per day, from 5 September to 21 November, 2012). The grey bar denotes the initial European Centre for Disease Prevention and Control (ECDC) response to the first alert, issued on 3 October 2012 (described in the text). Abstract Internet biosurveillance utilizes unstructured data from diverse web-based sources to provide early warning and situational awareness of public health threats.