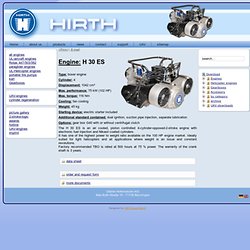 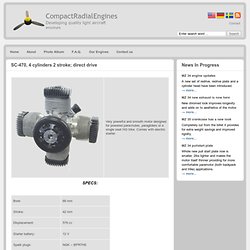 MZ 34 new exhaust is now here New chromed look improves longevity and adds on to aesthetics of the motor. → more... MZ 35 crankcase has a new look Completely cut from the billet it provides for extra weight savings and improved rigidity. → more... Compact Radial Engines. MZ 34 engine updates A new set of redrive, redrive plate and a cylinder head have been introduced. → more... 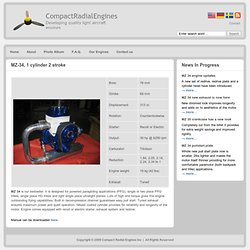 MZ 34 new exhaust is now here New chromed look improves longevity and adds on to aesthetics of the motor. → more... MZ 35 crankcase has a new look Completely cut from the billet it provides for extra weight savings and improved rigidity. → more... MZ 34 pullstart plate Whole new pull start plate now is smaller, 2lbs lighter and makes the motor itself thinner providing for more comfortable paramotor (both backpack and trike) applications. → more... Helicopter Aerodynamics, calculating thrust loading, disk loading, power loading. Return to the flight school home page Below, we will demonstrate a method to calculate the theoretical thrust that that a propeller or rotor can generate. 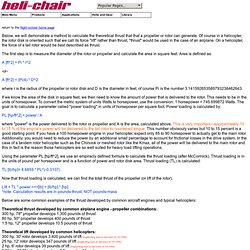 Of course in a helicopter, the rotor disk is oriented such that we call its force "lift" rather than thrust, "thrust" would be used in the case of an airplane. On a helicopter, the force of a tail rotor would be best described as thrust. The first step is to measure the diameter of the rotor or propeller and calculate the area in square feet. Area is defined as: A [ft^2] = Pi * r^2. Electric Aircraft. Quadrotor. Unlike most helicopters, quadcopters use 2 sets of identical fixed pitched propellers; 2 clockwise (CW) and 2 counter-clockwise (CCW). 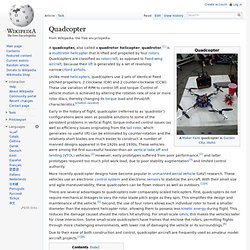 These use variation of RPM to control lift and torque. Control of vehicle motion is achieved by altering the rotation rate of one or more rotor discs, thereby changing its torque load and thrust/lift characteristics. [citation needed] Early in the history of flight, quadcopter (referred to as 'quadrotor') configurations were seen as possible solutions to some of the persistent problems in vertical flight; torque-induced control issues (as well as efficiency issues originating from the tail rotor, which generates no useful lift) can be eliminated by counter-rotation and the relatively short blades are much easier to construct.

A number of manned designs appeared in the 1920s and 1930s. More recently quadcopter designs have become popular in unmanned aerial vehicle (UAV) research. History[edit] Early attempts[edit] Manned flight with electric multicopter. A Swarm of Nano Quadrotors. Quadrocopter Pole Acrobatics. HK Beerlift Entry 47.04kg. Modelling and control of a quad-rotor robot. Multirotor Discussion Forum. Quote: With my limited (basically nonexistant) experience with RC aircraft, I almost feel ashamed putting myself in this conversation (but when i put myself into something- I don't tend to do it half- ) I've come to realize that ALL of this is more complicated than I think- that's what has me so hooked- Plus I love the community of know-how and collective growth you guys have going on this forum- and that I get to learn this stuff from folk like you (all) I had not figured on setting a governor as too much of an issue, or that the generator would need attendance: why not Start the motor- Set the RPM- Check the output (as dictated by the "black-box" overvoltage regulaotr/converter/BEC/capacitor- and let her Fly? 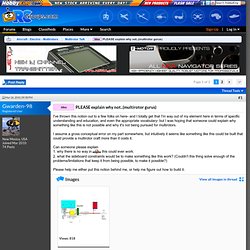 I think you're right in that the "Black- box" I keep refering to is going to be the most complex engineering task. That's just the type of quantified stuff I was hoping for from the experts. How much should our contraption weigh? Download. Gas powered TriCopter?