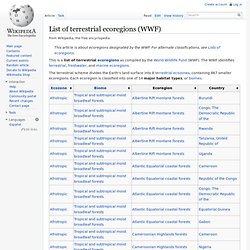 Mapping with Google - Course. Projection Transitions. Create Maps. Physiographic Regions. Subregion. A subregion is a part of a larger region or continent and is usually based on location. 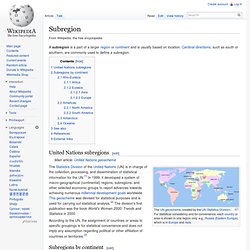 Cardinal directions, such as south or southern, are commonly used to define a subregion. United Nations subregions[edit] The Statistics Division of the United Nations (UN) is in charge of the collection, processing, and dissemination of statistical information for the UN.[1] In 1999, it developed a system of macro-geographical (continental) regions, subregions, and other selected economic groups to report advances towards achieving numerous millennial development goals worldwide. This geoscheme was devised for statistical purposes and is used for carrying out statistical analysis.[2] The division's first publication was the book World's Women 2000: Trends and Statistics in 2000. According to the UN, the assignment of countries or areas to specific groupings is for statistical convenience and does not imply any assumption regarding political or other affiliation of countries or territories.[3] Asia[edit] 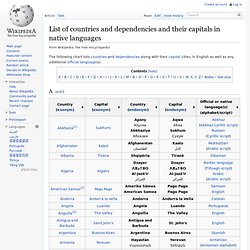 Big ideas from small places. Editor's Note: Parag Khanna is a senior research fellow at the New America Foundation, visiting senior fellow at the European Council on Foreign Relations, and author of The Second World and How to Run the World. 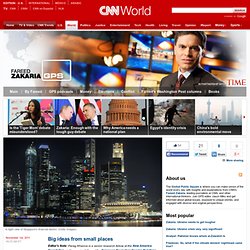 David Skilling is founding director at Landfall Strategy Group, a Singapore-based advisory firm. By Parag Khanna and David Skilling – Special to CNN In the current phase of globalization, financial, ecological, political and social crises are occurring simultaneously and magnifying each other in unpredictable ways. From the Fukushima nuclear meltdown reshaping German politics and the European power industry, to America’s sub-prime mortgage meltdown threatening the Eurozone, such chain reactions are undermining an already fragile stability. Large countries and blocs such as the U.S., China and the EU, and new groupings like the G-20 and the BRICS, are grappling with this unprecedented combination of structural challenges and black swans. The same is true for global diplomacy. Ethnic groups-CIA - The World Factbook.

The Physiographic Regions of the world are a means of defining the Earth's landforms into distinct regions, based upon the classic three-tiered approach by Nevin Fenneman in 1916, that further defines landforms into: 1. physiographic divisions; 2. physiographic provinces; and 3. physiographic sections.[1] This foundational model, which Fenneman used to classify the United States, was the basis for similar classifications of other continents later, and is still considered basically valid.[2] Introduction[edit] During the early 1900s, the study of regional-scale geomorphology was termed "physiography". 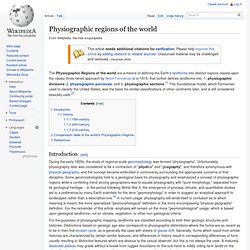 Unfortunately, physiography later was considered to be a contraction of "physical" and "geography", and therefore synonymous with physical geography, and the concept became embroiled in controversy surrounding the appropriate concerns of that discipline. 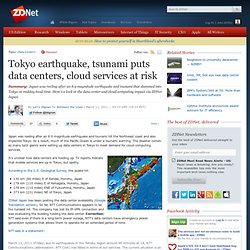 As a result, much of the Pacific Ocean is under a tsunami warning. The disaster comes as many tech giants were setting up data centers in Tokyo to meet demand for cloud computing services. It's unclear how data centers are holding up. TV reports indicate that mobile services are up in Tokyo, but spotty. According to the U.S. 130 km (80 miles) E of Sendai, Honshu, Japan178 km (110 miles) E of Yamagata, Honshu, Japan178 km (110 miles) ENE of Fukushima, Honshu, Japan373 km (231 miles) NE of Tokyo, Japan ZDNet Japan has been posting the data center availability (Google Translation version). NTT said in a statement: March 11, 2011 (Friday) due to earthquakes in the Tohoku region around 46 minutes at 14, NTT Communications (abbreviation: NTT Com) has failed in some of our services. Amazon Web Services indicated that services are continuing. Other updates include (translation):