When it's time to sell your company

Securing A Huge Growth Round. Editor’s Note: David Frankel is a Managing Partner at Founder Collective, an early-stage VC firm based in Cambridge and NYC that has made investments in over 150 companies including Uber, BuzzFeed, Coupang, Makerbot, PillPack and SeatGeek. 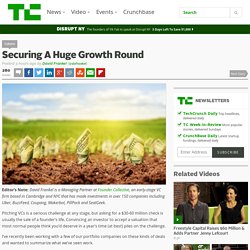 Pitching VCs is a serious challenge at any stage, but asking for a $30-60 million check is usually the sale of a founder’s life. Convincing an investor to accept a valuation that most normal people think you’d deserve in a year’s time (at best) piles on the challenge. I’ve recently been working with a few of our portfolio companies on these kinds of deals and wanted to summarize what we’ve seen work. A word of warning: Most startups don’t qualify. Ten-figure checks go to those with significant tangible growth in revenue or DAUs, real margins, or a crystal-clear path to strong monetization. If your company meets that profile, here’s how I think you may be able to make it happen.

Before the pitch Consider your appetite for risk. Corporate Development 101: What Every Startup Should Know. The following is a guest post by Chris Sheehan. 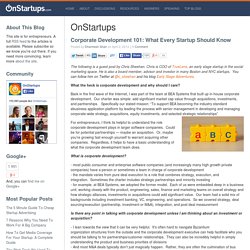 . - I lean towards the view that it can be very helpful. Can your VCs help? Should You Sell Your Company? Sittin’ up drunk shuffling thoughtsGot paper but I’m lostLosing focus what a n#%$a still hustin’ for? 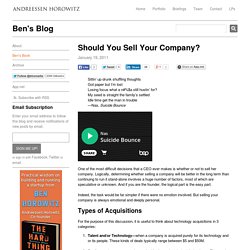 My seed is straight the family’s settledIdle time get the man in trouble—Nas, Suicide Bounce One of the most difficult decisions that a CEO ever makes is whether or not to sell her company. Logically, determining whether selling a company will be better in the long term than continuing to run it stand-alone involves a huge number of factors, most of which are speculative or unknown. And if you are the founder, the logical part is the easy part. Indeed, the task would be far simpler if there were no emotion involved. Types of Acquisitions For the purpose of this discussion, it is useful to think about technology acquisitions in 3 categories: Talent and/or Technology—when a company is acquired purely for its technology and or its people. The Logical. The Founder’s Guide To Selling Your Company. For most founders, selling a company is a life changing event that they have had no training for. 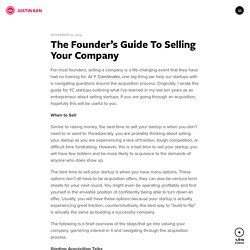 At Y Combinator, one big thing we help our startups with is navigating questions around the acquisition process. Don't Talk to Corp Dev. January 2015 Corporate Development, aka corp dev, is the group within companies that buys other companies. 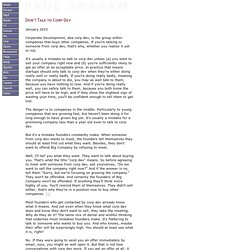 If you're talking to someone from corp dev, that's why, whether you realize it yet or not. It's usually a mistake to talk to corp dev unless (a) you want to sell your company right now and (b) you're sufficiently likely to get an offer at an acceptable price. In practice that means startups should only talk to corp dev when they're either doing really well or really badly. If you're doing really badly, meaning the company is about to die, you may as well talk to them, because you have nothing to lose. The danger is to companies in the middle. But it's a mistake founders constantly make. Well, I'll tell you what they want. Most founders who get contacted by corp dev already know what it means. No. The Rise Of Micro Startup Acquisitions. Editor’s note: Amit Paka is a co-founder at Parable, a Creative Photo Network for iOS. 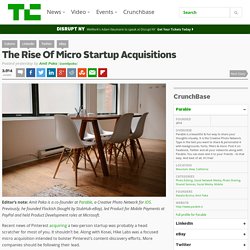 Previously, he founded Flockish (bought by StubHub-eBay), led Product for Mobile Payments at PayPal and held Product Development roles at Microsoft. Recent news of Pinterest acquiring a two-person startup was probably a head scratcher for most of you. It shouldn’t be. Along with Kosei, Hike Labs was a focused micro acquisition intended to bolster Pinterest’s content-discovery efforts. More companies should be following their lead. Technology companies have historically targeted startups with established products, proven revenue streams and, thereby, hundreds of employees for billions in capital. Facebook, Google, Twitter, Apple, LinkedIn and even eBay have been trailblazers. Costs to release software products have been diminishing rapidly while more distribution channels are being constantly added. Consequently, we are headed into an exciting era of micro team acquisitions. Product Talent Cost Attitude.