Your Brain Limits You to Just Five BFFs. Back in the 1990s, the British anthropologist Robin Dunbar noticed a remarkable correlation between primate brain size and the social groups they formed. 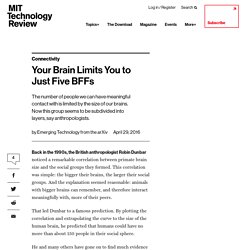 This correlation was simple: the bigger their brains, the larger their social groups. And the explanation seemed reasonable: animals with bigger brains can remember, and therefore interact meaningfully with, more of their peers. That led Dunbar to a famous prediction. By plotting the correlation and extrapolating the curve to the size of the human brain, he predicted that humans could have no more than about 150 people in their social sphere. He and many others have gone on to find much evidence for Dunbar’s number in the sizes of hunter-gatherer societies, Roman legions, and effective businesses. In recent years, Dunbar has taken his idea further by taking into account the emotional closeness between individuals. Individuals, he says, generally have up to five people in the closest layer. The Science of Familiar Strangers: Society's Hidden Social Network.

We’ve all experienced the sense of being familiar with somebody without knowing their name or even having spoken to them. 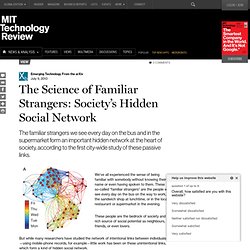 These so-called “familiar strangers” are the people we see every day on the bus on the way to work, in the sandwich shop at lunchtime, or in the local restaurant or supermarket in the evening. These people are the bedrock of society and a rich source of social potential as neighbours, friends, or even lovers. But while many researchers have studied the network of intentional links between individuals—using mobile-phone records, for example—little work has been on these unintentional links, which form a kind of hidden social network. The results are a fascinating insight into this hidden network of familiar strangers and the effects it has on people.

All this is made possible by the Singaporean bus service’s smart card ticketing system. Facebook's '3.74 degrees of separation' is a world away from being significant. This week Facebook announced that there are on average just 3.74 intermediate friends separating one user from another. 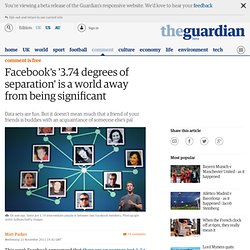 They then stood back and waited for us all to be duly amazed. Well, let's throw some numbers at the Facebook wall and see what sticks. A few months ago I was on Facebook looking for a practitioner of pseudoscience whom I was in the process of annoying with facts (it's a hobby of mine). When I eventually found them, Facebook kindly told me that we already had a friend in common.

How The Friendship Paradox Makes Your Friends Better Than You Are. Back in 1991, the sociologist Scott Feld made a surprising discovery while studying the properties of social networks. 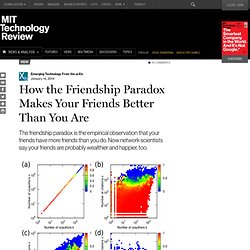 Feld calculated the average number of friends that a person in the network has and compared this to the average number of friends that these friends had. Against all expectations it turned out that the second number is always bigger than the first. Or in other words, your friends have more friends than you do. How to Find the Best Connected Individual in Your Social Network. The study of networks has exploded in recent years. 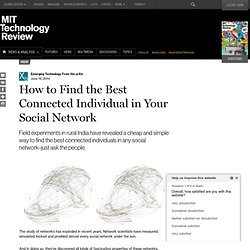 Network scientists have measured, simulated, kicked and prodded almost every social network under the sun. And in doing so, they’ve discovered all kinds of fascinating properties of these networks, properties that allow them to better understand the spread information and the role that people play in this process. In particular, theorists have long known that better connected individuals play more important roles in a network because they allow information to spread more efficiently. Why Being The Most Connected Is A Vanity Metric. The Dunbar Number, From the Guru of Social Networks.

A little more than 10 years ago, the evolutionary psychologist Robin Dunbar began a study of the Christmas-card-sending habits of the English. 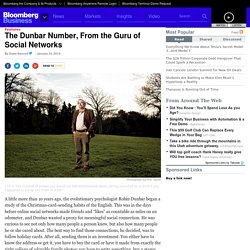 This was in the days before online social networks made friends and “likes” as countable as miles on an odometer, and Dunbar wanted a proxy for meaningful social connection. He was curious to see not only how many people a person knew, but also how many people he or she cared about. The best way to find those connections, he decided, was to follow holiday cards. After all, sending them is an investment: You either have to know the address or get it; you have to buy the card or have it made from exactly the right collage of adorable family photos; you have to write something, buy a stamp, and put the envelope in the mail.

These are not huge costs, but most people won’t incur them for just anybody. Human Brain Limits Twitter Friends to 150. Back in early 90s, the British anthropologist Robin Dunbar began studying the social groups of various kinds of primates. 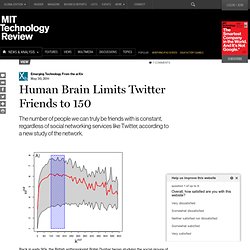 Before long, he noticed something odd. Primates tend to maintain social contact with a limited number of individuals within their group. But here’s the thing: primates with bigger brains tended to have a bigger circle of friends. Dunbar reasoned that this was because the number of individuals a primate could track was limited by brain volume. Then he did something interesting. Since then, various studies have actually measured the number of people an individual can maintain regular contact with. What’s more, this number appears to have been constant throughout human history–from the size of neolithic villages to military units to 20th century contact books.

But in the last decade or so, social networking technology has had a profound influence on the way people connect. Not so say Bruno Goncalves and buddies at Indiana University. The Limits of Friendship. Robin Dunbar came up with his eponymous number almost by accident. 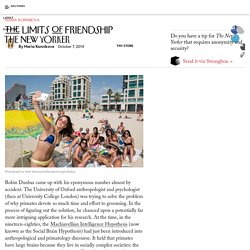 The University of Oxford anthropologist and psychologist (then at University College London) was trying to solve the problem of why primates devote so much time and effort to grooming. The magic Dunbar number: Why Communist societies and operating groups should be fewer than 150 people  If you have plans to start a Communist society, it would behoove you to cap your group at 150 and cut yourself off from the rest of the world, because after that point, it becomes nearly impossibly for everyone to know who everyone else is while also understanding their interrelationships. 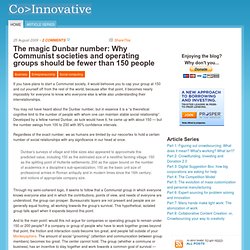 You may not have heard about the Dunbar number, but in essence it is a “a theoretical cognitive limit to the number of people with whom one can maintain stable social relationship”. Developed by a fellow named Dunbar, as luck would have it, he came up with about 150 — but the number swings from 100 to 230 with 95% confidence intervals. James B. Glattfelder: Who controls the world? Malcolm Gladwell On Occupy Wall Street And Organizational Hierarchy.