WCC. Facebook. Map of all English Premier and football league teams. Home - Fans guide to football grounds and stadiums in England, Scotland, Wales and Ireland. The Coaching Manual. Soccer coaching drill for maintaining a basic team shape. This is one of the very few soccer drills that I use with my older teams. 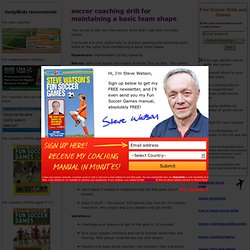 I've found it a very useful way to practise passing and receiving skills while at the same time maintaining a basic team shape. Experience: intermediate (U10s) upwards. Set-up: split your squad into teams of three, four or five. Two teams per 30 yards long by 20 yards wide playing area. The playing area(s) have a goal at each end. Put one team in each half. How to play: the objective of this soccer drill is for the players to move forwards, passing the ball between each other while keeping their shape. Start by having the players pass the ball between themselves while they are stationary. Goal-kick selection drill. Soccer drill procedure We will start with two simple sequences that will end on two goal-kicks. 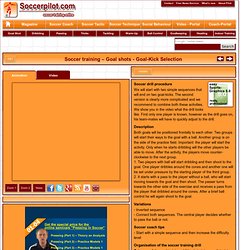 The second version is clearly more complicated and we recommend to combine both these activities. We show you in the video what the drill looks like. First only one player is known, however as the drill goes on, his team-mates will have to quickly adjust to the drill. Description. Dribbling book.pdf. The_OYSA_Academy_Approach_April_09.pdf. TheDOCandRecreationalSoccer.pdf. US Youth Soccer Introduces Practice Guides for the U6-U8, U-10 and U-12 Age Groups. FRISCO, Texas (May 1, 2013) — The US Youth Soccer Coaching Department has introduced its latest coaching resources with three age-specific practice activity guides. 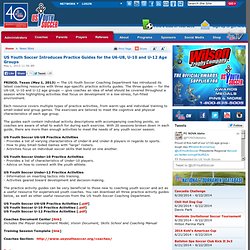 The three guides — for the U6-U8, U-10 and U-12 age groups — give coaches an idea of what should be covered throughout a season while highlighting activities that focus on development in a low-stress, fun-filled environment. Each resource covers multiple types of practice activities, from warm-ups and individual training to small-sided and group games. The exercises are tailored to meet the cognitive and physical characteristics of each age group. The guides each contain individual activity descriptions with accompanying coaching points, so coaches are aware of what to watch for during each exercise. With 20 sessions broken down in each guide, there are more than enough activities to meet the needs of any youth soccer season.

Training Session Template [link] Coaches Section: The Official Site of Massachusetts Youth Soccer. Soccer Coaching - Coaching Soccer 101. #1 KEEP IT FUN Picture yourself at the bank and your the last person in a 12 person line. 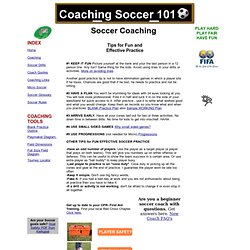 Any fun? Same thing for the kids. Avoid using lines in your drills or activities. More on avoiding lines Another good practice tip is not to have elimination games in which a player sits if he loses. Youth Soccer Tips: Coaching Effectively While Coaching Your Own Child on SoccerNation News Soccer News. Youth Soccer Insights: Coaching Effectively While Coaching Your Own Child A coach confronts specific dilemmas and challenges when coaching his/her own child and all eyes are on them and one very special heart. 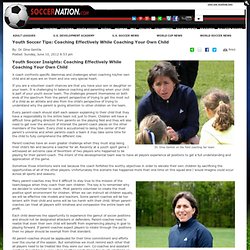 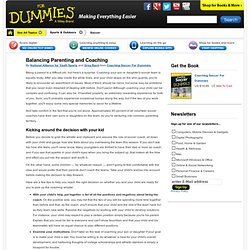 After you step inside the white lines, and your child straps on the shin guards, you're likely to encounter an assortment of issues. Most of them should be minor, but some may be problems that you never even dreamed of dealing with before. Don't panic! Although coaching your child can be complex and confusing, it can also be, if handled properly, an extremely rewarding experience for both of you. Sure, you'll probably experience occasional bumps along the way, but if the two of you work together, you'll enjoy some very special memories to savor for a lifetime. And take comfort in the fact that you're not alone.

Coaching Your Own Child - Vienna Youth Soccer. Approximately 1 in 5 parents will become volunteer coaches for their child’s team. 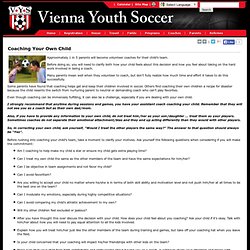 Before doing so, you will need to clarify both how your child feels about this decision and how you feel about taking on the hard work involved in being a coach. Many parents mean well when they volunteer to coach, but don’t fully realize how much time and effort it takes to do this successfully. Some parents have found that coaching helps get and keep their children involved in soccer. Others find coaching their own children a recipe for disaster because the child resents the switch from nurturing parent to neutral or demanding coach who can’t play favorites. Even though coaching can be immensely fulfilling, it can also be a challenge, especially if you are dealing with your own child. Coaching Your Own Child - Manalapan Soccer Club. From Coaching Youth Soccer - 3rd Edition by the American Sport Education Program Many coaches are parents, but the two roles should not be confused. 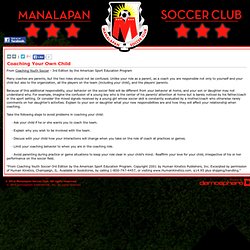 Unlike your role as a parent, as a coach you are responsible not only to yourself and your child but also to the organization, all the players on the team (including your child), and the players’ parents. Because of this additional responsibility, your behavior on the soccer field will be different from your behavior at home, and your son or daughter may not understand why.

For example, imagine the confusion of a young boy who is the center of his parents’ attention at home but is barely noticed by his father/coach in the sport setting. Or consider the mixed signals received by a young girl whose soccer skill is constantly evaluated by a mother/coach who otherwise rarely comments on her daughter’s activities. The Delight Of Coaching Your Own Child. AYSO Volunteers Discover The Magic Of Soccer Through Their Child’s Eyes By Mike Woitalla It's one of the greatest delights of parenthood. 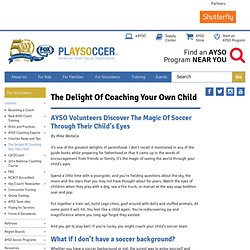 I don't recall it mentioned in any of the guide books while preparing for fatherhood or that it came up in the words of encouragement from friends or family. It's the magic of seeing the world through your child's eyes. Spend a little time with a youngster, and you're fielding questions about the sky, the moon and the stars that you may not have thought about for years. Put together a train set, build Lego cities, goof around with dolls and stuffed animals. And you get to play ball! The GPS Skills 11.