The Future of Cities – Oscar Boyson – Medium. What does “the future of cities” mean? 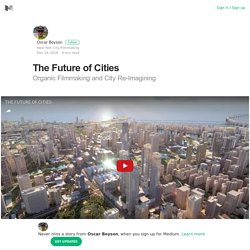 To much of the developing world, it might be as simple as aspiring to having your own toilet, rather than sharing one with over 100 people. To a family in Detroit, it could mean having non-toxic drinking water. For planners and mayors, it’s about a lot of things — sustainability, economy, inclusivity, and resilience. Most of us can hope we can spend a little less time on our commutes to work and a little more time with our families. For a rich white dude up in a 50th floor penthouse, “the future of cities” might mean zipping around in a flying car while a robot jerks you off and a drone delivers your pizza. I started shooting the “The Future of a Cities” as a collaboration with the The Nantucket Project, but it really took shape when hundreds of people around the world responded to a scrappy video I made asking for help.

Architect and former mayor of Curitiba Jaime Lerner famously said “if you want creativity, take a zero off your budget. Dr. Dr. Harvard Kennedy School - Cities: Laboratories of Innovation. The future of the United States is largely an urban one, as Americans old and young flock back to cities in ever increasing numbers. 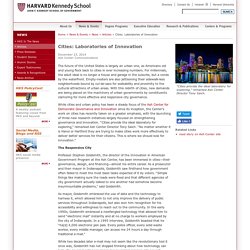 For millennials, the adult ideal is no longer a house and garage in the suburbs, but a condo by the waterfront. Empty-nesters are also jettisoning their sidewalk-less neighborhoods bound by cul-de-sacs for walkability and proximity to the cultural attractions of urban areas. With this rebirth of cities, new demands are being placed on the machinery of urban governments by constituents clamoring for more effective and responsive city governance. While cities and urban policy has been a steady focus of the Ash Center for Democratic Governance and Innovation since its inception, the Center’s work on cities has recently taken on a greater emphasis, with the launching of three new research initiatives largely focused on strengthening governance and innovation. “Cities provide the ideal laboratory for exploring,” remarked Ash Center Director Tony Saich. Boston’s Citywide Analytics Team. In Boston, when an ambulance arrives at an address in under six minutes, when a resident’s call to 311 is answered in less than 30 seconds, or when a restaurant inspector finds a health code violation before anyone gets sick, there is one common thread — Boston’s Citywide Analytics Team. 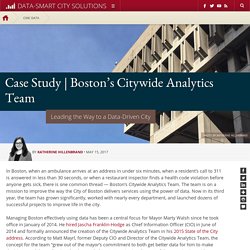 The team is on a mission to improve the way the City of Boston delivers services using the power of data. Now in its third year, the team has grown significantly, worked with nearly every department, and launched dozens of successful projects to improve life in the city. Managing Boston effectively using data has been a central focus for Mayor Marty Walsh since he took office in January of 2014.

Harvard Ash Center for Democratic Governance and Innovation - Accueil. Data-Smart City Solutions. Citizens give up data in blockchain project to improve cities. Nikada/Getty By Matt Reynolds Activism has never been so easy. 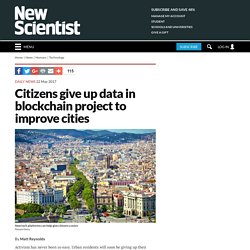 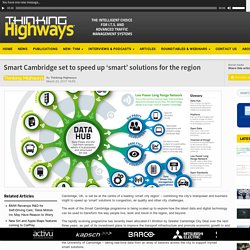 The work of the Smart Cambridge programme is being scaled up to explore how the latest data and digital technology can be used to transform the way people live, work and travel in the region, and beyond. The rapidly evolving programme has recently been allocated £1.6million by Greater Cambridge City Deal over the next three years, as part of its investment plans to improve the transport infrastructure and promote economic growth in and around Cambridge. Thousands of sensors will make Cambridge the world’s smartest city - Cambridge - Cambridge Independent. 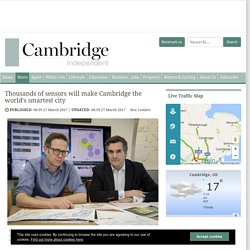 Picture: Keith Heppell Iliffe Media Ltd. Why Boston Is One Of The World’s Smartest Cities. Some context: I’m developing an accelerator program for impact ventures in Argentina for the University of San Andres. 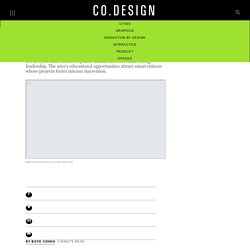 The purpose of this trip was to discuss potential collaborations and to gain insight into the myriad of programs within and outside of MIT in the Boston area that are focused on supporting, incubating, and accelerating startups. Outside of Silicon Valley, I am not sure there is a better innovation ecosystem in the world. For starters, some of the most important innovative institutions of higher learning in the world–MIT and Harvard–are only miles apart. There are also a dozen or so other important universities in the region, including Babson College–arguably the best entrepreneurship school in the world. ‘Smart Cambridge’ data hub to support futuristic projects to combat Cambridge congestion. 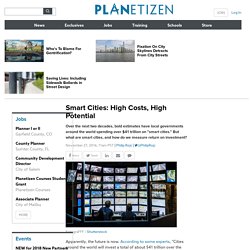 According to some experts, "Cities around the world will invest a total of about $41 trillion over the next 20 years to upgrade their infrastructure and benefit from the network of connected devices known as the Internet of Things. " That astronomical figure is an estimate, but it's a telling one. Aneri Pattani writes, "Smart technology uses the Internet of Things to gather data, connect components across the city and impact multiple departments or services in order to improve people's quality of life.

Spending on smart technology has grown from 0.7 percent of city IT budgets in 2005 to 4.1 percent in 2015. " Even smaller municipalities are investing in tech-oriented "solutions" created to address civic challenges. Significant milestone for Smart City development - standards organizations agree to work together to move cities to greater smartness. Cities need to make better use of resources and become more efficient: Policies, regulation, citizen involvement and standards are all key components needed to build a viable Smart City. 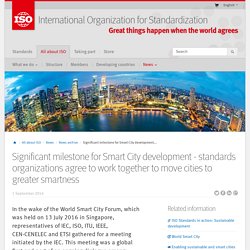 While all are important, in a path towards smarter cities, standardization will play a key role in ensuring consistent outcomes. Standards are relevant in the physical world, where they allow for the interconnection of hardware and technologies, but also in the virtual space where they facilitate data collection/sharing as well as city operation. 58c03164a635c. Getting Smarter About Smart Cities. Over the last five years, the concept of the technology-driven “smart city” has captured the imagination of public, private, and nonprofit leaders alike. 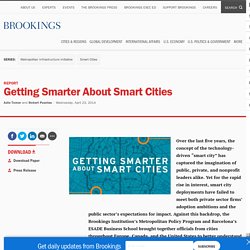 Yet for the rapid rise in interest, smart city deployments have failed to meet both private sector firms’ adoption ambitions and the public sector’s expectations for impact. Against this backdrop, the Brookings Institution’s Metropolitan Policy Program and Barcelona’s ESADE Business School brought together officials from cities throughout Europe, Canada, and the United States to better understand the promise and practice for smart cities around the world today. The discussion is timely as cities are responding to myriad pressures (e.g. population growth, climate change, fiscal stress) by seeking new more efficient ways of operating through the use of information and communications technologies.

The Brookings/ESADE discussion consisted of a two-day workshop to investigate how public sector innovations can contribute to this effort. I. An Error Occurred Setting Your User Cookie. Beer-Sheva is Big Winner as One of 7 Best Cities of Tomorrow around the Globe. Beer-Sheva is one of seven cities singled out by T3 Advisors and Brandeis International School’s first Global Technology Emerging Markets as cities of tomorrow for technology and life sciences due in great part to Ben-Gurion University of the Negev’s leadership role in the region. T3 Advisors, a global corporate real estate services and consulting firm, and the Brandeis International Business School announced the results of the first of its kind joint Global Technology Emerging Markets study last month.

The study provides leaders at technology and life sciences firms with recommendations on the best the “cities of tomorrow”- based on key data and analysis of the competitive advantages. The study noted that BGU and its centers of excellence, including the emerging CyberSpark initiative have drawn significant international business to the city. Meanwhile, Israel ranked 5th out of 50 countries in Bloomberg’s Global Innovation Index 2015. Beer-Sheva Recognized as a “City of Tomorrow” - AABGU. City Notes: Bloomberg fund grants $1 million to Beersheba - Metro. What Does it Mean to Be a “Smart City?” - LABCITIES. Digitizing Sheffield Through Open Data. Sheffield is a thriving commercial center in northern England. Life was not always so idyllic: industrial decline led to significant economic migration out of the city between 1981 and 2001. However, Sheffield successfully fought back, creating new businesses and employment opportunities. Today it is a Core City, one of the UK’s eight leading cities committed to enhancing economic performance and making their cities better places to live, work, visit and do business.

To ensure the continuation of its economic growth, Sheffield developed an open data portal and became the largest UK city to purposefully digitize its services and better engage residents in their community. Key Considerations for Sheffield’s Open Data Initiative The existing Sheffield City Council (SCC) website did not allow the community to actively participate and the workflow for uploading datasets was cumbersome. Big Data and Smart Cities: How to find sinergies in between. In the context of Smart Cities, the universe of Big Data, IoT, M2M and other related technologies are a great ally for them to become in a tangible reality.

Moreover, the concept of intelligent city is not conceived in the margin of them, because, even if their developments are different, in one way or another will be debtor of them. In this article we will see how to carry out a smart city vision that unfailingly relies on large volumes of data. Smart City: A big challenge. Why smart cities need to become smarter about technology. Smart cities need to become more intelligent about the way they control everything, from traffic lights to the distribution of water. Cities across the world are experimenting with technology to improve the life of their residents, but many are installing technology in a fragmented way. By submitting your personal information, you agree that TechTarget and its partners may contact you regarding relevant content, products and special offers. You also agree that your personal information may be transferred and processed in the United States, and that you have read and agree to the Terms of Use and the Privacy Policy.

The problem is that smart technology systems have yet to be connected, with a system performing a function in one part of a town separate from a system performing another function in a different area. Chris Harding, director of interoperability at independent IT standards group Open Group, is on a quest to change that. A Starter Kit for Data-Smart Cities. City of Boston using data to improve firefighting and other services, report says. What Works Cities - What Works Cities. OpenGrid for Smart Cities. שולחן עגול עיר חכמה - IT News. Chicago’s new smart sensor network is a game changer for city data - Curbed. Teaming to build the cities of the future. A Minister for Cities, great. Now for a Smart Cities discussion. Theconversation. Melbourne, Barcelona, San Francisco: three smart cities changing the world. Smart Cities with Public Safety and City Data Exchange. City of Chicago. Thematic Investing Smart Cities.

What being ‘smart’ means for cities - Raconteur. When a smart apartment meets a smart city... - CNET. Totem Power Envisions Smart Cities Of The Future. Four takeaways from Smart Cities Week. Building Your Next IOT and Smart City Solutions Using Smart Citizen Approach. The Road to Smart Cities and Connected Citizens: Are We There Yet? ראשי - smartcityisrael.co.il. Ynetnews Business - Modi'in to become a smart city. Can We Ever Really Build a "Smart City" ?

Ofer I did mention it to you but we said we would discuss it with Joanna it has to do with what field each of the large company's is dealing (Participating in) with in relation to SMART Cities. – parkoren

Yakov! i don't understand you find this and instead of running to me and show it you post it on pearl – ofer2