Edmond Locard, Sherlock Holmes, forensic science, exchange principle. „When a doctor does go wrong he is the first of criminals. 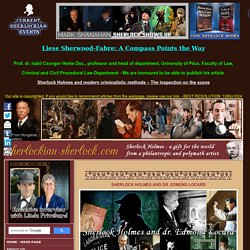 (339) Sherlock Trailer - Season 1 [TEH] Edmond Locard, Sherlock Holmes, forensic science, exchange principle. „When a doctor does go wrong he is the first of criminals. 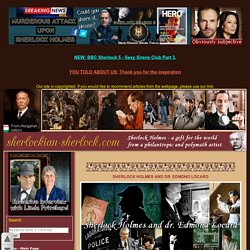 He has nerve and he has knowledge.” – said Sherlock Holmes. Him and dr. Edmond Locard proved that if a scientist is on the side of justice, with the same abilities he will be the king of criminal investigators. Edmond Locard was born in France on the 13th of December 1877. Just a few things are known about his life. „The happiness of your life depends upon the quality of your thoughts. Edmond Locard freed himself with his thoughts, so nothing could stop him - he became a really significant man. 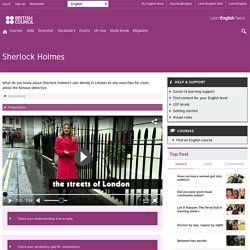 But not all the famous characters associated with this city were real. More than a hundred years ago when people travelled by horse and cart and the foggy streets were lit by gaslight, one famous detective was leading the fight against crime. True Crime — When sir Arthur Conan Doyle traveled from... Six methods of detection in Sherlock Holmes.

Between Edgar Allan Poe’s invention of the detective story with The Murders in the Rue Morgue in 1841 and Sir Arthur Conan Doyle’s first Sherlock Holmes story A Study in Scarlet in 1887, chance and coincidence played a large part in crime fiction. Nevertheless, Conan Doyle resolved that his detective would solve his cases using reason. He modeled Holmes on Poe’s Dupin and made Sherlock Holmes a man of science and an innovator of forensic methods. Holmes is so much at the forefront of detection that he has authored several monographs on crime-solving techniques. In most cases the well-read Conan Doyle has Holmes use methods years before the official police forces in both Britain and America get around to them. Locard's exchange principle. In forensic science, Locard's principle holds that the perpetrator of a crime will bring something into the crime scene and leave with something from it, and that both can be used as forensic evidence. 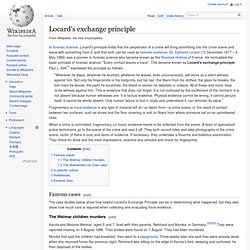 Dr. Edmond Locard (13 December 1877 – 4 May 1966) was a pioneer in forensic science who became known as the Sherlock Holmes of France. He formulated the basic principle of forensic science: "Every contact leaves a trace". This became known as Locard's exchange principle. Paul L. "Wherever he steps, whatever he touches, whatever he leaves, even unconsciously, will serve as a silent witness against him. Fragmentary or trace evidence is any type of material left at—or taken from—a crime scene, or the result of contact between two surfaces, such as shoes and the floor covering or soil, or fibers from where someone sat on an upholstered chair. When a crime is committed, fragmentary (or trace) evidence needs to be collected from the scene. Famous cases[edit] The Weimar children murders[edit] Forensics: The Anatomy of Crime review – the grisly evolution of swab justice.

The other day, friends of ours were raided by the Metropolitan police, who confiscated computers and digital storage devices on suspicion of paedophile activity. 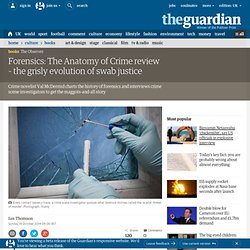 The couple had neglected to secure their modem with a password, but the police needed to make sure that the modem had indeed been “compromised”. After eight weeks, the computers came back with no evidence on them of child pornography. “It’s a horrible thing for you and your family to have gone through,” said the detective constable apologising for the unjust suspicion. A perfect stranger had apparently parked his car outside the family house and, using a smartphone, hacked into their Wi-Fi network.

Increasingly, cyberspace is where we are judged by others and, on occasion, even destroyed. Lombroso’s systematic mug shots and fingerprints of presumed delinquents anticipated police identikit and photofit taxonomies, which crudely divide the human face into constituent parts (aquiline nose, pug nose, flat nose). Sherlock Holmes Scientific Method. You are a natural Sherlock Holmes - deduction article. Many people believe that because Sherlock Holmes is a fictional character, you cannot do what he did in real life. 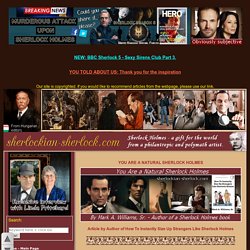 How about if you see a man with a black eye and swollen lips? Sherlock Holmes trained himself to perform these mental gymnastics through practice and study. People who watch celebrities and politicians on television, in magazines and in newspapers are also performing Holmesian type deductions. I’ve been practicing the techniques each day trying to get better. Police Technology - Forensic Science History. Forensic science is a scientific method of gathering and examining the evidence. 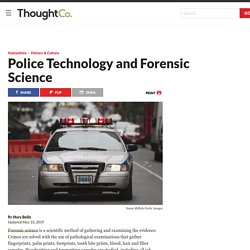 Crimes are solved with the use of pathological examinations that gather fingerprints, palm prints, footprints, tooth bite prints, blood, hair and fiber samples. Handwriting and typewriting samples are studied, including all ink, paper, and typography. Ballistics techniques are used to identify weapons, as well as voice identification techniques, are used to identify criminals.