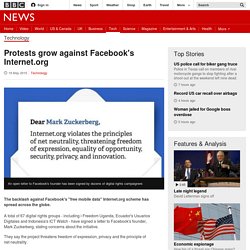 A total of 67 digital rights groups - including i Freedom Uganda, Ecuador's Usuarios Digitales and Indonesia's ICT Watch - have signed a letter to Facebook's founder, Mark Zuckerberg, stating concerns about the initiative. They say the project threatens freedom of expression, privacy and the principle of net neutrality.

Facebook continues to defend its offer. 27 Powerful Images That Sum up How Smartphones Are Ruining Our Lives - BlazePress. Thanks to smartphones we have never been so connected to people that can be as far as the other side of the world, whilst being left feeling disconnected from those right next to us. 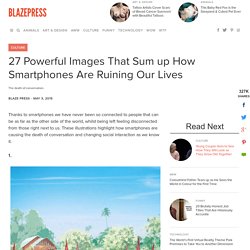 These illustrations highlight how smartphones are causing the death of conversation and changing social interaction as we know it. Check out these other articles: 30 Of The Most Powerful Images Ever These Controversial Illustrations Highlight the Ugly Side of Society 46 Incredible Things You Probably Haven't Seen Before. Mad Men is About People Working in an Office. Black Mirror Is About Advertising. The Dystopian Future of Holographic Protests. When Spain’s senate approved a series of controversial “citizen security” bills that would infringe on people’s civil liberties—including the right to protest in public—Spanish activists took action. 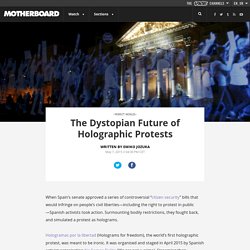 Carly Fiorina failed to register this domain. Pole-dancing robots go on show as part of London tech festival - London - News - London Evening Standard. Photo. Shelter Me A3 CROP. If You Were Honest On Social Media. A 'Game Of Thrones' star opens up about what she goes through online, and my heart hurts. Disappointed hands. Can the internet be saved without harming democracy? Citizens of the internet: here is some welcome news. 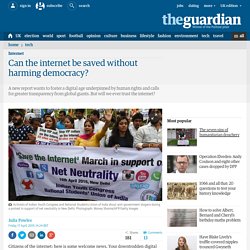 Your downtrodden digital rights might be getting a well-overdue booster shot. But it comes with some warnings. This week in the Hague, a high-level group of 29 internet policymakers and influencers – including prominent ex-US and UK security and intelligence officials Michael Chertoff, Joseph Nye, Melissa Hathaway and David Omand – issued a clarion call for the protection and promotion of human rights online.

Self-styled the Global Commission on Internet Governance, the group made this call as part of the broader objective of restoring trust and confidence in the internet. This clear and unambiguous statement is a mature recognition of both the environmental and legal reality: if we weaken security, even for the ostensibly “good” guys, we leave communications wide open for the bad guys, too. Who millennials trust, and don’t trust, is driving the new economy. By PricewaterhouseCoopers' projection, the biggest sectors of the "sharing economy" — including transportation and travel companies like Uber, Zipcar and Airbnb — could be pulling in as much as $335 billion in global revenue by 2025. 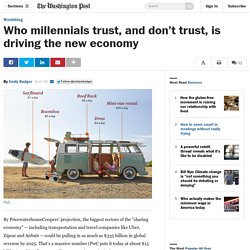 That's a massive number (PwC puts it today at about $15 billion), and it reflects according to a market analysis the company published this week some fundamental shifts in consumer behavior. The Apple Store’s Secret Strategy To Get You To Touch (And Buy) Its Laptops. Apple’s attention to detail, its subtle understanding of the way we interact with our machines, just never ceases to amaze. 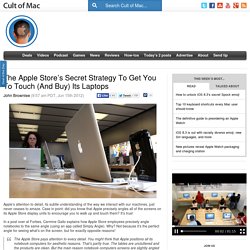 Case in point: did you know that Apple precisely angles all of the screens on its Apple Store display units to encourage you to walk up and touch them? It’s true! In a post over at Forbes, Carmine Gallo explains how Apple Store employees precisely angle notebooks to the same angle (using an app called Simply Angle). Rumi - Secret Places. Show program. Disturbing, not pleasing, should be art’s role. Many arts organisations have become dinosaurs, failing to evolve to respond to the needs of new work, delegates at the Australian Theatre Forum were warned. 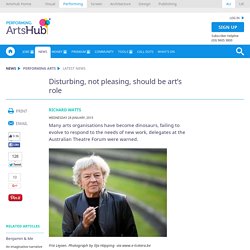 Frie Leysen. Photograph by Ilja Höpping via www.e-tcetera.be Belgian festival director and curator Frie Leysen challenged Australian artists and arts organisations to be bold, and to challenge an increasingly ossified status quo in her closing keynote address at the 2015 Australian Theatre Forum (ATF). Tinder Users at SXSW Are Falling for This Woman, but She's Not What She Appears. Well, this is sneaky—and for some, a little heartbreaking. 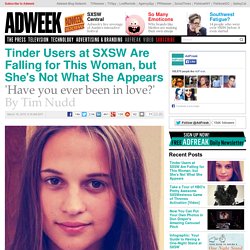 Smartphones: Planet of the phones. THE dawn of the planet of the smartphones came in January 2007, when Steve Jobs, Apple’s chief executive, in front of a rapt audience of Apple acolytes, brandished a slab of plastic, metal and silicon not much bigger than a Kit Kat. 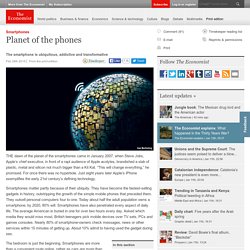 “This will change everything,” he promised. For once there was no hyperbole. Just eight years later Apple’s iPhone exemplifies the early 21st century’s defining technology. Smartphones matter partly because of their ubiquity. They have become the fastest-selling gadgets in history, outstripping the growth of the simple mobile phones that preceded them. Guardian's destroyed Snowden laptop to feature in major V&A show.

The remains of computers used to store top-secret documents leaked by the NSA whistleblower Edward Snowden, which were symbolically destroyed by Guardian editors while being watched by GCHQ representatives, are to be displayed at the V&A. 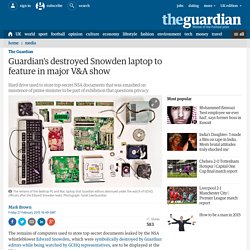 The smashed MacBook Air and Western Digital hard drive are to be part of a large exhibition staged across the V&A in the spring and summer asking questions around the role of museums in society. The laptop and drive were destroyed using angle grinders and drills on the insistence of the prime minister, David Cameron. The Guardian editor, Alan Rusbridger, described their destruction as “a peculiarly pointless piece of symbolism,” given the newspaper had told the government it held copies of the data overseas. Oliver Sacks on Learning He Has Terminal Cancer. Photo A MONTH ago, I felt that I was in good health, even robust health.