Goodwill Meditation Group. For many years a growing group of people in many parts of the world has been linking in thought each week and joining in a meditation on goodwill. 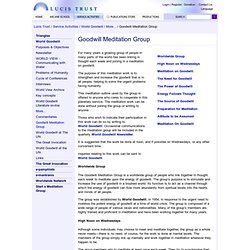 The purpose of this meditation work is to strengthen and increase the goodwill that is in all people, helping to solve the urgent problems facing humanity. This meditation outline used by the group is offered to anyone who cares to cooperate in this planetary service. The meditation work can be done without joining the group or writing to anyone. Those who wish to indicate their participation in this work can do so by writing to World Goodwill. Occasional communications to the meditation group will be included in the quarterly World Goodwill Newsletter. It is suggested that the work be done at noon, and if possible on Wednesdays, or any other convenient time. Inquiries relating to this work can be sent to World Goodwill Worldwide Group High Noon on Wednesdays The group members aim to meditate at least once each week. 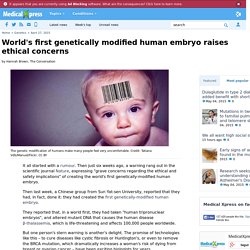 Then just six weeks ago, a warning rang out in the scientific journal Nature, expressing "grave concerns regarding the ethical and safety implications" of creating the world's first genetically-modified human embryo. Then last week, a Chinese group from Sun Yat-sen University, reported that they had, in fact, done it: they had created the first genetically-modified human embryo. They reported that, in a world first, they had taken "human tripronuclear embryos", and altered mutant DNA that causes the human disease β-thalassemia, which is life-threatening and affects 100,000 people worldwide.

But one person's stern warning is another's delight. The promise of technologies like this – to cure diseases like cystic fibrosis or Huntington's, or even to remove the BRCA mutation, which dramatically increases a woman's risk of dying from breast or ovarian cancer – have been exciting biologists for years. Cut and paste So what exactly did the Chinese researchers do? 3 Ways to Simplify Your Life. EmailShare An uncluttered, simple life and an unburdened, clear mind are both very key for spiritual practice and the practice of meditation. 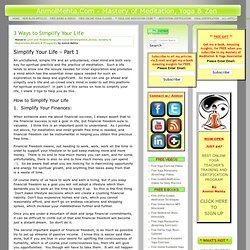 Such a life tends to allow one the leisure needed for inner exploration and promotes a mind which has the essential inner space needed for such an exploration to be deep and significant. So how can one go ahead and simplify one’s life and un-crowd one’s mind in order to set this platform for spiritual evolution? COLLECTIVE INTELLIGENCE. It's also possible for groups of people to work together in ways that seem pretty stupid, and I think collective stupidity is just as possible as collective intelligence. 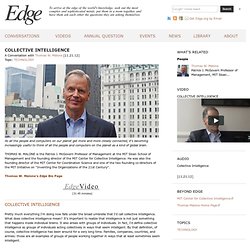 But in whatever form, either intelligence or stupidity, this collective behavior has existed for a long time. What's new, though, is a new kind of collective intelligence enabled by the Internet. Think of Google, for instance, where millions of people all over the world create web pages, and link those web pages to each other.

Then all that knowledge is harvested by the Google technology so that when you type a question in the Google search bar the answers you get often seem amazingly intelligent, at least by some definition of the word "intelligence. " The first was the average social perceptiveness of the group members. People's Movement for Human Rights Education. So the Poor are People…Really? – Casaubon's Book. A week ago, one of our former foster sons celebrated his ninth birthday. 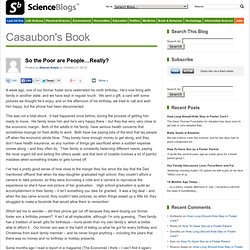 He’s now living with family in another state, and we have kept in regular touch. We sent a gift, a card with some pictures we thought he’d enjoy, and on the afternoon of his birthday, we tried to call and wish him happy, but the phone had been disconnected. This was not a total shock. It had happened once before, during the process of getting him ready to move. His family loves him and he’s very happy there – but they live very, very close to the economic margin. I’ve had a pretty good sense of how close to the margin they live since the day that the Dad mentioned offhand that when his step-daughter graduated high school, they couldn’t afford a camera to take pictures, so they were borrowing a robe and a camera to reproduce the experience so she’d have one picture of her graduation. Which led me to wonder – did their phone get cut off because they were buying our former foster son a birthday present?

Sharon. Your left side is your best side.