A-i4655s. Why Do I End Up Throwing Out So Much Food? The environmental case for eating vegetarian, in one sentence. California's devastating drought is focusing attention on the water footprint of various foods — particularly delicious, delicious almonds, which require about a gallon of water each. 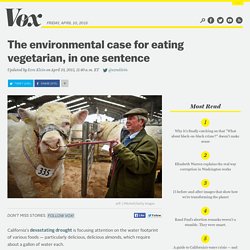 But as various analyses show, red meat is far worse than even almonds on this score. It takes almost twice as much water to produce a calorie of beef as it does to create a calorie of almonds. Any discussion of how to eat to best preserve water needs to begin with this sentence: the water footprint (WF) of any animal product is larger than the WF of a crop alternative with equivalent nutritional value. That's from an analysis water expert Arjen Y. Almonds are getting a lot of attention because California is in drought and California produces a ton of almonds. It's grains, meats, and starches that dominate global diets and thus global water use. It's not just water Of course, water isn't the only resource we should worry about agriculture using. World Resources Institute And that's good news, in a way. For Businesses - Feedback. Consulta Regional a Expertos en Pérdidas y Desperdicios de Alimentos  Food Waste Is Becoming Serious Economic and Environmental Issue, Report Says.

WASHINGTON — With millions of households across the country struggling to have enough to eat, and millions of tons of food being tossed in the garbage, food waste is increasingly being seen as a serious environmental and economic issue. 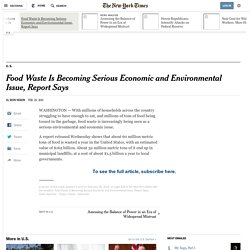 A report released Wednesday shows that about 60 million metric tons of food is wasted a year in the United States, with an estimated value of $162 billion. About 32 million metric tons of it end up in municipal landfills, at a cost of about $1.5 billion a year to local governments. The problem is not limited to the United States. The report estimates that a third of all the food produced in the world is never consumed, and the total cost of that food waste could be as high as $400 billion a year.

Reducing food waste from 20 to 50 percent globally could save $120 billion to $300 billion a year by 2030, the report found. But it is not just those countries that have problems with food waste. Ms. Mr. Directorio y Observatorio de Residuos 2015 by Emeres. VII° Seminario de Valorización de Residuos Orgánicos en Chile - Portal Sistema Nacional de Información Ambiental - Gobierno de Chile. A-i3942s.pdf. Food Waste: The Next Food Revolution. Half the food in the last year was thrown out. 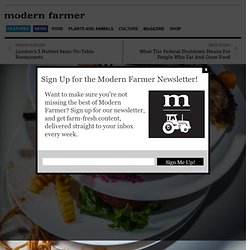 One billion people are hungry. The next food revolution is about what you're not eating. By Jesse Hirsch and Reyhan Harmanci on September 30, 2013 Photography by Grant Cornett How are we going to feed 9 billion people by 2050? But are we missing the point? Do the math. We need to start somewhere. Farm to Table to Landfill In Hackettstown, New Jersey, vegetable farmer Greg Donaldson leads informal tours around his fields to show visitors a large rotting pile of mostly edible produce. The pile is a hub for perfectly good cucumbers (bent), strawberries (overripe but delicious), tomatoes (small blemishes), peaches (bruised) and garlic (split cloves). And this early-stage waste is only the beginning. Still, all this pre-consumed food waste doesn’t let consumers off the hook. 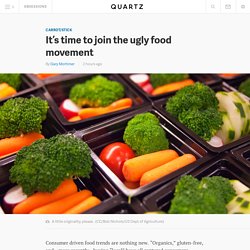 “Organics,” gluten-free, and—more recently—buying “local” have all captured consumers, encouraging supermarkets around the globe and in Australia to respond. But an emerging food trend in Europe may have the biggest impact on what we buy each week: ugly food. What is the “ugly food” movement? It is estimated that one-third of all the food produced in the world is never consumed, with the total cost of that food waste as high as $400 billion a year. In response to the European Commission’s plan to make 2014 the “European Year Against Food Waste” and the EU’s scrapping of rules that prevented the sale of oddly-sized or misshapen fruit and vegetables, supermarkets across Europe were quick to respond. The overarching objective of the ugly food movement is to reduce food waste, by selling to consumers those fruit and vegetables that would normally be either rejected by supermarket buyers or dumped by farmers.