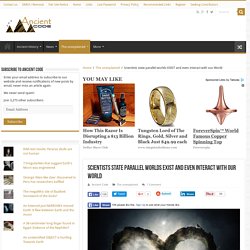 How they did it! Mandela Effect EXPLAINED!!! Quantum Theory - Full Documentary HD. How Quantum Mechanics Could Be Even Weirder. Why doesn’t the world make sense? 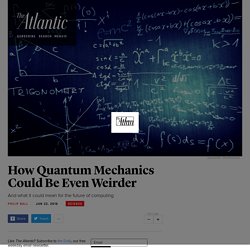 At the fundamental level of atoms and subatomic particles, the familiar “classical” physics that accounts for how objects move around gives way to quantum physics, with new rules that defy intuition. Traditionally these are expressed as paradoxes: particles that can be in two places at once, cats that are simultaneously alive and dead, apparently impossible faster-than-light signaling between distant particles. Have We Been Interpreting Quantum Mechanics Wrong This Whole Time? For nearly a century, “reality” has been a murky concept. 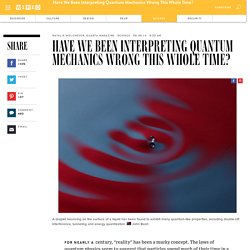 The laws of quantum physics seem to suggest that particles spend much of their time in a ghostly state, lacking even basic properties such as a definite location and instead existing everywhere and nowhere at once. Only when a particle is measured does it suddenly materialize, appearing to pick its position as if by a roll of the dice. Quantum physics: What is really real? Dan Harris/MIT An experiment showing that oil droplets can be propelled across a fluid bath by the waves they generate has prompted physicists to reconsider the idea that something similar allows particles to behave like waves. 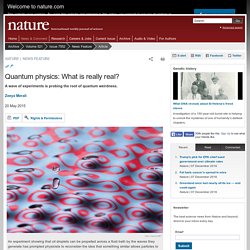 Owen Maroney worries that physicists have spent the better part of a century engaging in fraud. Ever since they invented quantum theory in the early 1900s, explains Maroney, who is himself a physicist at the University of Oxford, UK, they have been talking about how strange it is — how it allows particles and atoms to move in many directions at once, for example, or to spin clockwise and anticlockwise simultaneously.

But talk is not proof, says Maroney. Forbidden Physics : Science Cannot Explain These Things [FULL VIDEO] Our Holographic Bodies, Saturn-Moon Matrix & Blood Over Intent Explanation. WILL WE EVER UPLOAD OUR BRAINS.DOCUMENTARY. The Living Matrix Full Length. How Is This Possible? Scientists Observe ONE Particle Exist In MULTIPLE States. “Matter”: it’s what atoms and molecules are made up of. 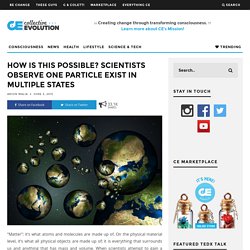 On the physical material level, it’s what all physical objects are made up of; it is everything that surrounds us and anything that has mass and volume. When scientists attempt to gain a better understanding of the nature of our reality, matter is what they look to. However, when scientists observe matter at the smallest possible level, they are left with more questions than answers.

This is thanks to the fact that a tiny piece of matter, like a photon, or an electron, can exist in multiple possible states (as a “wave”) even though it is one single particle… which makes absolutely no sense. “We choose to examine a phenomenon which is impossible, absolutely impossible, to explain in any classical way, and which has in it the heart of quantum mechanics. 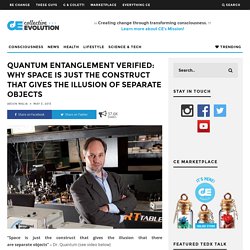 Quantum (see video below) There is a phenomenon so strange, so fascinating, and so counter to what we believe to be the known scientific laws of the universe, that Einstein himself could not wrap his head around it. It’s called “quantum entanglement,” though Einstein referred to it as “spooky action at a distance.” Holographic Universe 1. String Theory Co-Founder: Sub-Atomic Particles Are Evidence the Universe Was Created. 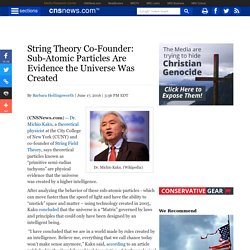 Michio Kaku. (Wikipedia) (CNSNews.com) -- Dr. The Game of Life and How to Play It! 6th August 2016 By Nanice Ellis Contributing writer for Wake Up World This is a companion article to my article ‘Are We Living in a Simulated Reality?’ 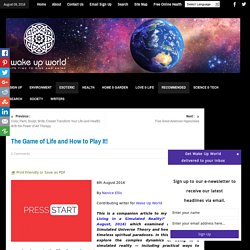 We May Be Living in the Matrix, Says Engineer. By Tara MacIsaac, contributor for TheEpochTimes.com In Beyond Science, Epoch Times explores research and accounts related to phenomena and theories that challenge our current knowledge. 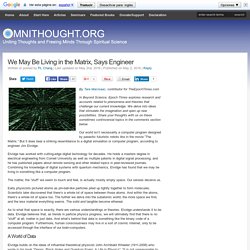 We delve into ideas that stimulate the imagination and open up new possibilities. Share your thoughts with us on these sometimes controversial topics in the comments section below. Quantum Phase: Time Travel, Parallel Realities & the Brain. I do not agree with all the information in this article. 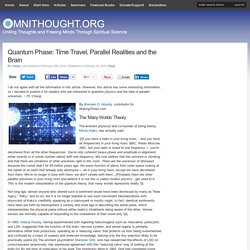 However, this article has some interesting information, so I decided to publish it for readers who are interested in quantum physics and the idea of parallel universes. ~ PL Chang By Brendan D. Murphy, contributor for WakingTimes.com The ‘Many Worlds’ Theory. Quantum Physicists: Why Time Is Not Real. By Bob Pershing, contributor for Learning-Mind.com According to certain theories in physics, the time is not real and is nothing but a product of our consciousness. Let’s explore these theories and the concept of the illusion of time. Our daily experience, as well as our predecessors’, regards time as a flowing entity that defines what we conceive to be the past and also what we conceive as the future.

A Simple Solution to the Particle / Wave Duality of Light and Matter, EPR, Non Locality & Quantum Entanglement. Note: This article was written several years ago. The basic code of the universe. The Morphogenetic and Holographic Universe. Thanks to Tom for sending me the link to the last video in this article. ~ PL The idea that the Universe is a hologram or holographic in nature is not a new idea.

Unlike a conventional hologram, the Holographic Universe is multidimensional in nature. If you do not know what a hologram is, it is like a photograph that uses light to project its image into a three dimensional object. The Artificial Matrix and the Hidden Agenda of Cryptocurrency. Most people who have done extensive research on the New World Order (NWO) know that the Controllers of this secret international organization and their masters (the Dark Forces) want to enslave the people of the world under a one world government, one world religion, and one world digital currency.

Unfortunately, only a very low percentage of them know about the artificial matrix and the true agenda of the Dark Forces. In many ways, the Dark Forces and the Controllers have already enslaved us, but they have not achieved their ultimate goal, which is total control of everything, including our minds and souls. The bad news is that they have already enslaved our souls to a large degree, but the good news is that they can only enslave our souls with our CONSENT.

Because the Dark Forces and the Controllers can NOT enslave us without our consent, they have to use the art of trickery to trick us to stay in their artificial matrix. How the Matrix Works: In the Beginning There Was CODE. The information in this article correlates well with the information in my three articles titled The Artificial Matrix and the Hidden Agenda of Cryptocurrency, How Words Can Be Used as Magic Spells and Theoretical Physicist Finds “Computer Code” in the Fabric of Space. Soul-Catching Net — Are We “Recycled” at Death to Remain in the Matrix? THE TWO MATRIXES. Ancient Knowledge- Full. Mark Passio's Natural Law Seminar - Natural Law: The REAL Law of Attraction 2 of 3 (afternoon) Ghost Car Disappears During Police Chase. Parallel worlds exist and interact with our world, say physicists. Quantum mechanics, though firmly tested, is so weird and anti-intuitive that famed physicist Richard Feynman once remarked, "I think I can safely say that nobody understands quantum mechanics.

Do Parallel Universes Interact With Each Other? (Video) Parallel universes exist and interact with one another, according to researchers at Griffith University in Queensland, Australia who found that our universe is one of a “gigantic number of worlds” that all collide with one another. Nothing Is Solid & Everything Is Energy – Scientists Explain The World of Quantum Physics. It has been written about before, over and over again, but cannot be emphasized enough.

Preston Nichols - May 11, 2012 Interview - Montauk Project, Time Travel & Alternate Realities. What If The Matrix is Real 2014. 3 Scientific Theories About The Multiverse And How It Works! Simulation Shows Time Travel Is Possible on a Quantum Level - Galactic ConnectionGalactic Connection. How to Lose Your Mind and Create a New One.

Introduction: Quantum World - physics-math - 04 September 2006. Dolores Cannon Speaks On How We Create Our Reality - Galactic ConnectionGalactic Connection. Soul Groups, Parallel Lives and Direct Source Incarnations. Brad Austen: The Different Dimensions and Our Multidimensional Selves. M-THEORY & STRING THEORY [Full Documentary][NOVA] Scientific Proof Thoughts & Intentions Create Physical Reality and How Advertisers Exploit This. What the Hell Are Tachyons? How the Universe Responds to Your Energetic Vibration, Explained. A new key to unlocking the mysteries of physics? Quantum turbulence. Quantum physics proves that there IS an afterlife, claims scientist.

Energy Tools for Personal and Spiritual Growth. Shift_ebook_english_0. The Universe is an Illusion, But Consciousness Isn't. Quantum Jumping - Communicate With Your Subconscious Mind. TVO S James Gates on Does Reality have a Genetic Basis. The Law of Attraction - Beyond The Secret...The Moses Code. Law of Attraction - 11 Forgotten Laws. The SECRET for Undetectable Mind Control. David Icke: The Vibrational Code That Will Bring Down the Control Matrix. Pathway To Self-Actualization. Your Inner and Outer Dimensions: Balancing Science and Spirituality. Mind over Matter: Secrets of Human Aura. Mind-Matter Interaction Princeton Research. Alchemy and the End of Time, Offplanet Radio, Aug. 22-2012. Holographic Universe Workshops. A Thin Sheet of Reality: The Universe as a Hologram.