Hyoscyamus niger. Hyoscyamus niger (commonly known as henbane),[1] also known as stinking nightshade or black henbane, is a plant of the family Solanaceae[1] that originated in Eurasia,[1] though it is now globally distributed. 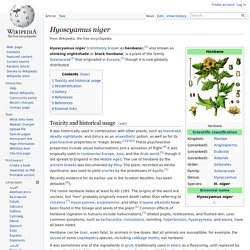 Toxicity and historical usage[edit] Recently evidence for its earlier use in the Scottish Neolithic has been debated.[6]). The name henbane dates at least to AD 1265. The origins of the word are unclear, but "hen" probably originally meant death rather than referring to chickens.[7] Hyoscyamine, scopolamine, and other tropane alkaloids have been found in the foliage and seeds of the plant.[1] Common effects of henbane ingestion in humans include hallucinations,[1] dilated pupils, restlessness, and flushed skin.

Less common symptoms, such as tachycardia, convulsions, vomiting, hypertension, hyperpyrexia, and ataxia, have all been noted. Henbane can be toxic, even fatal, to animals in low doses. Duboisia hopwoodii. Duboisia hopwoodii is a shrub native to the arid interior region of Australia. Nicotiana rustica. Nicotiana rustica, known in South America as mapacho and in Vietnam as thuoc lao (thuốc lào), is a plant in the Solanaceae family. It is a very potent variety of tobacco. The high concentration of nicotine in its leaves makes it useful for creating organic pesticides.

In Russia, N.rustica is called "makhorka" (махорка). It was smoked casually by the lower classes before normal tobacco became widely available (after WWII), and is still sometimes smoked by peasants and farmers. Nicotiana rustica leaves have a nicotine content as high as 9%, whereas Nicotiana tabacum (common tobacco) leaves contain about 1 to 3%.[3] Thuốc lào[edit] In Vietnam, it is most commonly smoked after a meal on a full stomach to "aid in digestion", or along with green tea or local beer (most commonly the cheap "bia hoi").

Solanaceae. The name Solanaceae derives from the genus Solanum, "the nightshade plant". The etymology of the Latin word is unclear. The name may come from a perceived resemblance of certain solanaceous flowers to the sun and its rays. At least one species of Solanum is known as the "sunberry". Alternatively, the name could originate from the Latin verb solari, meaning "to soothe", presumably referring to the soothing pharmacological properties of some of the psychoactive species of the family. The family has a worldwide distribution, being present on all continents except Antarctica. The Solanaceae include a number of commonly collected or cultivated species. - Burncoose Nurseries - plants by mail order direct to you - Camellia, Magnolia and Rhododendron Specialists. Atropa belladonna. Atropa belladonna or Atropa bella-donna, commonly known as belladonna or deadly nightshade, is a perennial herbaceous plant in the family Solanaceae, native to Europe, North Africa, Western Asia, and some parts of Canada and the United States. 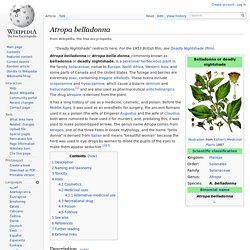 The foliage and berries are extremely toxic, containing tropane alkaloids. Nicotiana. Etymology[edit] The word nicotiana (as well as nicotine) was named in honor of Jean Nicot, French ambassador to Portugal, who in 1559 sent it as a medicine to the court of Catherine de' Medici.[4] Cultivation[edit] Ecology[edit] Despite containing enough nicotine and/or other compounds such as germacrene and anabasine and other piperidine alkaloids (varying between species) to deter most herbivores,[5] a number of such animals have evolved the ability to feed on Nicotiana species without being harmed. Nonetheless, tobacco is unpalatable to many species and therefore some tobacco plants (chiefly Tree Tobacco, N. glauca) have become established as invasive species in some places. In the nineteenth century, young tobacco plantings came under increasing attack from flea beetles (Epitrix cucumeris and/or Epitrix pubescens), causing destruction of half the United States tobacco crop in 1876.

Datura. Some South American plants formerly thought of as Datura are now treated as belonging to the distinct genus Brugmansia[1] (Brugmansia differs from Datura in that it is woody, making shrubs or small trees, and it has pendulous flowers, rather than erect ones). Other related genera include Hyoscyamus and Atropa. Etymology[edit] The Neo-Latin name Datura is taken from Hindi धतूरा dhatūra 'jimson weed',[2] ultimately from Sanskrit धत्तूर dhattūra 'white thorn-apple'.[3] Description[edit] The word datura comes from the sanskrit dhatūr ("thorn apple"); In Sanskrit it is referred as "Kanak" and "Unmatt" in the ancient scriptures of Indian Ayurveda by sage Sushrut and Charaka. Withania somnifera. Fruits Withania somnifera, known commonly as ashwagandha,[2] Indian ginseng,[3] poison gooseberry,[3] or winter cherry,[2] is a plant in the Solanaceae or nightshade family. 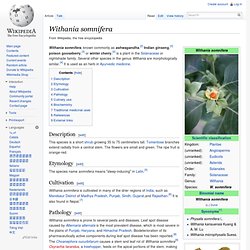 Several other species in the genus Withania are morphologically similar.[4] It is used as an herb in Ayurvedic medicine. Description[edit] This species is a short shrub growing 35 to 75 centimeters tall. Tomentose branches extend radially from a central stem. Mandrake (plant) The alkaloid chemicals contained in the root include atropine, scopolamine, and hyoscyamine. 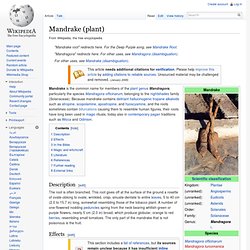