Apocynaceae. Cannabaceae. Asteraceae. Rubiaceae. Lamiaceae. Fabaceae. Succulents. Zygophyllaceae. Solanaceae. Miscellaneous. Malpighiaceae. Myristicaceae. Coffea. Cultivation and use[edit] Coffea berries, Bali Several species of Coffea may be grown for the beans. Coffea arabica accounts for 75-80 percent of the world's coffee production, while Coffea canephora accounts for about 20 percent.[1] The trees produce red or purple fruits called "cherries" that look like drupes, but are epigynous berries. The cherries contain two seeds, the so-called "coffee beans", which — despite their name — are not true beans. When grown in the tropics, coffee is a vigorous bush or small tree that usually grows to a height of 3–3.5 m (10–12 feet). The tree of Coffea arabica will grow fruits after three to five years, and will produce for about 50 to 60 years (although up to 100 years is possible).

Coffee flower Ecology[edit] The caffeine in coffee "beans" is a natural plant defense against herbivory, i.e. a toxic substance that protects the seeds of the plant. Coca. Erythroxylum coca is one of two species of cultivated coca. Description[edit] The coca plant resembles a blackthorn bush, and grows to a height of 2–3 m (7–10 ft).

The branches are straight, and the leaves, which have a green tint, are thin, opaque, oval, and taper at the extremities. A marked characteristic of the leaf is an areolated portion bounded by two longitudinal curved lines, one line on each side of the midrib, and more conspicuous on the under face of the leaf. The flowers are small, and disposed in little clusters on short stalks; the corolla is composed of five yellowish-white petals, the anthers are heart-shaped, and the pistil consists of three carpels united to form a three-chambered ovary. The leaves are sometimes eaten by the larvae of the moth Eloria noyesi. Camellia sinensis. Camellia sinensis is the species of plant whose leaves and leaf buds are used to produce the popular beverage tea.

It is of the genus Camellia (Chinese: 茶花; pinyin: Cháhuā, literally: "tea flower"), a genus of flowering plants in the family Theaceae. White tea, yellow tea, green tea, oolong, pu-erh tea and black tea are all harvested from this species, but are processed differently to attain different levels of oxidation. Kukicha (twig tea) is also harvested from Camellia sinensis, but uses twigs and stems rather than leaves. Artemisia absinthium. Description[edit] It grows naturally on uncultivated, arid ground, on rocky slopes, and at the edge of footpaths and fields.

18 of Nature’s Most Powerful Medicinal Plants. (Part of an Exclusive WebEcoist Series on Amazing Trees, Plants, Forests and Flowers) From marijuana to catnip, there are hundreds of remarkably common herbs, flowers, berries and plants that serve all kinds of important medicinal and health purposes that might surprise you: anti-inflammatory, anti-fungal, insect repellent, antiseptic, expectorant, antibacterial, detoxification, fever reduction, antihistamine and pain relief. 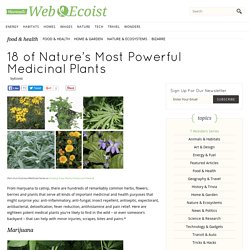 All species, however, enter into folk medicine, being used especially to reduce fevers and as antirheumatic agents. B. uniflora (as B. hopeana) has been included in the Brazilian pharmacopoeia. DATURAS (Datura) form a genus of some 20 species of the nightshade family, Solanaceae. JIMSON WEED or thorn apple (Datura stramonium) is an illscented weedy annual with white to purplish flowers. TOLOACHE (Datura inoxia; known also as D. meteloides), a coarser climbing annual native to Mexico and southwestern United States, has a long history of use as an hallucinogen. Sibundoy Indion witch doctor collecting leaves and flowers of Methysticodendron amesianum. Contents Next.