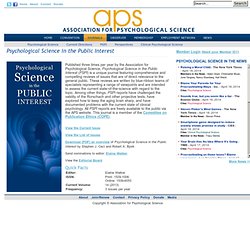 These reviews are written by blue-ribbon teams of specialists representing a range of viewpoints and are intended to assess the current state-of-the-science with regard to the topic. Among other things, PSPI reports have challenged the validity of the Rorschach and other projective tests, have explored how to keep the aging brain sharp, and have documented problems with the current state of clinical psychology. All PSPI reports are freely available to the public via the APS website. This journal is a member of the Committee on Publication Ethics (COPE). View the Current Issue View the List of Issues Download (PDF) an overview of Psychological Science in the Public Interest by Stephen J. The curse of the herd. Why Avoidance Coping is the Most Important Factor in Anxiety. Avoidance coping refers to choosing your behavior based on trying to avoid or escape particular thoughts or feelings. It can involve "doing" (e.g., someone who excessively washes their hands to try to get rid of fears about contamination) or "not doing" (e.g., when someone avoids having an awkward conversation).

What Your Facebook Account Says About Your Brain. Synesthetes: "People of the Future" Cheaters Always Win—The Paradox of Getting Ahead in America. I often write about how America's leading successes in politics and business cheat more than the rest of us (in their marriages, on their taxes, in gaining advantages for their children ). 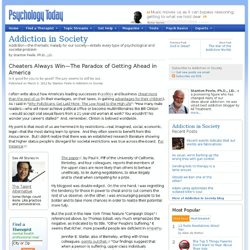 As I said in " Why Policiticans Get Laid More: The Low Road to the High Life ": "How many male readers—who will never achieve political office or become multimillionaires like Bill Clinton—would accept oral sexual favors from a 21-year-old woman at work? You wouldn't? No wonder your career's stalled! " And, remember, Clinton is beloved worldwide. Mental Health. Cognitive Psychology - The Brain (1-5)(THE BRAIN, MIND & CONSCIOUSNESS series) Right-wingers are less intelligent than left wingers, says controversial study - and conservative politics can lead people to be racist. Children with low intelligence grow up to be prejudicedRight-wing views make the less intelligent feel 'safe'Analysis of more than 15,000 people By Rob Waugh Updated: 09:54 GMT, 8 February 2012 Right-wingers tend to be less intelligent than left-wingers, and people with low childhood intelligence tend to grow up to have racist and anti-gay views, says a controversial new study. 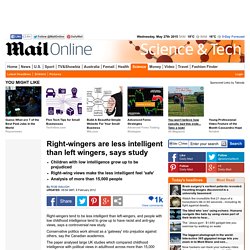 Conservative politics work almost as a 'gateway' into prejudice against others, say the Canadian academics. The paper analysed large UK studies which compared childhood intelligence with political views in adulthood across more than 15,000 people. The authors claim that people with low intelligence gravitate towards right-wing views because they make them feel safe. The survey, which compared childhood intelligence with political views, is bad news for David Cameron, the Conservative Party Prime Minister but should give a lift to Labour Party leader, Ed Miliband, pictured in Question Time. 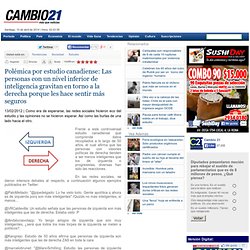 Popular psychology theories on self-esteem not backed up by serious research, study finds. Low self-esteem is associated with a greater risk of mental health problems such as eating disorders and depression. From a public health perspective, it is important for staff in various health-related professions to know about self-esteem. However, there is a vast difference between the research-based knowledge on self-esteem and the simplified popular psychology theories that are disseminated through books and motivational talks, reveals research from the University of Gothenburg. Current popular psychology books distinguish between self-esteem and self-confidence. Evolutionary Psychology. Neurobiology. Dangerous Ideas. Why Raising Children Is So Hard.

You don't really know what an experience is like, of course, until you have it yourself. 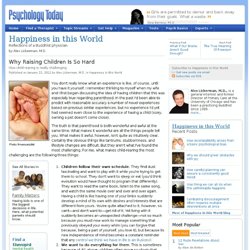 I remember thinking to myself when my wife and I first began discussing the idea of having children that this was especially true regarding parenthood . In the past I'd been able to predict with reasonable accuracy a number of novel experiences based on previous similar experiences, but no experience I'd yet had seemed even close to the experience of having a child (sorry, owning a pet doesn't come close).

The truth is that parenthood is both wonderful and awful at the same time. What makes it wonderful are all the things people tell you. What makes it awful, however, isn't quite as intuitively clear. . . . My main point here, then, is that nothing in life is only wonderful (or awful), even having children, something many tout, at least in the abstract, as the most wonderful experience to be had. Using the new Positive Psychology.