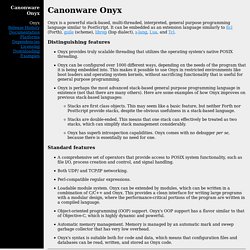 It can be embedded as an extension language similarly to ficl (Forth), guile (scheme), librep (lisp dialect), s-lang, Lua, and Tcl. Distinguishing features Onyx provides truly scalable threading that utilizes the operating system's native POSIX threading. Onyx can be configured over 1000 different ways, depending on the needs of the program that it is being embedded into. This makes it possible to use Onyx in restricted environments like boot loaders and operating system kernels, without sacrificing functionality that is useful for general purpose programming. Standard features A comprehensive set of operators that provide access to POSIX system functionality, such as file I/O, process creation and control, and signal handling. 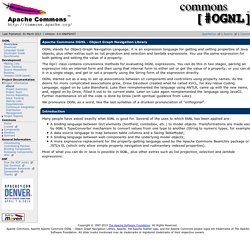 You use the same expression for both getting and setting the value of a property. The Ognl class contains convenience methods for evaluating OGNL expressions. You can do this in two stages, parsing an expression into an internal form and then using that internal form to either set or get the value of a property; or you can do it in a single stage, and get or set a property using the String form of the expression directly. OGNL started out as a way to set up associations between UI components and controllers using property names. We pronounce OGNL as a word, like the last syllables of a drunken pronunciation of "orthogonal". Introduction Many people have asked exactly what OGNL is good for. AUDACIA Software - OWBasic for PV. OWBasic for PV OWBasic implements BASIC for the Pocketviewer family from Casio. 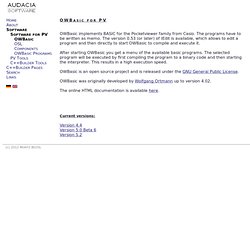 The programs have to be written as memo. The version 0.53 (or later) of IEdit is available, which allows to edit a program and then directly to start OWBasic to compile and execute it. After starting OWBasic you get a menu of the available basic programs. The selected program will be executed by first compiling the program to a binary code and then starting the interpreter. OWBasic is an open source project and is released under the GNU General Public License. OWBasic was originally developed by Wolfgang Ortmann up to version 4.02. The online HTML documentation is available here. Ooc » The ooc programming language. o42a » About. 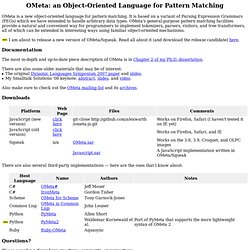 It is based on a variant of Parsing Expression Grammars (PEGs) which we have extended to handle arbitrary data types. OMeta's general-purpose pattern matching facilities provide a natural and convenient way for programmers to implement tokenizers, parsers, visitors, and tree transformers, all of which can be extended in interesting ways using familiar object-oriented mechanisms. I am about to release a new version of OMeta/Squeak. Read all about it (and download the release candidate) here. Documentation The most in-depth and up-to-date piece description of OMeta is in Chapter 2 of my Ph.D. dissertation. There are also some older materials that may be of interest: The original Dynamic Languages Symposium 2007 paper and slides.

Downloads There are also several third-party implementations — here are the ones that I know about: Questions? Please e-mail me if you have questions, comments, or suggestions. OVAL - Open Vulnerability and Assessment Language. RemObjects Software. Open64: Home. OxygenScheme - Browse Files. OptimJ: A Java-based modeling language - OptimJ - Ateji. Up to 50% productivy gains compared to traditional stand-alone modeling languages. 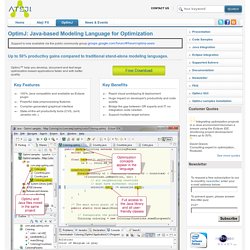 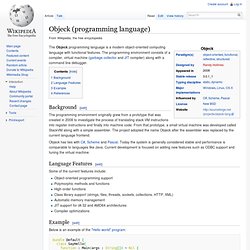 From that prototype, a small virtual machine was developed called StackVM along with a simple assembler. The project adopted the name Objeck after the assembler was replaced by the current language frontend. Some of the current features include: Ooc. Obol. Welcome to josvisser.(nl. Serbo-croatian version of this page here. OpenComal is a highly portable and free implementation of the Comal programming language written by moi. Currently supported platforms are Unix, MsDos and Win32 (95, 98, NT, 2000, XP and whatever they come up with next :-) Comal is a crossover between Basic and Pascal, with the best features of both and none of the drawbacks of either. Look at this sample program. This program takes a number and writes out the correct pronounciation in Dutch (handy uh? Fri Mar 24 08:33:37 CET 2006 date There is a new MacOS X version of OpenComal. Onyx. Obix programming language: reliable code and software developer productivity. o42a Programming Language.