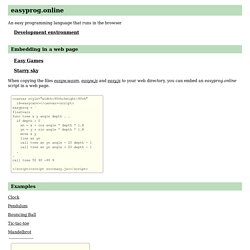 Evolve. Evolve is FREE to download and use interpreted programming language, it has been designed to be easy to use so anyone can quickly learn how to write a PC program. 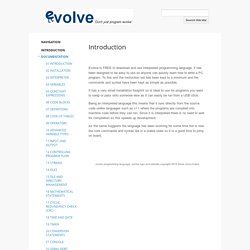 To this end the instruction set has been kept to a minimum and the commands and syntax have been kept as simple as possible. It has a very small installation footprint so is ideal to use for programs you want to swap or pass onto someone else as it can easily be run from a USB stick. Being an interpreted language this means that it runs directly from the source code unlike languages such as c++ where the programs are complied into machine code before they can run. The Egison Programming Language. Runhello / emily. This last year I've been working on a programming language. 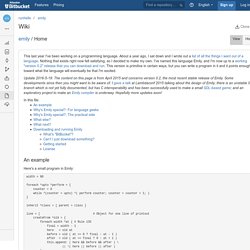 About a year ago, I sat down and I wrote out a list of all the things I want out of a language. Nothing that exists right now felt satisfying, so I decided to make my own. Earl Grey. The EQ Programming Language. The EQ Programming Language. Eve. Enfield: a programming language designed for pedagogy. Enfield: a programming language designed for pedagogy Today I would like to introduce an idea that I’ve been playing around with as a thought experiment for years, but that has finally become a reality. 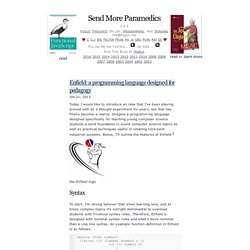 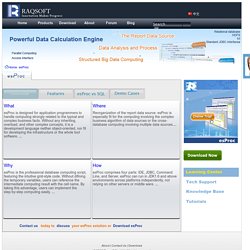 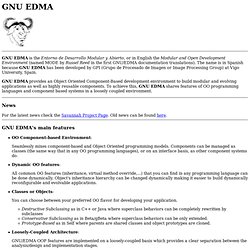 The name is in Spanish because GNU EDMA has been developed by GPI (Grupo de Procesado de Imagen or Image Processing Group) at Vigo University, Spain. GNU EDMA provides an Object Oriented Component-Based development environment to build modular and evolving applications as well as highly reusable components. To achieve this, GNU EDMA shares features of OO programming languages and component based systems in a loosely coupled environment. 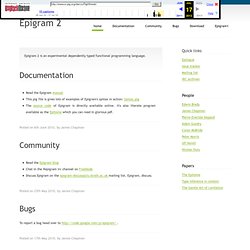 When it is it will be on hackage. Until then, and if you're feeling brave, you can download the development version from our darcs repository. You will need ghc 6.12 right now and you'll also need cabal install. We're sorry about this and we hope to target 6.10 in future. Before you start. Eureka Programming Language.

Ether: Home. The Elm Programming Language. EasyLang - The most user-friendly programming language. Myecere - eC Programming Language （eC编程） The Eve Virtual Machine. Evlan: Home. ElastiC World. Jim Lawless' Spotlight on ENVY. Euphoria v4.0. The ETA Project. Designed by Mike Taylor, beginning Tuesday 24th August 1999 Copyright © Mike Taylor, 1999. This document may be freely redistributed provided it is not modified in any way. Specifically, the authorship must remain clear. All feedback is extremely welcome, and should be emailed to the author at mike@miketaylor.org.uk. Echarts.org - Home. Elaya. 26-sep-2004 New siteSite has new layout and the backend is changed (a lot). 21-Sep-2004 StatusIt is more than a year since mine last release.

Next release is in one month I think. I'am not adding any features anymore, no big changes. Egg. In Dijkstra's book "A Discipline of Computer Programming" an anonymous computer language is described. Egg is an interpreter for this language, written in Java using the SableCC package. The name Egg has no significance!

Since choosing that name I have found this entry in the language list: EJS and EGachine home-page. Execline. Softwareskarnet.org What is it ? Execline is a (non-interactive) scripting language, like sh ; but its syntax is quite different from a traditional shell syntax. The execlineb program is meant to be used as an interpreter for a text file; the other commands are essentially useful inside an execlineb script. execline is as powerful as a shell: it features conditional loops, getopt-style option handling, filename globbing, and more. Meanwhile, its syntax is far more logic and predictable than the shell's syntax, and has no security issues.

Reference. Emu - Browse Files. About EP. What is Empowered Programmer (EP from now on) ? It is an attempt to distill out the essence of what's needed to create a Windows program. EP's deepest purpose in life is simple and direct. This is to create Win32 executables at a basic level ie. close to the machine and OS, and at the same time in an easy way. Ember. Free Development software downloads.

eTcl - Install-free Tcl engine. Version 1.0.1 - © 2001-2009 Evolane Previous releases are available from our download area . However, since each distribution comes with a lot of different media (ZIP, tar, installer, ...), and because of the large number of supported platforms, each release takes approximatively 150MB of storage. Due to limited available storage on our server, some previous beta releases will remain available only as ZIP archives. Desktop distributions (Win32, Linux-x86 and MacOSX) are available only in full featured version.

For Windows Mobile, cabinet files and win32 installer contain the standard version. Here is a small collection of 3rd parties applications, packaged as architecture independant eTcl kits. ETcl is a Tcl/Tk distribution as a single standalone executable, with support for many different architectures (Linux, Microsoft Windows, Windows Mobile 2003 or better, ...). Www.blubbedev.net/ecx/ PortablE. Wouter's Wiki : Amiga E. Amiga E is a programming language and compiler I started creating for the Amiga in '91, released publicly in '93, and released as open source in '97. It was most similar to C++, in the sense that it was fast and weakly typed, and had a rich set of features from procedural, object oriented and functional programming languages. I wrote the entire thing in assembly language, which will always persist in my mind as the craziest software engineering exercise I have ever gone through (400kb of mostly uncommented assembly in a single source file, for a complex compiler).

The original description I gave to it: ElastiC World. 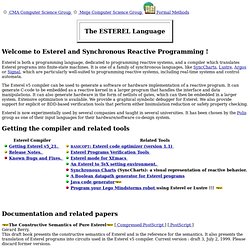 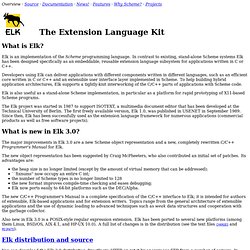 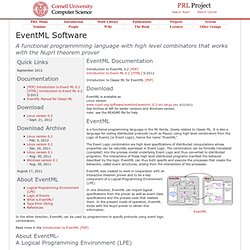