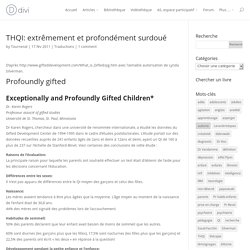 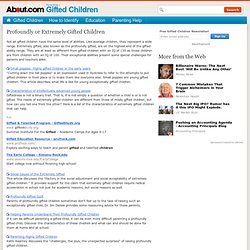 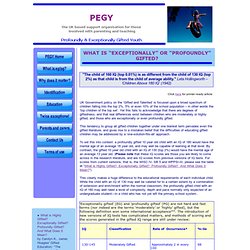 " Leta Hollingworth – ‘Children Above 180 IQ’ (1942) UK Government policy on the ‘Gifted and Talented’ is focused upon a broad spectrum of children falling into the top 2%, 5% or even 10% of the school population – in other words the ‘top children of the top set’. Yet this fails to acknowledge that there are degrees of giftedness, and that real differences exist between children who are moderately or highly gifted, and those who are exceptionally or even profoundly gifted. This tendency to group all gifted children together under one blanket term pervades even the gifted literature, and gives rise to a mistaken belief that the difficulties of educating gifted children may be addressed by a ‘one-solution-fits-all’ approach. The Outsiders – A defination extremely high IQ above 170 apply to themselves. Â©By Grady M. 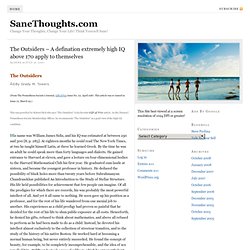 Towers (From The Prometheus Society’s Journal, Gift of Fire Issue No. 22, April 1987. This article was re-issued in Issue 72, March 95.) This was provided by Robert Dick who says “The Outsiders” is his favorite Gift of Fire article. As the [former] Prometheus Society Membership Officer, he recommends “The Outsiders” as a good view of the high-IQ condition. His name was William James Sidis, and his IQ was estimated at between 250 and 300 [8, p. 283]. For the price Newton had to pay for being a supreme intellect was that he was incapable of friendship, love, fatherhood, and many other desirable things. There was a time when all precocious children were thought to burn out the same way that Sidis did. Nevertheless, in his rush to dispel the erroneous beliefs about the gifted, Terman sometimes made claims not supported by his own data. Terman’s longitudinal research on the gifted included a constant assessment of mental health and social adjustment. 1.

What is Highly Gifted? Exceptionally Gifted? Profoundly Gifted? Given the much lower scores resulting from the newest generation of tests (WISC-IV, SB-5 and WJ-III cognitive), professionals who work with the gifted are suggesting a new set of scores and descriptive levels of giftedness, beginning at 120 to 125 for "moderately" gifted, and progressing to 142 to 145+ for "profoundly" gifted. 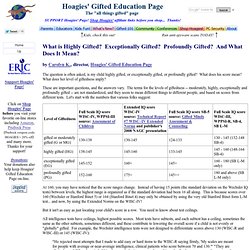 But these levels are still under investigation. How do you know if your child "hit the ceiling? " It depends on the test, and some additional information from the tester. Here are the questions to ask... If the child had continued getting questions right could he have scored any higher, or did he reach the highest score for his age on this subtest (usually a 19 on WISC / SB-5, but sometimes lower)? There are also achievement tests, which offer a standard score, that is a score based on a mean of 100, and a standard deviation of some number, commonly 15 or 16, to match the Wechsler or Stanford Binet, respectively.

A follow-up of subjects scoring above 180 IQ in Terman's genetic studies of genius. Feldman, D. 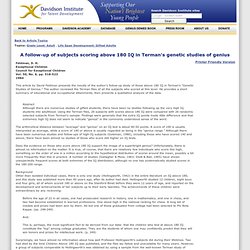 H. Exceptional Children Council for Exceptional Children Vol. 50, No. 6, pp. 518-523 1984 This article by David Feldman presents the results of the author's follow-up study of those above 180 IQ in Terman's "Genetic Studies of Genius. " The author reviewed the Terman files of all the subjects who scored at this level. He provides a short summary of educational and occupational attainments, then presents a qualitative analysis of the data. Abstract Although there are numerous studies of gifted students, there have been no studies following up the very high IQ students into adulthood. The arithmetical distance between "average" and "genius" on an IQ test is about 40-50 points.

Does the evidence on those who score above 180 IQ support the image of a superbright genius? Before the age of 22 in all cases, one had prosecuted research in history, one in mathematics, and one in chess, and two had become established in learned professions. Tips for Parents: Helping Parents Understand their Profoundly Gifted Children. Clark, B. 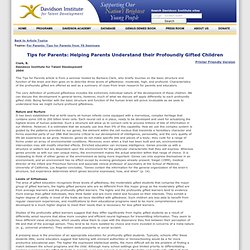 Davidson Institute for Talent Development 2004 This Tips for Parents article is from a seminar hosted by Barbara Clark, who briefly touches on the basic structure and function of the brain and then goes on to describe three levels of giftedness: moderate, high, and profound. Exceptionally and Profoundly Gifted Students: An Underserved Population. By Miraca U.M. 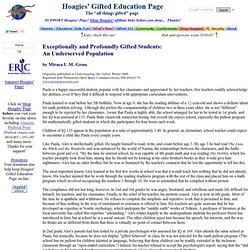 Gross Originally published in Understanding Our Gifted, Winter 2000. Reprinted with Permission, Open Space Communications, 800-494-6178. Www.openspacecomm.com Paula is a happy successful student, popular with her classmates and appreciated by her teachers. Paula learned to read before her 5th birthday.