It is my opinion that Sandy Hook was not a hoax, but there are so many discrepancies that I am not 100% sure that it was not a hoax. This is only a compilation of pages of signficance.

Shooting at Sandy Hook Elementary SChool in Newtown, Connecticut. [Rosen] went in his garage to feed the cats and when he came out he saw six children sitting in a circle on his front lawn. 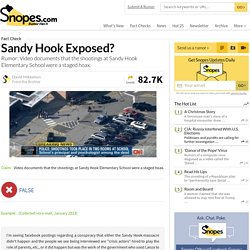 The six first-graders somehow had escaped from Sandy Hook Elementary School as a gunman shot and killed students and six educators. They ran down Dickinson Drive and around the corner to Rosen's house on Riverside Road — less than half a mile away. They had just seen their teacher die. Rosen invited the children and a bus driver who was with them into the safety of his home. Two of the boys sat on a rug in front of the couch, Rosen said, and suddenly they began to talk.

"One boy started saying loudly, 'We can't go back to the school, we can't go back to the school, our teacher is gone. is gone.'" The other boy joined in, "He had a little gun," Rosen recalled the boy saying, "and a big gun. " A girl also began talking. FBI Admits Sandy Hook Hoax? Claim: The FBI has revealed that no murders occurred in Newtown, Connecticut in 2012, inadvertently admitting that the Sandy Hook massacre was an elaborate hoax. 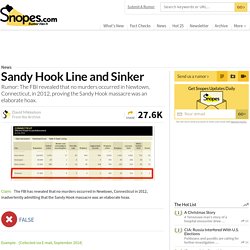 Example:[Collected via E-mail, September 2014] Saw an FBI report for Connecticut for 2012 that listed no murders in Newtown, Connecticut. 16 Unanswered Questions in Sandy Hook Shooting. Wolfgang Halbig is a former teacher, school principal, US Customs Agent and retired Florida State Trooper. 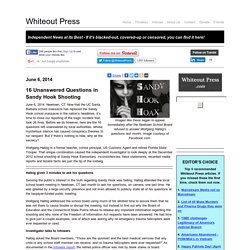 That unique combination caused the independent investigator to look deeply at the December 2012 school shooting at Sandy Hook Elementary. Inconsistencies, false statements, recanted media reports and bizarre facts are just the tip of the iceberg. Halbig given 3 minutes to ask his questions Sensing the public’s interest in the truth regarding Sandy Hook was fading, Halbig attended the local school board meeting in Newtown, CT last month to ask his questions, on camera, one last time. He was greeted by a large security presence and not even allowed to publicly state all of his questions at the taxpayer-funded public meeting. Investigator talks to Infowars Halbig asked the Board members, “Those are the quickest and the best medical services that any child or any school staff member can receive, and no trauma helicopters were ever requested?”

Your comprehensive answer to every Sandy Hook conspiracy theory. While it’s often best not to engage with conspiracy theorists on their own turf, as you can probably never convince them, it’s worth setting the record straight on all the myths and phony evidence surrounding the Sandy Hook massacre. 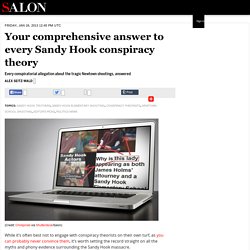 We’ve rounded up every major piece of evidence we could find that leads theorists to say the “official narrative” of events “doesn’t add up” and provided the facts that show why these questions can be easily explained. Explosion of interest in Sandy Hook anomalies polarizes, prompts nasty media backlash. The school parking lot and the black Honda allegedly driven by Adam Lanza. 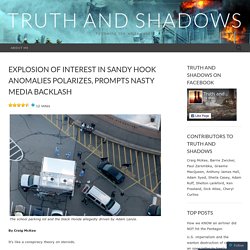 By Craig McKee It’s like a conspiracy theory on steroids. Everything about the Sandy Hook shooting is more emotional, more perplexing, and more polarizing than any single “conspiracy” event in recent memory. Questions, theories, and challenges to what we’ve been told by authorities and the media are coming up faster and more frequently than we’ve seen in just about any other similar circumstance. Confirmed facts are in short supply while emotion rules the day. Those who are usually allies in the fight for truth are finding themselves strongly disagreeing with each other over whether Sandy Hook was a false flag event or a tragedy perpetrated by one troubled young man.

There has been so much interest in the subject – and so many questions raised – that the mainstream media has had no choice but to take notice. So the question then becomes, when it comes to conspiracies, is bad publicity better than no publicity? Sandy hoodwinked: Sandy Hook 3rd Anniversary. SandyHookSchool/Wikicommons Tools For Freedom As the Sandy Hook 3rd anniversary rolls around this December 14th, 2015, it is well worth remembering what a strange, unique, manipulative and horrific event occurred on December 14th, 2012. 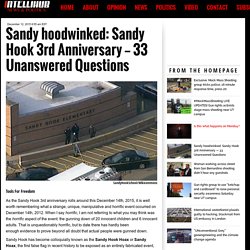 When I say horrific, I am not referring to what you may think was the horrific aspect of the event: the gunning down of 20 innocent children and 6 innocent adults. That is unquestionably horrific, but to date there has hardly been enough evidence to prove beyond all doubt that actual people were gunned down. Taking on the Sandy Hook Truthers: What Kind of Person Calls a Mass Shooting a Hoax?

Noah Pozner's sister at his grave in Newtown, Connecticut. 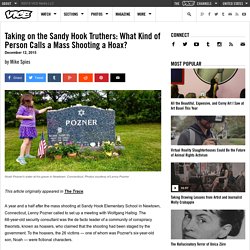 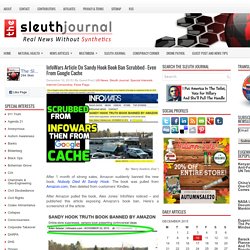 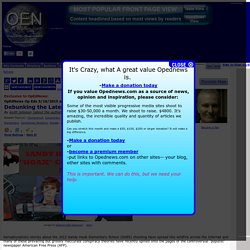 In a recent AFP article entitled, Sandy Hook: Still Looking for Answers, writer Victor Thorn makes outrageous claims about the SHES tragedy sourced from individuals that clearly don't have even a basic understanding of the events that transpired that fateful day. As a former AFP writer, it pains me to watch my erstwhile colleagues propagate this disinformation knowing just how much damage these myths and lies inflict on so many people. Last June I had an opportunity to interview Lenny Pozner, whose son Noah was the youngest child murdered at SHES. Sgt. Global Fear Decreasing As False Flags And Crisis Actors Exposed. (Before It's News) True News Network There is an old saying which states; “You can fool SOME of the people ALL of the time, and ALL of the people SOME of the time, but you can’t fool ALL of the people ALL of the time.” 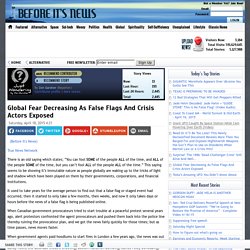 DHS Admits: We Stage Domestic Terrorism (VIDEOS) By: “Barry Soetoro, Esq” Great news: I’m not crazy. DHS just admitted it: They stage FAKE SHOOTINGS inside US shopping malls. Read that again – let it sink in. Jeh Johnson (DHS Secretary) just announced that FBI is staging FAKE Domestic Terrorism. Inside your shopping malls. The US Government is taking your money, and using it to terrorize your children. I explored fake mall shootings a couple weeks before that – and got slammed.

Sh3.pdf. Sandy Hook school shooting or government false flag operation? By Lynn Stuter January 29, 2013 NewsWithViews.com Last week I sent out an e-mail concerning the fact that the Social Security Death Index (SSDI) shows that Adam Lanza, the alleged Sandy Hook shooter, actually died on December 13, 2012, the day before Sandy Hook occurred. I outlined, step by step, how I obtained this information, so doubters could check the facts for themselves.

The SSDI record shows Adam Lanza's birth date of April 22, 1992 which has been confirmed; his birth place of Exeter, New Hampshire, has also been confirmed. The same record shows Adam Lanza's date of death as December 13, 2012. I even sent what I had found to a local news station, along with a note stating, Sandy Hook Shooting Research: Sandy Hook was not an Operating School? Map showing activity at other schools but not Sandy Hook. Was Sandy Hook Used To Bury Obama’s SSN Records? By: “Barry Soetero, Esq” | Memory Hole Blog - The real owner of Obama’s STOLEN SSN, Harrison J Bounel, was a patient at Fairfield Hills Psychiatric Hospital in Newtown Connecticut. Would access to Harrison Bounel’s Death Records prove Obama stole Bounel’s SSN? After the Sandy Hook “school shooting,” the State of Connecticut made a bizarre move.

CT locked down ALL Death Certificates — for any deaths in the entire State of CT. Governor Malloy signed three Orwellian bills into law, after they were crammed thru at 2AM, “for the children.” As a result, CT Death Certificates are NO LONGER public record — you cannot obtain them. Sandy Hook Elementary School: closed in 2008, a stage in 2012. “You can fool some of the people all of the time and all of the people some of the time, but you cannot fool all of the people all of the time”–Abraham Lincoln As Wolfgang Halbig prepares to head to Newtown to pursue the truth about Sandy Hook and confront the Newtown School Board with questions, more and more evidence suggests that Sandy Hook Elementary was not even an operating school.

Not only does information about the alleged victims of the shooting–their names, their ages and their sex–not appear in the “State Police Final Report” from Connecticut, but the “autopsy photos” that accompany the report were redacted in their entirety. Actual proof of real victims is virtually non-existent. Was Sandy Hook Used To Bury Obama’s SSN Records?