Trying Not to Try - Issue 10: Mergers & Acquisitions. In a famous story from ancient Chinese philosophy, Butcher Ding has been called upon to play his part in a traditional religious ceremony. 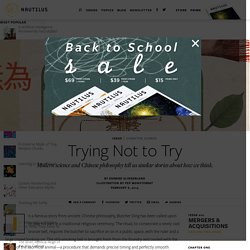 The ritual, to consecrate a newly cast bronze bell, requires the butcher to sacrifice an ox in a public space, with the ruler and a large crowd looking on. The still-smoking bell is brought fresh from the foundry and cooled with the blood of the sacrificial animal—a procedure that demands precise timing and perfectly smooth execution. Butcher Ding is up to the task, dismembering the massive animal with effortless grace: “At every touch of his hand, every bending of his shoulder, every step of his feet, every thrust of his knee—swish! Swoosh! He guided his blade along with a whoosh, and all was in perfect tune.” When I first began cutting up oxen, all I could see was the ox itself. It is not all smooth sailing. This remark signals to us that we should be taking the story of the ox as a metaphor.

Also in Cognitive Science Trying Not to Try. Three Tricks to Find Your Flow. Get award-winning advice from Dr. 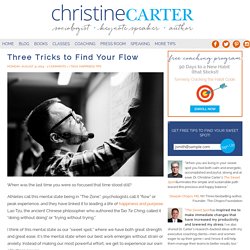 Christine Carter delivered to your inbox "Each Happiness Tip takes less than one minute to read, but they make me think, and they make me happier. I share them all with my clients. "~ Kendra Perry, Wellness Coach, Chico, CA "Fabulous advice that works. " ~ Tweet from Dr. "Christine Carter is smart, witty and real. Keep seeing this popup? When was the last time you were so focused that time stood still? All about flow by Matt Linderman of 37signals.

Mihaly Csikszentmihalyi, author of “Flow: The Psychology of Optimal Experience,” describes flow as “being completely involved in an activity for its own sake. 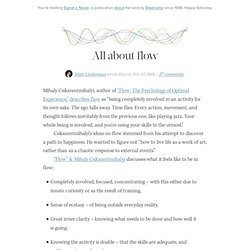 The ego falls away. Time flies. Every action, movement, and thought follows inevitably from the previous one, like playing jazz. Your whole being is involved, and you’re using your skills to the utmost.” Csikszentmihalyi’s ideas on flow stemmed from his attempt to discover a path to happiness. Mihaly Csikszentmihalyi on flow. The Rise of Superman: 17 Flow Triggers.

7 Rules for Maximizing Your Creative Output. After my last article on experiencing creativity, there was a question in the resulting forum discussion about how to enter this highly creative flow state, the state where you lose all sense of time, your ego vanishes, and you become one with the task in front of you. 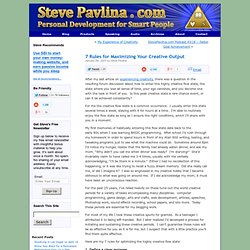 Is this peak creative state a rare chance event, or can it be achieved consistently? For me the creative flow state is a common occurrence. I usually enter this state several times a week, staying with it for hours at a time. I’m able to routinely enjoy the flow state as long as I ensure the right conditions, which I’ll share with you in a moment.

My first memories of habitually entering this flow state date back to the early 80s when I was learning BASIC programming. For most of my life I took these creative spurts for granted. Here are my 7 rules for optimizing the highly creative flow state: 1. To enter the flow state, you need a goal. Don’t overqualify your purpose. 2. 3. 4. Trying Not to Try: How to Cultivate the Paradoxical Art of Spontaneity Through the Chinese Concept of Wu-Wei. By Maria Popova “Our modern conception of human excellence is too often impoverished, cold, and bloodless. 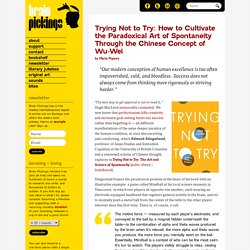 Success does not always come from thinking more rigorously or striving harder.” “The best way to get approval is not to need it,” Hugh MacLeod memorably counseled. We now know that perfectionism kills creativity and excessive goal-setting limits our success rather than begetting it — all different manifestations of the same deeper paradox of the human condition, at once disconcerting and comforting, which Edward Slingerland, professor of Asian Studies and Embodied Cognition at the University of British Columbia and a renowned scholar of Chinese thought, explores in Trying Not to Try: The Art and Science of Spontaneity (public library | IndieBound). Our lives, Slingerland argues, are often like “a massive game of Mindball,” when we find ourselves continually caught in this loop of trying so hard that we stymie our own efforts.

Art by Austin Kleon from 'Show Your Work.' Share on Tumblr. Wuwei: No Trying, No Doing. In a famous story from ancient Chinese philosophy, Butcher Ding has been called upon to play his part in a traditional religious ceremony. 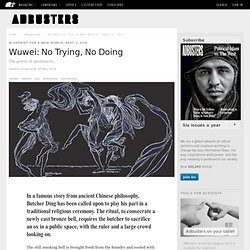 The ritual, to consecrate a newly cast bronze bell, requires the butcher to sacrifice an ox in a public space, with the ruler and a large crowd looking on. The still smoking bell is brought fresh from the foundry and cooled with the blood of the sacrificial animal — a procedure that demands precise timing and perfectly smooth execution. Get Out Of Your Way. By Peter Docker Whenever I can, I enjoy mountain or ‘fell’ running, occasionally entering a mountain marathon. 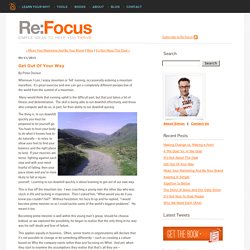 It’s great exercise and one can get a completely different perspective of the world from the summit of a mountain. Many would think that running uphill is the difficult part, but that just takes a bit of fitness and determination. The skill is being able to run downhill effectively, and those who compete well do so, in part, for their ability to run downhill quickly. The thing is, to run downhill quickly you must be prepared to let yourself go. This is true off the mountain too. Becoming prime minister is well within this young man’s grasp, should he choose. This applies equally in business. If humankind had been held back by fear and assumption, we would never have broken the sound barrier, put a man on the moon or seen the end of apartheid.