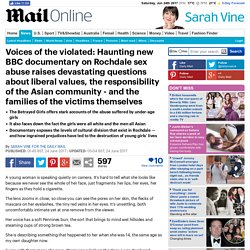 It’s hard to tell what she looks like because we never see the whole of her face, just fragments: her lips, her eyes, her fingers as they hold a cigarette. The lens zooms in close, so close you can see the pores on her skin, the flecks of mascara on her eyelashes, the tiny red veins in her eyes. It’s unsettling, both uncomfortably intimate yet at one remove from the viewer. Her voice has a soft Pennines burr, the sort that brings to mind wet hillsides and steaming cups of strong brown tea. These terrorists aren’t religious radicals – they’re criminals with psychotic aims.

We all know how the various stories ended: generally in a settlement involving concessions – either outright independence (India) or some kind of power-sharing agreement (Northern Ireland). 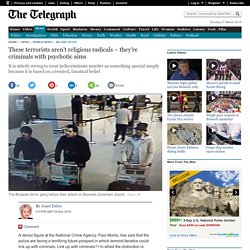 But the thing about those previous terror campaigns was precisely that they presented the possibility of bargaining and dialogue. The imperial or occupying forces understood what was being demanded and were in a position either to make offers or to remain intransigent. There was cause, in other words, for regarding the terrorism as something different from run-of-the-mill crime. How does that work in the present case? What is there to negotiate here? There can be no answer because there is no intelligible question. To say that this phenomenon is irrational does not mean that there are no sane policies, apart from ruthless policing, that might be adopted towards it. Even without a written constitution to spell it out, most free societies incorporate such an assumption in their political culture. Trojan Horse debate: We were wrong, all cultures are not equal. 'Stolen election' in the heart of London. The recount, with five other wards, took place the next day. 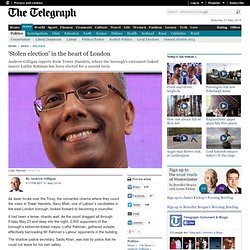 “When we went to the new count centre, we saw Lutfur talking to his candidate, saying, don’t worry, you will definitely win.” According to many witnesses, last Sunday’s count was even worse than the day before. “There were far fewer controls over who got into the building. Lutfur Rahman supporters were everywhere, leaning over the count staff, shouting at them, intimidating them, jabbing fingers,” said Peter Golds, the leader of the Conservative opposition. 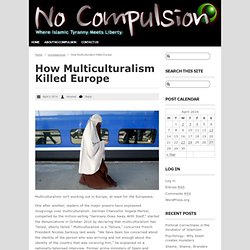 One after another, leaders of the major powers have expressed misgivings over multiculturalism. German Chancellor Angela Merkel, compelled by the million-selling “Germany Does Away With Itself,” started the denunciations in October 2010 by declaring that multiculturalism has “failed, utterly failed.” Multiculturalism is a “failure,” concurred French President Nicolas Sarkozy last week. MANZOOR MOGHAL: Veils, segregated schools and why we risk sowing the seeds of Islamic terror in Britain. By Manzoor Moghal PUBLISHED: 22:09 GMT, 23 September 2013 | UPDATED: 17:02 GMT, 22 October 2013 Islamic jihadism continues to cast its dark shadow across the world. 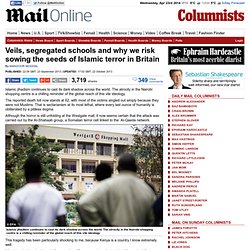 The murder of Stephen Lawrence and the strange case of the missing Wikipedia entries. Charlene Downes: missing from Wikipedia There are few people who would decry the peerage announced today for Doreen Lawrence, mother of murdered teenager Stephen Lawrence. 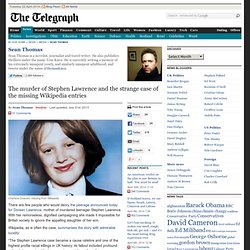 Forget 'Islamophobia'. Let's tackle Islamism. "The good news is that government is finally dealing with the issue and it is now a priority," said the government minister in a BBC film last month. And of which of the panoply of issues currently facing our country was this speaker thinking? The stalled economy? Youth unemployment? Shafilea Ahmedâs murder shows that Cameron must add some bite to his multiculturalism speech. - Mail Online - Abhijit Pandya's blog. Last week the Muslim parents of Shafilea Ahmed were found guilty of her murder. 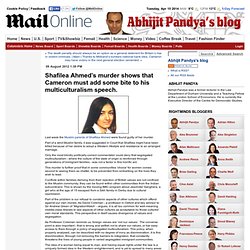 Part of a strict Muslim family, it was suggested in Court that Shafilea might have been killed because of her desire to adopt a Western lifestyle and resistance to an arranged marriage. Why the Shafilea Ahmed trial should be the final nail in the coffin of Multiculturalism. Iftikhar and Farzana Ahmed ‘A person should be free to do as he likes in his own concerns; but he ought not to be free to do as he likes in acting for another, under the pretext that the affairs of the others are his own affairs’ - John Stuart Mill ‘Some cultures are admirable, others are vile’. How calling someone a "white bitch" is not racist and being a drunken Muslim saves you from jail.

Beaten in the street, then kicked in the courtroom This week's news story about the twenty-two year old care worker beaten senseless by a drunken gang of Somalian women would have sent chills down the spine of anyone who defends the rule of law as They were spared a jail sentence after their defence lawyer claimed that as Muslims they were unused to drinking. In a society where we’ve recently railed against our representatives and corporate types for "corruption", "greed" and for appearing to believe that "the rules don’t apply to them" – we’re apparently still making excuses for our citizens based on gratuitous or farcical claims to "extenuating circumstances", especially where some of those circumstances can be fitted inside a politically correct agenda.

One instance that springs to our minds is that of Edward Woollard , the eighteen year old who hurled a fire-extinguisher from a seventh-floor window as "students" ransacked 30 Millbank Tower in London in November 2010. Got a problem?