The philosopher with no hands. Eric Olson interviewed by Richard Marshall. 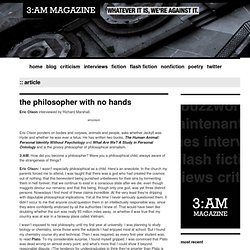 Eric Olson ponders on bodies and corpses, animals and people, asks whether Jeckyll was Hyde and whether he was ever a fetus. He has written two books, The Human Animal: Personal Identity Without Psychology and What Are We? A Study in Personal Ontology and is the groovy philosopher of philosophical animalism. 3:AM: How did you become a philosopher? Were you a philosophical child, always aware of the strangeness of things? Eric Olson: I wasn’t especially philosophical as a child. I wasn’t exposed to real philosophy until my first year at university. Self As Symbol. Emblems Of Awareness. This article is part of Demystifying the Mind, a special report on the new science of consciousness. 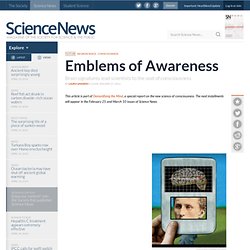 The next installments will appear in the February 25 and March 10 issues of Science News. Michael Morgenstern DEGREES OF THOUGHT | Awareness typically tracks with wakefulness — especially in normal states of consciousness (bold). People in coma or under general anesthesia score low on both measures, appearing asleep with no signs of awareness. Sometimes, wakefulness and awareness become uncoupled, such as among people in a persistent vegetative state. Consciousness Emerges. Enriched With Information. “Who’s There?” Is The Self A Convenient Fiction? For a long time people thought that the self was unified and eternal. 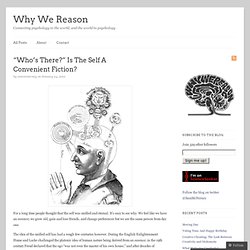 It’s easy to see why. We feel like we have an essence; we grow old, gain and lose friends, and change preferences but we are the same person from day one. The idea of the unified self has had a rough few centuries however. During the English Enlightenment Hume and Locke challenged the platonic idea of human nature being derived from an essence; in the 19th century Freud declared that the ego “was not even the master of his own house;” and after decades of revealing empirical research neuroscience has yet to reveal anything that scientists would call unified. Genetic Modification and Human Ontology. Imagine a world where human beings weren’t susceptible to diseases, where we were all strong and smart, where we couldn’t feel pain and could be put in a state of ecstasy due to things which today produce only mild excitement. 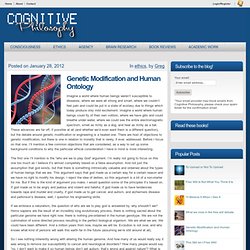 Imagine a world where human beings could fly of their own volition, where we have gills and could breathe under water, where we could see the entire electromagnetic spectrum, smell as richly as a dog, and hear as richly as a bat. These advances are far off, if possible at all (and whether we’d even want them is a different question), but the debate around genetic modification or engineering is a heated one. There are host of objections to genetic modification, but there is one in relation to morality that is rarely, if ever, addressed.

Essentialism. [BRUCE HOOD:] I've reached a crossroads in my research and in the questions I'm now starting to ask. 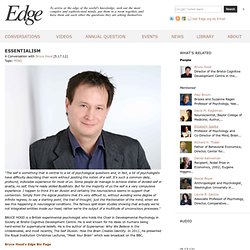 Part of that was driven by some insight and realization about the direction I was taking, and part of it was also driven by changes in economic circumstances. Notably, the reduction in funding in this country has impacted upon my field quite dramatically (behavioral sciences). The way that that has impacted is that there's far less money to fund research, so the competition to get funding has become very acute.

Now we have to justify with a view to application. In the past you could just go off on a flight of fancy studying the things that were of intrinsic interest. But now we have to steer our grant applications towards potential application, and certainly we have to write a substantial proportion of the proposal to deal with impact, public engagement. Can you be gay by choice? Choosing one’s own (sexual) identity: Shifting the terms of the ‘gay rights’ debate By Brian Earp (Follow Brian on Twitter by clicking here.) 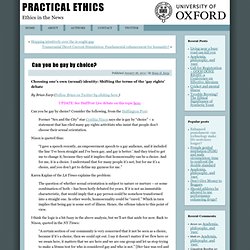 UPDATE: See HuffPost Live debate on this topic here. Can you be gay by choice? Consider the following, from the Huffington Post: Former “Sex and the City” star Cynthia Nixon says she is gay by “choice” – a statement that has riled many gay rights activitists who insist that people don’t choose their sexual orientation. Free Will Is as Real as Baseball. A handful of musings about free will have been popping up in my blog reader of late. 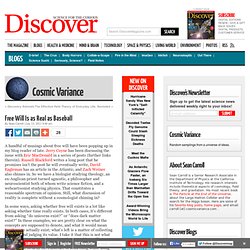 Jerry Coyne has been discussing the issue with Eric MacDonald in a series of posts (further links therein). The controversial science of free will - Neuroscience. These days, we seem to be living in a new golden age of choice. 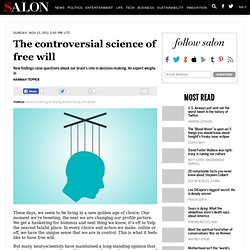 One moment we’re tweeting, the next we are changing our profile picture. We get a hankering for hummus and next thing we know, it’s off to Yelp the nearest falafel place. In every choice and action we make, online or off, we have the unique sense that we are in control. This is what it feels like to have free will. But many neuroscientists have maintained a long-standing opinion that what we experience as free will is no more than mechanistic patterns of neurons firing in the brain. Michael S.

Salon got a chance to speak with Gazzaniga over the phone about the latest findings on consciousness, our innate propensity toward fairness and why America is so obsessed with retribution. If you spent 50 years of your life trying to figure out how the brain works to produce behavior and cognition, you begin to wonder as the title suggests, “who’s in charge here?” Free Will and the Brain. Do we have free will? 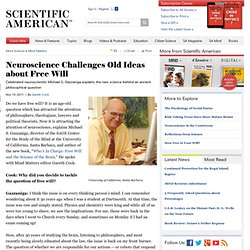 It is an age-old question which has attracted the attention of philosophers, theologians, lawyers and political theorists. Now it is attracting the attention of neuroscience, explains Michael S. Gazzaniga, director of the SAGE Center for the Study of the Mind at the University of California, Santa Barbara, and author of the new book, “Who’s In Charge: Free Will and the Science of the Brain.” He spoke with Mind Matters editor Gareth Cook. Nature, nurture and liberal values. Who's in charge – you or your brain? David Eagleman, neuroscientist at Baylor College of Medicine in Texas and bestselling author It is clear at this point that we are irrevocably tied to the 3lb of strange computational material found within our skulls. 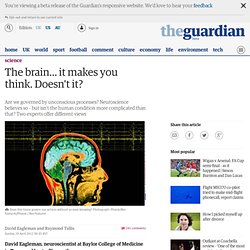 The brain is utterly alien to us, and yet our personalities, hopes, fears and aspirations all depend on the integrity of this biological tissue. How do we know this? Because when the brain changes, we change. Our personality, decision-making, risk-aversion, the capacity to see colours or name animals – all these can change, in very specific ways, when the brain is altered by tumours, strokes, drugs, disease or trauma. Column: Why you don't really have free will. Perhaps you've chosen to read this essay after scanning other articles on this website. Or, if you're in a hotel, maybe you've decided what to order for breakfast, or what clothes you'll wear today.

The debate about free will, long the purview of philosophers alone, has been given new life by scientists, especially neuroscientists studying how the brain works. Will This Post Make Sam Harris Change His Mind About Free Will? I spent this morning pondering whether I should attack neuroscientist Sam Harris for attacking free will. I thought, haven’t I spent enough time hassling Harris? I already knocked him, twice, for arguing in The Moral Landscape (Free Press, 2010) that science can help us discover moral principles as true—True with a capital T! How free is the will? Sam Harris misses his mark – Opinion – ABC Religion & Ethics.

For millenia, myth-makers, poets, philosophers, theologians, novelists and others have wrestled with a daunting question: whether, or to what extent, our lives are in our own hands (or minds). To many people, future events seem to be laid down independently of any say that we might have in the matter. This characterized the worldview of Greek mythology. Is Free Will an Illusion? IT SEEMS OBVIOUS to me that I have free will. When I have just made a decision, say, to go to a concert, I feel that I could have chosen to do something else. Yet many philosophers say this instinct is wrong. Jerry Coyne on free will. The Quantum Physics of Free Will. Beware the Fausts of Neuroscience. Theatre of dreams: The results of an fMRI scan (Wellcome Collection) "I rejoice to concur with the common reader; for by the common sense of readers, uncorrupted by scientific prejudices, after all the refinements of subtility and the dogmatism of learning, must be finally decided all claim to honours.

" Dr Johnson didn't say "scientific" (he said "literary"), and the word "poetical" came before "honours", yet his message still applies. Today there is a common reader of science. The mismeasure of neuroscience. The Zombie Within : 13.7: Cosmos And Culture. Hide captionThe inner, neural zombie exposed? Francois Guillot/AFP/Getty Images. Thus Spoke Zarathustra. Philosophy of Mind: An Overview. Brains & Minds. The Brain on Trial - Magazine. Advances in brain science are calling into question the volition behind many criminal acts.

The Mystery of Consciousness Continues by John R. Searle. Perplexities of Consciousness - By Eric Schwitzgebel - Book Review. Telling the Story of the Brain’s Cacophony of Competing Voices. A Course in Consciousness. (With last update date) Cover Foreword (August 13, 2009) Antonio Damasio: The quest to understand consciousness. Character and Its Discontents. Neuroscience vs philosophy: Taking aim at free will. Mind Reader. A Brief Guide to Embodied Cognition: Why You Are Not Your Brain. Questioning willusionism.

How Physics and Neuroscience Dictate Your "Free" Will.