How Humans Became Moral Beings. A BOOK IN PROGRESS [PART 9]: MARTIN LUTHER’S ACCIDENTAL REVOLUTION. Continuing the series of extracts from the book that I am writing on the history of moral thought, we have reached Chapter 10, which looks at the Renaissance and the Reformation and at the impact of both on moral philosophy. 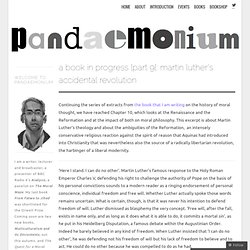 This excerpt is about Martin Luther’s theology and about the ambiguities of the Reformation, an intensely conservative religious reaction against the spirit of reason that Aquinas had introduced into Christianity that was nevertheless also the source of a radically libertarian revolution, the harbinger of a liberal modernity. ‘Here I stand. I can do no other’. Martin Luther’s famous response to the Holy Roman Emperor Charles V, defending his right to challenge the authority of Pope on the basis of his personal convictions sounds to a modern reader as a ringing endorsement of personal conscience, individual freedom and free will. Whether Luther actually spoke those words remains uncertain.

A BOOK IN PROGRESS [PART 13]: NIETZSCHE, NIHILISM AND THE DEATH OF GOD. In the series of extracts from my almost-finished book on the history of moral thought, I have reached Chapter 14, which is devoted to the philosophy of Friedrich Nietzsche. 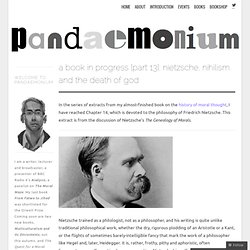 This extract is from the discussion of Nietzsche’s The Genealogy of Morals. Nietzsche trained as a philologist, not as a philosopher, and his writing is quite unlike traditional philosophical work, whether the dry, rigorous plodding of an Aristotle or a Kant, or the flights of sometimes barely-intelligible fancy that mark the work of a philosopher like Hegel and, later, Heidegger. It is, rather, frothy, pithy and aphoristic, often fragmentary, usually poetic, always provocative. Nietzsche himself saw his work neither as philosophy nor as literature, but ‘declarations of war’. Evil, Ethics, and the Imagination: An Interview with Richard Kearney, Part I : The Other Journal. In this three-part interview, the illustrious Irish philosopher Richard Kearney explores the human experiences of evil. 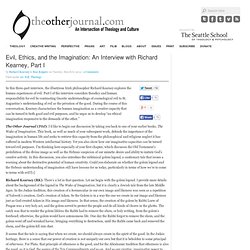 Part I of the interview considers theodicy and human responsibility for evil by contrasting Gnostic understandings of cosmological evil to St. Augustine’s understanding of evil as the privation of the good. Moral philosophy’s third way. By Massimo Pigliucci Ethics, its implications and its justifications keep appearing at Rationally Speaking in a variety of forms, from my critique of Sam Harris’ scientism to my rejection of Objectivism, from Julia’s skepticism about meta-ethics to Michael’s criticism of the non-morality of markets. 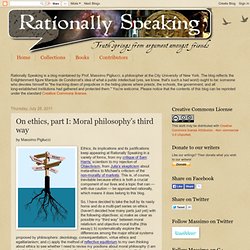 This is, of course, inevitable because ethics is both a crucial component of our lives and a topic that can — with due caution — be approached rationally, which means it does belong to this blog. The starting point for my discussion of what I will refer to as ethics’ “third way” is a recent thoughtful article published in The Stone, the New York Times’ philosophy blog. There, NYU philosopher Paul Boghossian does an excellent job at summarizing the perennial discussion between moral relativists and moral absolutists. Does moral theory create extremism?

Moral theory is what most moral philosophers spend our time doing. 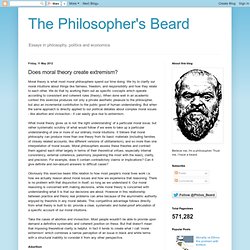 We try to clarify our moral intuitions about things like fairness, freedom, and responsibility and how they relate to each other. We do that by working them out as specific concepts which operate according to consistent and coherent rules (theory). Contractarianism. Virtue ethics. By Massimo Pigliucci [This post is part of an ongoing series on ethics in which Massimo is exploring and trying to clarify his own ideas about what is right and wrong, and why he thinks so. 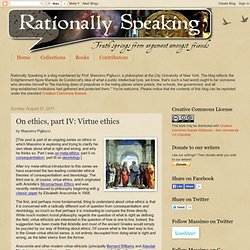 Part I was on meta-ethics; part II on consequentialism; part III on deontology.] After my meta-ethical introduction to this series we have examined the two leading contender ethical theories of consequentialism and deontology. Deontology. By Massimo Pigliucci [This post is part of an ongoing series on ethics in which Massimo is exploring and trying to clarify his own ideas about what is right and wrong, and why he thinks so. 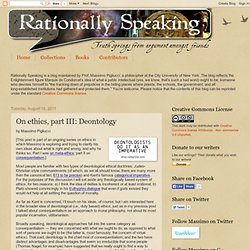 Part I was on meta-ethics; part II on consequentialism.] Most people are familiar with two types of deontological ethical doctrines: Judeo-Christian style commandments (of which, as we all should know, there are many more than the canonical ten, 613 to be precise) and Kant’s famous categorical imperative. For the purposes of this discussion I will set aside any theologically based system of ethics, for two reasons: a) I think the idea of deities is incoherent or at least irrational; b) Plato showed convincingly in his Euthyphro dialogue that even if gods existed they would not help at all settling the question of morality.

Before we get into more details, we also need to appreciate the difference between two major “modes” of deontology: agent-centered and victim-centered. Next: virtue ethics. Consequentialism. By Massimo Pigliucci. 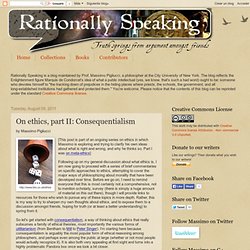 Morality vs Ethics: The Trolley Problem. "Aha" says the Moral Philosopher triumphantly, polishing his monocle ferociously with a large handkerchief. 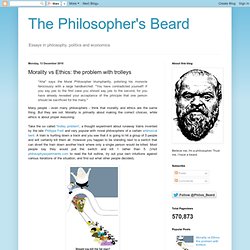 "You have contradicted yourself! If you say yes to the first case you should say yes to the second, for you have already revealed your acceptance of the principle that one person should be sacrificed for the many. " Many people - even many philosophers - think that morality and ethics are the same thing. But they are not. Morality is primarily about making the correct choices, while ethics is about proper reasoning. Take the so called 'trolley problem', a thought experiment about runaway trains invented by the late Philippa Foot and very popular with moral philosophers of a certain whimsical bent. But if the terms of the situation are slightly changed people tend to give quite a different answer. The Life You Can Save. “We Are Moving in a More Humanitarian Direction”: An Interview with Philosopher Peter Singer (Full Text and Video) Peter Singer is perhaps the world’s most influential philosopher and the Ira W. 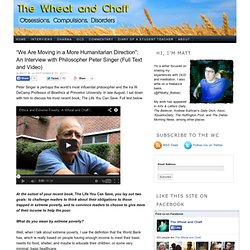 DeCamp Professor of Bioethics at Princeton University. In late August, I sat down with him to discuss his most recent book, The Life You Can Save. Full text below. At the outset of your recent book, The Life You Can Save, you lay out two goals: to challenge readers to think about their obligations to those trapped in extreme poverty, and to convince readers to choose to give more of their income to help the poor. What do you mean by extreme poverty? Well, when I talk about extreme poverty, I use the definition that the World Bank has, which is really based on people having enough income to meet their basic needs for food, shelter, and maybe to educate their children, or some very minimal, basic healthcare.

The World Bank has calculated that in order to do that, you need to have the purchasing power equivalent in your local currency of US $1.25. Should We Ban Cigarettes? - Peter Singer. Exit from comment view mode. Click to hide this space PRINCETON – US President Barack Obama’s doctor confirmed last month that the president no longer smokes. At the urging of his wife, Michelle Obama, the president first resolved to stop smoking in 2006, and has used nicotine replacement therapy to help him. The Ethics of Voting : the art of theory – a quarterly journal of political philosophy. I. Good Intentions Aren’t Enough Betty Benevolence wants to save the world. Yet she has crazy ideas about how to do it. Economics for ethics. Ethics and economics have a troubled relationship. The public is generally under the impression that ethics is about being nice or fair to other people, while economics is about the machinery of translating individual selfishness into general wealth.

One should not ask what each can say to the other, but which one we should choose. Strangely enough this is also approximately how most ethicists and economists think about the relation between their disciplines, as a result of a tacit agreement to perpetuate mutual ignorance and antipathy. Ethicists think economists are clumsy buffoons with an impoverished view of human nature and morality, obsessed with incentives and markets as the answer to everything. What Money Can't Buy: The Moral Limits of Markets. Can anything be bought and sold? Are there no limits to what is for sale? We are familiar with the fact that if you have money you can get to the head of almost any line, whether at the airport or the doctor's office.

Some people sell advertising space on their foreheads, some sell the use of their wombs for other people's pregnancies, some their kidneys. In Michael Sandel's resonant phrase, what once were market economies have become market societies. Ethics and Global Climate Change. The global climate change debate has a lopsided empirical basis - in the economy of nature but not political economy - and this has contributed to a peculiar moralising trajectory. 'Out of Character': The Good and Evil in All of Us - Maria Popova - Life. Two psychologists argue that everyone's mind contains a liar, a cheat, and a sinner. But there is always a saint, too. Moral hypocrisy, and how to avoid it. Confessions of an Ex-Moralist. A Convenient Untruth: God and the Evolution of Ethics – Opinion – ABC Religion & Ethics. Ethics is a human invention. It sprung not from the will of a divine commander, nor coalesced from pure reason, but was a cultural technology concocted by our distant ancestors to solve the problems inherent in social living.

Anthropology, Moral Optimism, and Capitalism: A Four-Field Manifesto. Christine Overall’s Why Have Children?, reviewed. Dennis Yang via Flickr Creative Commons Attribution 2.0 Generic My wife and I have twins, a boy and a girl, born with much assistance from reproductive technology. "Are Humans Getting Better?" by Peter Singer. Exit from comment view mode. Does Mars Have Rights? Does Mars have rights? Animals don’t have morality, people do. Animal Rights and the Predation Problem « The Thrifty Philosopher. The latest issue of the Journal for Applied Philosophy contains an excellent article by Ebert and Machan on what’s known as ‘the predation problem’. To summarise; the predation problem is supposed to demonstrate, via reductio ad absurdum, that animals cannot have rights because, if they did, moral agents would be required to defend animals against other animals.

Robot ethics: Morals and the machine. Peas and quiet. Does Altruism Actually Exist? - Alice G. Walton - Life. Why we have moral rules but don't follow them - science-in-society - 16 February 2012. Recovering Adam Smith's ethical economics. Reading Jane Austen as a moral philosopher. Is Incest Wrong? "Weigh More, Pay More" by Peter Singer. The Benevolent Deception: When Should a Doctor Lie to Patients? - Marc E. Agronin - Life. The Passion of Mike Daisey: Journalism, Storytelling and the Ethics of Attention. Who matters (or should) when scientists engage in ethical decision-making?