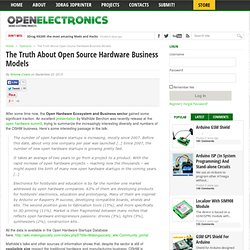 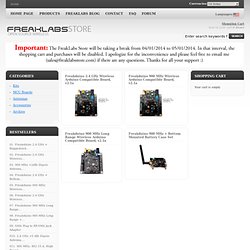 How to Start Making Your Own Electronics with Arduino and Other People's Code. Bookshare.biz. Open source electronic projects. Supermechanical: Twine. Listen to your world. Talk to the web. How to Choose the Right Platform: Raspberry Pi or BeagleBone Black. This article was originally posted at Michael Leonard’s blog and has been re-posted here. 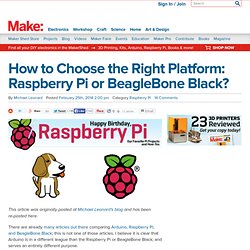 There are already many articles out there comparing Arduino, Raspberry Pi, and BeagleBone Black; this is not one of those articles. I believe it is clear that Arduino is in a different league than the Raspberry Pi or BeagleBone Black, and serves an entirely different purpose. Wi-Fi for Everything. Parallella. iFixit: The free repair manual. About MAKE. Whether your project travels in a suitcase or requires a tow hitch and trailer to move it around, get on the Road to Maker Faire Challenge — you could win $2,500 to bring your project to New York City this September for World Maker Faire! 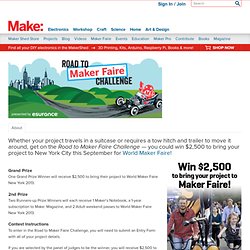 Grand PrizeOne Grand Prize Winner will receive $2,500 to bring their project to World Maker Faire New York 2013. 2nd PrizeTwo Runners-up Prize Winners will each receive 1 Maker’s Notebook, a 1-year subscription to Make: Magazine, and 2 Adult weekend passes to World Maker Faire New York 2013. Contest InstructionsTo enter in the Road to Maker Faire Challenge, you will need to submit an Entry Form with all of your project details.

If you are selected by the panel of judges to be the winner, you will receive $2,500 to bring your project to World Maker Faire New York 2013, September 21st & 22nd. Provide photos and additional documentation (such as video, blog, schematics). Contest StartsJune 25, 2013 @ 12:01am (PT) Contest EndsAugust 5, 2013 @ 11:59pm (PT) Online Electronic Resources and Support Homepage. 18 Lessons in Smart Prototyping From a Self-Made Billionaire - Make: Dan Gelbart made a fortune in R&D for his company Creo. 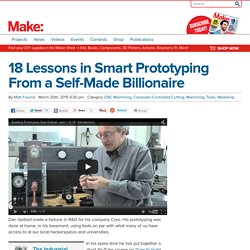 His prototyping was done at home, in his basement, using tools on par with what many of us have access to at our local hackerspaces and universities. In his spare time he has put together a short YouTube course on “how to build stuff” for students and researchers whose primary skill sets are unrelated to fabrication. The goal being to build good things quickly with simple equipment. The course is solid gold for anyone looking to improve their shop or hackerspace on the cheap. About Adafruit - Press, Limor Fried / Ladyada & more... DIY Flexible Printed Circuits. Get some thin sheets of polyimide which have copper on one or both sides. 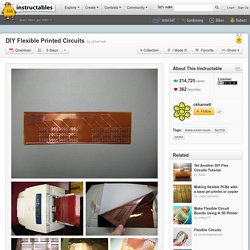 Polyimide is a yellow polymer with a high melting temperature and is sometimes called Kapton. A common type of copper-coated polyimide is DuPont "Pyralux" material. Pyralux sheets come in many different varieties of polyimide thickness, copper thickness and adhesive thickness (the "adhesive" is between the copper and polyimide holding everything together.) Copper thickness is given in oz per square foot, while adhesive and Kapton thickness is given in mil (1 mil =0.001 inch). Pyralux LF7062 (pictured) has 1/2 oz Cu, 1/2 mil adhesive and 1 mil Kapton. Other options are double sided copper ( a sandwich of Cu/Kapton/Cu held together with adhesive) and a roughened surface, denoted by R at the end of the part number.

The roughened sheets and double sided sheet work OK. See if you can get a free sample from DuPont. So long, breadboard: Draw circuits instantly with the Circuit Scribe pen. The process of learning about electronic circuits today is pretty low-tech. 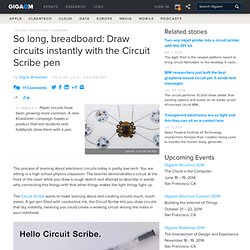 You are sitting in a high school physics classroom. The teacher demonstrates a circuit at the front of the room while you draw a rough sketch and attempt to describe in words why connecting this thingy with that other thingy makes the light thingy light up. List of free and open source software packages. Find Open Source Alternatives to commercial software. Apple Just Ended the Era of Paid Operating Systems. Craig Federighi announces pricing on OS X Mavericks earlier today. 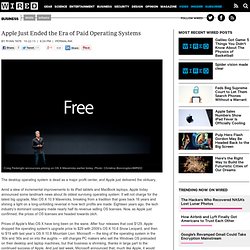 Photo: Christina Bonnington/WIRED The desktop operating system is dead as a major profit center, and Apple just delivered the obituary. Amid a slew of incremental improvements to its iPad tablets and MacBook laptops, Apple today announced some landmark news about its oldest surviving operating system: It will not charge for the latest big upgrade, Mac OS X 10.9 Mavericks, breaking from a tradition that goes back 16 years and shining a light on a long-unfolding reversal in how tech profits are made.

Eighteen years ago, the tech industry’s dominant company made nearly half its revenue selling OS licenses. Now, as Apple just confirmed, the prices of OS licenses are headed towards zilch. Prices of Apple’s Mac OS X have long been on the wane. As the mobile world takes off, it’s only natural that the desktop and laptop world would move towards the free model as well.