The Toxoplasma Of Rage. “Nobody makes an IRC channel for no reason. 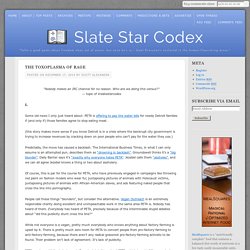 Who are we doing this versus?” — topic of #slatestarcodex. Why it’s time to rethink visual storytelling on the web from the bottom up. We've already seen this approach fail in online video news, where papers rushed to produce their own news bulletins with a newsreader (huh?) 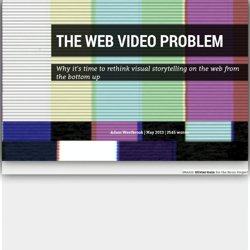 And television style packages, completely forgetting they were formats made for TV. The results were embarrassing . (Incidentally, this also works (or doesn't work) the other way. Ever seen Great Movie Mistakes? Upworthy: I Thought This Website Was Crazy, but What Happened Next Changed Everything - Derek Thompson. The Internet's latest viral wizard matches smart technology and lily-white earnestness to market "stuff that matters" online, and the Gates Foundation is buying. 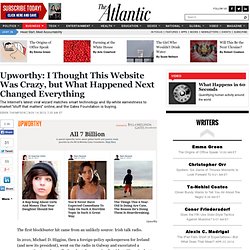 The first blockbuster hit came from an unlikely source: Irish talk radio. In 2010, Michael D. Higgins, then a foreign-policy spokesperson for Ireland (and now its president), went on the radio in Galway and excoriated a conservative American talk show host for opposing President Obama's plan to enact universal health care. For Archivists, ‘Occupy’ Movement Presents New Challenges - Wired Campus. Baltimore – Howard Besser, a New York University archivist, recently got into a shouting match at an Occupy protest, making a case for why the activists should preserve records of their activities. 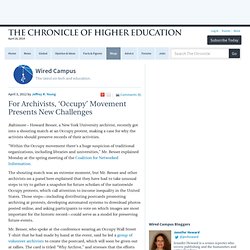 “Within the Occupy movement there’s a huge suspicion of traditional organizations, including libraries and universities,” Mr. Besser explained Monday at the spring meeting of the Coalition for Networked Information. The shouting match was an extreme moment, but Mr. Besser and other archivists on a panel here explained that they have had to take unusual steps to try to gather a snapshot for future scholars of the nationwide Occupy protests, which call attention to income inequality in the United States. Those steps—including distributing postcards promoting archiving at protests, developing automated systems to download photos posted online, and asking participants to vote on which images are most important for the historic record—could serve as a model for preserving future events. 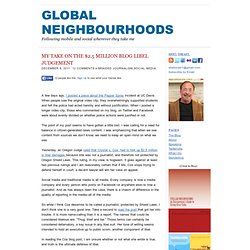 When people saw the original video clip, they overwhelmingly supported students and felt the police had acted harshly and without justification. When I posted a longer video clip, those who commented on my blog, on Twitter and Facebook were about evenly divided on whether police actions were justified or not. 7 Citizen Journalism Websites For Crowdsourced News. Citizen journalism in the simple sense is news collected and published online by people like you and me. 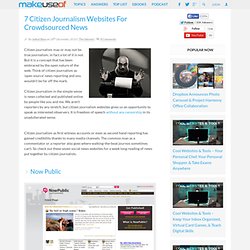 We aren’t reporters by any stretch, but citizen journalism websites gives us an opportunity to speak as interested observers. It is freedom of speech without any censorship in its unadulterated sense. Citizen journalism as first witness accounts or even as second hand reporting has gained credibility thanks to many media channels. The common man as a commentator or a reporter also goes where walking-the-beat journos sometimes can’t. So check out these seven social news websites for a week long reading of news put together by citizen journalists.

Independentmedia.ca: a directory of non-corporate journalism. Occupy. A Catalogue of Social Media (and Related) Tools. Global directory of #occupy live video streams. Globalrevolution. RSA Animate - The Internet in Society: Empowering or Censoring Citizens? Social Movements in the Age of the Internet. Twitter, Facebook, and social activism. Liking Social Justice - Politics. The whole Kony 2012 debate has gotten me thinking about how activism has changed over the past few years, especially with the explosion of social media use. 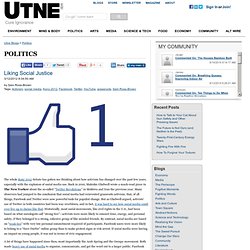 Back in 2010, Malcolm Gladwell wrote a much-read piece in The New Yorker about the so-called “Twitter Revolutions” in Moldova and Iran the previous year. Many observers had jumped to the conclusion that social media had reinvented grassroots activism, that, of all things, Facebook and Twitter were now powerful tools for populist change. UNICEF says Facebook 'likes' won't save children's lives.

UNICEF has launched a bold advertising campaign that takes direct aim at perhaps the most ubiquitous form of online activism — the Facebook "like. 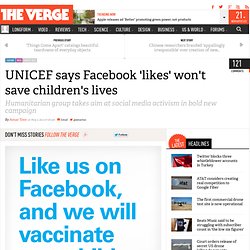 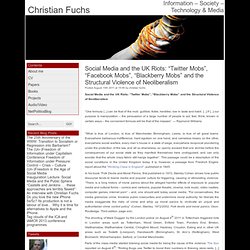 Clicktivism is ruining leftist activism. A battle is raging for the soul of activism. 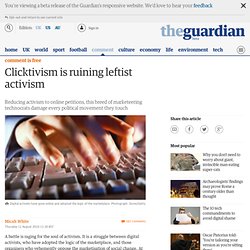 It is a struggle between digital activists, who have adopted the logic of the marketplace, and those organisers who vehemently oppose the marketisation of social change. At stake is the possibility of an emancipatory revolution in our lifetimes. The conflict can be traced back to 1997 when a quirky Berkeley, California-based software company known for its iconic flying toaster screensaver was purchased for $13.8m (£8.8m). The sale financially liberated the founders, a left-leaning husband-and-wife team. He was a computer programmer, she a vice-president of marketing. Maybe you’re better off not holding hands and singing We Shall Overcome.

By Francesca Polletta Jennifer Earl and Katrina Kimport wade into the debate over the role of the Internet in contemporary social movements with a provocative claim: the Internet is ushering in a new repertoire of protest. In this repertoire, mobilizations are sporadic rather than deep-rooted and enduring. MoveOn.Org.

Anonymous: From the Lulz to Collective Action. Anonymous 101: Introduction to the Lulz. (Editor’s Note: Any decent coverage of Anonymous is going to verge on some NSFW material at points. There will be questionable language and strange imagery.) Last week the net and the media were ablaze with the news that Anonymous might be taking on the Zeta drug cartel in Mexico, a story that has morphed into a wider drug corruption story, and led to one American law enforcement official in North Carolina being named as a gang conspirator. Also this year, Anons released documents on, or d0xed, several police organizations and one prominent police vendor in retaliation for heavy-handed law enforcement reaction to occupations associated with the Occupy Wall Street movement. Casually Pepper Spray Everything Cop. About Pepper Spray Cop (also known as “Casually Pepper Spray Everything Cop”) is a photoshop meme based on a photograph of a police officer offhandedly pepper spraying a group of Occupy protesters at the University of California Davis in November 2011.

Origin UC Davis Occupy Protest On November 18th, 2011, a group of students at the University of California Davis gathered on campus for an Occupy protest, during which they formed a human chain by linking their arms together. When they refused to comply with the police request to leave, UC Davis Police officer Lieutenant John Pike and another officer walked across the the group, administering orange pepper spray straight down the line of unmoving students.

A photo of Lieutenant John Pike pepper spraying seated students at the UC Davis protest was taken by Louise Macabitas and posted to Reddit on November 19th, 2011. Mr. Washington Goes to Anonymous - Alexis Madrigal - Technology. CNN: Anonymous Wants To See An All Out Revolution Here In The United States! Social Networks. New media and Web Science.