Axis mundi. The axis mundi (also cosmic axis, world axis, world pillar, center of the world, world tree), in certain beliefs and philosophies, is the world center, or the connection between Heaven and Earth. 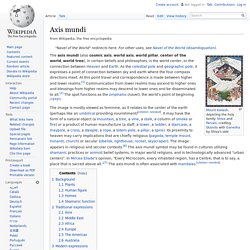 As the celestial pole and geographic pole, it expresses a point of connection between sky and earth where the four compass directions meet. At this point travel and correspondence is made between higher and lower realms.[1] Communication from lower realms may ascend to higher ones and blessings from higher realms may descend to lower ones and be disseminated to all.[2] The spot functions as the omphalos (navel), the world's point of beginning.[3][4][5]

List of death deities. Deities associated with death take many different forms, depending on the specific culture and religion being referenced. 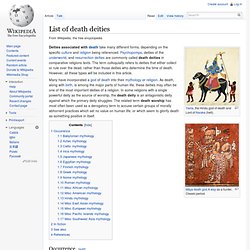 Psychopomps, deities of the underworld, and resurrection deities are commonly called death deities in comparative religions texts. The term colloquially refers to deities that either collect or rule over the dead, rather than those deities who determine the time of death. However, all these types will be included in this article. Many have incorporated a god of death into their mythology or religion. Dying-and-rising god. The methods of death can be diverse, the Norse Baldr mistakenly dies by the arrow of his blind brother, the Aztec Quetzalcoatl sets himself on fire after over-drinking, and the Japanese Izanami dies of a fever.[2][15] Some gods who die are also seen as either returning or bringing about life in some other form, in many cases associated with a vegetation deity related to a staple.[2][16] The very existence of the category "dying-and-rising-god" was debated throughout the 20th century, and the soundness of the category was widely questioned, given that many of the proposed gods did not return in a permanent sense as the same deity.[1][2][17] By the end of the 20th century, scholarly consensus had formed against the reasoning used to suggest the category, and it was generally considered inappropriate from a historical perspective.[2][18] Overview[edit] Odin whispering to a dead Baldr as he is to be sent out to sea. 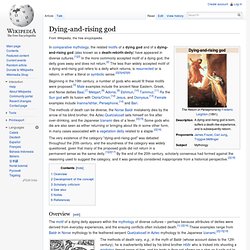 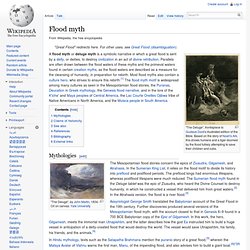 Based on the story of Noah's Ark, this shows humans and a tiger doomed by the flood futilely attempting to save their children and cubs. 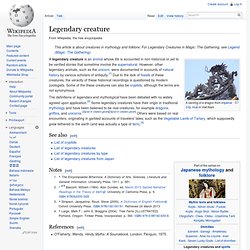 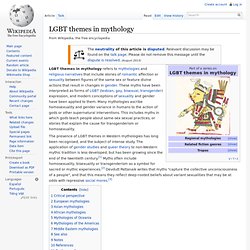 The application of gender studies and queer theory to non-Western mythic tradition is less developed, but has been growing since the end of the twentieth century.[1] Myths often include homosexuality, bisexuality or transgenderism as a symbol for sacred or mythic experiences.[2] Devdutt Pattanaik writes that myths "capture the collective unconsciousness of a people", and that this means they reflect deep-rooted beliefs about variant sexualities that may be at odds with repressive social mores.[3] Critical perspective[edit] 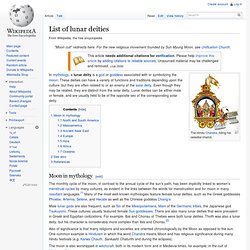 Moon in mythology[edit] Also of significance is that many religions and societies are oriented chronologically by the Moon as opposed to the sun. One common example is Hinduism in which the word Chandra means Moon and has religious significance during many Hindu festivals (e.g. Mother goddess. Mother goddess is a term used to refer to a goddess who represents and/or is a personification of nature, motherhood, fertility, creation, destruction or who embodies the bounty of the Earth. 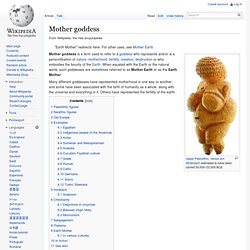 When equated with the Earth or the natural world, such goddesses are sometimes referred to as Mother Earth or as the Earth Mother. Many different goddesses have represented motherhood in one way or another, and some have been associated with the birth of humanity as a whole, along with the universe and everything in it. Others have represented the fertility of the earth. Paleolithic figures[edit] National myth. In some places, the national myth may be spiritual in tone and refer to stories of the nation's founding at the hands of God, the gods, leaders favored by gods, and other supernatural beings. 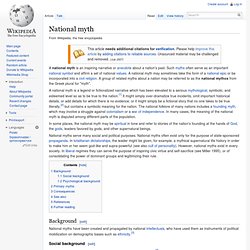 National myths serve many social and political purposes. National myths often exist only for the purpose of state-sponsored propaganda. In totalitarian dictatorships, the leader might be given, for example, a mythical supernatural life history in order to make him or her seem god-like and supra-powerful (see also cult of personality). However, national myths exist in every society. In liberal regimes they can serve the purpose of inspiring civic virtue and self-sacrifice (see Miller 1995), or of consolidating the power of dominant groups and legitimizing their rule. Origin-of-death myth. The origin of death is a theme in the myths of many cultures. 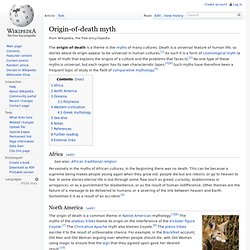 Death is a universal feature of human life, so stories about its origin appear to be universal in human cultures.[1] As such it is a form of cosmological myth (a type of myth that explains the origins of a culture and the problems that faces it).[2] No one type of these myths is universal, but each region has its own characteristic types.[3][4] Such myths have therefore been a frequent topic of study in the field of comparative mythology.[5] Africa[edit] Pervasively in the myths of African cultures, in the beginning there was no death. This can be because a supreme being makes people young again when they grow old; people die but are reborn; or go to heaven to live. In some stories eternal life is lost through some flaw (such as greed, curiosity, stubbornness or arrogance), or as a punishment for disobedience, or as the result of human indifference.

North America[edit] Psychopomp. In Jungian psychology, the psychopomp is a mediator between the unconscious and conscious realms. It is symbolically personified in dreams as a wise man or woman, or sometimes as a helpful animal. Sky father. "Sky Father" is a direct translation of the Vedic Dyaus Pita, etymologically identical to the Greek Zeus Pater.[1] While there are numerous parallels adduced from outside of Indo-European mythology, the concept is far from universal (e.g.

Egyptian mythology has a "Heavenly Mother"). "Sky Father" in historical mythology[edit] "Nomadic" hypothesis[edit] In late 19th century opinions on comparative religion, in a line of thinking that begins with Friedrich Engels and J. J. This view was stylized as reflecting not only a conflict of nomadism vs. agriculturalism but of "patriarchy" vs. Reception in modern culture[edit] The theory about earth goddesses, sky father, and patriarchal invaders was a stirring tale that fired various imaginations. Solar deity. Statue of Hathor – Luxor Museum The winged sun was an ancient (3rd millennium BC) symbol of Horus, later identified with Ra A solar deity (also sun god/dess) is a sky deity who represents the Sun, or an aspect of it, usually by its perceived power and strength.

Solar deities and sun worship can be found throughout most of recorded history in various forms. Hence, many beliefs have formed around this worship, such as the "missing sun" found in many cultures. Trickster. Mythology[edit] Loki cuts the hair of the goddess Sif. Frequently the Trickster figure exhibits gender and form variability, changing gender roles and even occasionally engaging in same-sex practices.

Such figures appear in Native American and First Nations mythologies, where they are said to have a two-spirit nature. Underworld. Yggdrasil, a modern attempt to reconstruct the Norse world tree which connects the heavens, the world, and the underworld. The legs of the god Vishnu as the Cosmic Man depict earth and the seven realms of the Hindu underworld of Patala. The feet rest on cosmic serpent Shesha. Underworlds by mythology[edit] This list includes underworlds in various mythology, with links to corresponding articles. Underworld rulers[edit] This list includes rulers or guardians of the underworld in various mythologies, with links to corresponding articles. See also[edit] List of women warriors in folklore. The Hindu goddess Kali slays the demon Raktabija in an etching by Richard B. Godfrey (1770). Mytheme. In the study of mythology, a mytheme is the essential kernel of a myth—an irreducible, unchanging element,[1] a minimal unit that is always found shared with other, related mythemes and reassembled in various ways ("bundled" was Claude Lévi-Strauss's image)[2] or linked in more complicated relationships.

For example, the myths of Adonis and Osiris share several elements, leading some scholars to conclude that they share a source, i.e. images passed down in cultures or from one to another, being ascribed new interpretations of the action depicted as well as new names in various readings of icons.