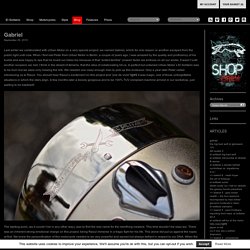 Blogs were the coolest thing that happened to communication in the early 21st century but, unfortunately, were rapidly killed by shark marketers and human stupidity. Anyhow for the chosen few that still read this lines, I feel its well deserved the effort. Glemseck 101 is a racing party that takes place in Germany. That was all I knew a few years back when I first met Jorg Litzenburger. Trying to remember, I think it was in Verona and I was imediately cautivated by his charm and avant-garde way of understanding The Motorcycle and its culture. Fair enough with the story of Glemseck 101, now lets cross it with the story of El Solitario MC. So, the date was set and guns were loaded.

There is a reiterative “funny” fact that knows no frontiers when speaking about premieres and motorcycle builders. Our little Wheels and Waves in the middle of Germany. Deus Ex MachinaDeus Ex Machina. The Distinguished Gentleman’s ride is an important date on the calendar of many classic and classic custom riders around the world, what started has an excuse to ride around Sydney in fine suits quickly became one… More. 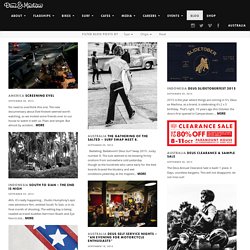 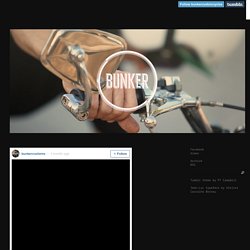 Bratstyle. Cafe Racer Genova. FMW Motorcycles. Jason Paul Michaels - Rider. Like many of us, Jason started on a tricycle. 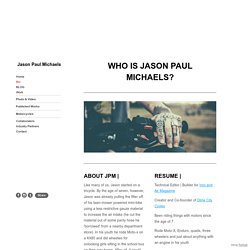 By the age of seven, however, Jason was already pulling the filter off of his lawn-mower powered mini-bike using a less restrictive gauze material to increase the air intake (he cut the material out of some panty hose he 'borrowed' from a nearby department store). In his youth he rode Moto-x on a KX80 and did wheelies for onlooking girls sitting in the school bus on their way home. After-all, it would only make sense that he rode his dirt-bike to school. Before to long he was flying across the Bonneville Salt Flats and El Mirage Dry Lake, and road racing at Barber and Little Talladega.

The common thread being the pursuit of freedom via two wheels. Never slowing down, he continued his involvement with motorcycles by creating and co-founding Dime City Cycles. It roCkS!bikes. Numbnut Motorcycles — Amsterdam. Macco Motors » Macco Motors. Translate. Bonneville Performance. Our Mikuni Carburetor Kit was specifically developed for the carburated models (2001-2008) of the modern classic Triumph Bonneville (Bonneville, Thruxton, Scrambler, America, Speedmaster) and is designed and manufactured exclusively for Bonneville Performance. 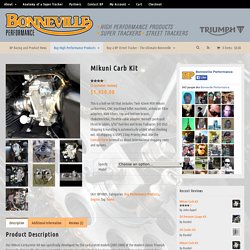 It consists of twin 42mm HSR Mikuni carburetors jetted for your bike, CNC machined billet manifolds, airbox/air filter adapters, top and bottom braces. It also includes o-rings, throttle control rod for carbs, all fasteners and throttle cables. A single pull twin cable choke (enricher) is also included. This is a bolt on kit. For best performance we recommend an aftermarket tuned exhaust system. If you are tired of erratic idle speed, sluggish response and the general unpredictable behavior of your stock Keihin CV’s, this kit is your answer for rock solid performance at low, mid and top end RPM ranges. 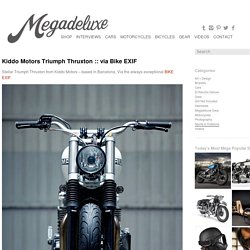 Via the always exceptional BIKE EXIF. I asked Sergio to tell me a little bit about this bike, himself, and Kiddo Motors. Hi Wes, About the bike: It’s a commissioned bike. The customer asked us for a lighter, more powerful and clean bike. About us: We just try to celebrate our passion for motorcycling. Kompo-Tech. FCR Original - Préparateur moto. Alutanks made in Germany. Keino Cycles. DEALS AND WHEELS. Bikes. Rough Crafts. Harley Davidson,Sportster,XR1200,Blackline parts. Mule Motorcycles France - Parts for Sale. "The "Fifteen Hundred" - Ducati Pantah 650 - Revival Cycles. PYRO - 2006 Ducati Sport Classic - This build has become one the team favorites. 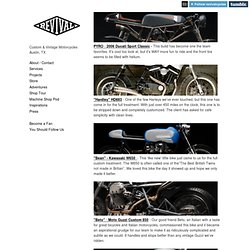 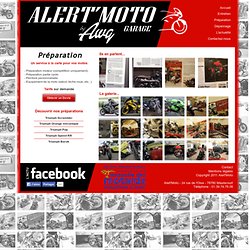