Fuck Yeah Chinese Myths! So, this was the book that I referred to when writing these four posts about the Tang dynasty. 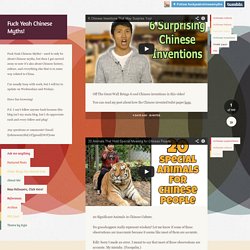 If you’re a longtime reader, you’d know that I love love love the Tang dynasty, and I really wanted to know how people lived during that period of time. Yes, that’s right, lived. I always end up writing about famous people in that era, and I wanted to know how non-royal people actually lived, and I got my answer with this book. Okay, so, like my previous review, the dude who wrote this book was not Chinese, and he is very likely of European descent, so I had to bear that in mind when reading this book. But that aside, this is actually a fun read—Benn intersperses his facts with anecdotes that are almost folkloric. (Sidenote: I mentioned this to one of my friends, and she said that the idea of history being a series of events told factually [that is, without supernatural elements] is actually a construct of the Enlightenment.

I totally recommend this book. The Wonderfully Elusive Chinese Novel by Perry Link. The Plum in the Golden Vase or, Chin P’ing Mei, Vol. 5: The Dissolution by an unknown author, translated from the Chinese by David Tod Roy Princeton University Press, 556 pp., $39.95 In teaching Chinese-language courses to American students, which I have done about thirty times, perhaps the most anguishing question I get is “Professor Link, what is the Chinese word for ______?” 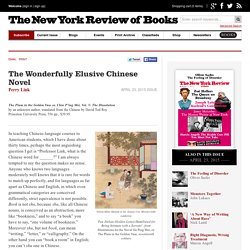 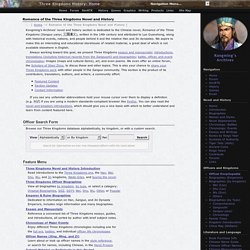 We aspire to make this an interesting and educational storehouse of related material, a great deal of which is not available elsewhere in English. Portraits of Ts'ao Ts'ao. Lienu zhuan Editorial Notes. Traditions Of Exemplary Women (Lienu zhuan): An Introduction by Anne Behnke Kinney Associate Professor of Chinese University of Virginia Compiled toward the end of the Former Han dynasty (202 B.C.- A.D. 9), Liu Xiang's (79-8 B.C.) 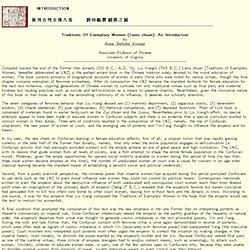 Lienu zhuan [Traditions of Exemplary Women, hereafter abbreviated as LNZ] is the earliest extant book in the Chinese tradition solely devoted to the moral education of women. An alternative Cinderella: The girl with a kneading bowl (not a pearl earring) Tracy Chevalier’s 1999 novel Girl with a pearl earring was inspired by the magnificent painting by the Dutch artist Johannes Vermeer. 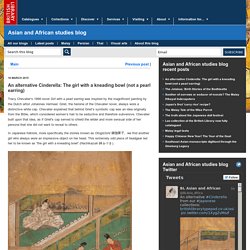 Marta Hanson View on Amazon Marta Hanson‘s book is a rich study of conceptions of space in medical thought and practice. 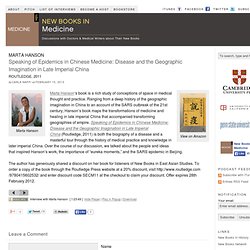 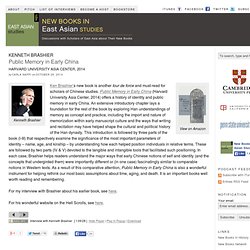 Ernest P. Young, “Ecclesiastical Colony: China’s Catholic Church and the French Religious Protectorate” (Oxford UP, 2013) Emma Teng, “Eurasian: Mixed Identities in the United States, China, and Hong Kong, 1842-1943″ (University of California Press, 2013) Propaganda and ideology in everyday life: Chinese comic books. The Chinese collection at the British Library includes an interesting series of around 100 comic books published during the 1960s in the People’s Republic of China. 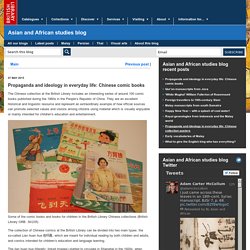 They are an excellent historical and linguistic resource and represent an extraordinary example of how official sources can promote selected values and visions among citizens using material which is visually enjoyable or mainly intended for children’s education and entertainment. Some of the comic books and books for children in the British Library Chinese collections (British Library ORB. 30/235) The collection of Chinese comics at the British Library can be divided into two main types: the so-called Lian huan hua 连环画, which are meant for individual reading by both children and adults, and comics intended for children’s education and language learning.

The themes contained in the lian huan hua differ from year to year. You can find a video trailer here and access the course registration at this page. Shengqing Wu, “Modern Archaics: Continuity and Innovation in the Chinese Lyric Tradition, 1900-1937″ (Harvard Asia Center, 2014) Shanghai Nightscapes: A Nocturnal Biography of a Global City, Farrer, Field. Jie Li, "Shanghai Homes: Palimpsests of Private Life" (Columbia UP, 2015)

China. History, Travel, Arts, Science, People, Places. History, Travel, Arts, Science, People, Places. Empire of Tea: The Asian Leaf that Conquered the World, Ellis, Coulton, Mauger. The Reverse Marco Polo. Voyages of Rabban Bar Sauma, 2007, PHGCOM In the West everyone knows the story of the Croat, Marco Polo, who traveled from Italy to the court of Kublai Khan in China in the 13th century. 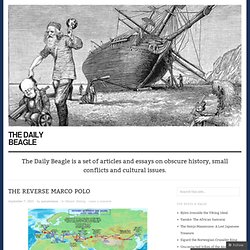 Whilst it has become a fairly common belief that Marco Polo, in fact, didn’t go to China, but instead took his stories of China from merchant sailors, his story does give us an interesting insight into 13th century China through the eyes of a Westerner (or Westerners). However, the fact that there is a reverse Marco Polo story seems to have been missed by most people. Matteo Ricci is one of the co-creaters of the first European-Chinese map. Wednesday, October 23, 2013 | By: Sophia Man (万美凤） China’s first ever introduction to the western world via maps was all due to one man, Matteo Ricci. Ricci was the first Westerner ever allowed into the Forbidden City and into the company of the Chinese Emperor. Though those were probably his finest moments, Ricci helped introduce the Western astrolabe, the sphere, and isoperimetrics to China. Matteo Ricci had brought western atlases with him when he traveled to China, so Chinese cartographers were exposed to a new view of the known world.

Ricci in turn was also enlightened by Chinese cartographers who revealed their own atlases of the world, Ricci found that they were just as complete, yet different to his own. Nan @ Tumblr. Nan @ Tumblr. Politics of Men’s Hair in Chinese history ... History of Chinese Fireworks. How the history of Chinese fireworks began The history of making fireworks began with the ancient Chinese Daoists in the Han dynasty in 202 BC. 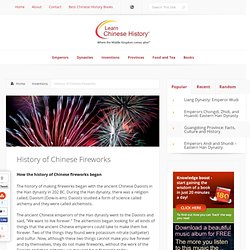 Modelled on the fashion of Western countries and imitating the ‘star-making factories’ that produced starlets and sirens became the driving force behind the Chinese entertainment industry. The result was a generation of actresses – from the traditionally demure to the modern seductress – that have become legends for both their successful careers and scandalous personal lives. Ling long Women's Magazine. French Journalist's Rediscovered Photos of 1930s Shanghai Reveal Everyday Lives of the Past. Louis-Philippe Messelier’s photographs of China in the 1930’s capture the dynamism and vitality of a nation on the cusp of great growth.

The French photographer's pieces are quickly gaining much deserved recognition after being featured on Photography of China, a media source that introduces a range of historical and contemporary photographers who focus on China. East X East. Propaganda and ideology in everyday life: Chinese collection posters. The Chinese collection at the British Library includes an interesting series of around 40 posters produced in the 1970s and 1980s in the People’s Republic of China which represent an extraordinary example of popular visual material created by official sources to promote a sense of shared history and national identity. Detail from富裕童喜, Fu yu tong xi, Wealthy and Happy Baby, author: Zhang Guiying, 1982, 77.5 x 53cm (British Library ORB. 99/104) The Chinese collection of posters from the 70s and 80s can be grouped by different subject areas and themes: New Year Prints, including the “chubby babies” series, theatre and film posters, educational posters, prints on the Mao cult, ethnic minorities and so on.

In some of the posters we find a repetition of colours or symbols that for the Chinese viewer have significant meanings and which are immediately recognizable. The British Library Chinese collection also includes some examples of official posters for the so-called yang ban xi (样板戏). Women Who Found A Way Creating a Women's Language. By Christie K K Leung Off Our Backs, Nov/Dec 2003 In ancient China, women were excluded from any standard education. Education of a man was a very good investment that would be rewarded if one day this man became a government official and was able to bring glory to his ancestors.

But the education of a woman was considered to be the most extravagant luxury. Women did not need to know how to read and write since their main function in society was to be virtuous wives and caring mothers. Even though poor women were deprived of the right to receive any standard education, some still found a way. Nushu means "women's writing" or "women's script. " Ching Shih - The Chinese History-Made Female Pirate. Ching Shih(郑氏) was a famous female pirate in late Qing China. Ching Shih's real name is unknown as is where she was born. She was born in 1785. Qiu Jin (November 8, 1875 - July 15, 1907) was a... - Asian History. Photos, letters from family of China’s last emperor on display in Hyogo.

Carlos Rojas, "Homesickness: Culture, Contagion, and National Transformation in Modern China" (Harvard UP, 2015) ‘China’s Worst Policy Mistake’? by Nicholas D. Kristof. Words can be Weapons. The women of China’s workforce. China’s easy riders. China's Lost Rivers - Angel Hsu and William Miao. As recently as 20 years ago, there were an estimated 50,000 rivers in China, each covering a flow area of at least 60 square miles.

The Suicide Catcher: Big Issues. The power of human technology. By Pichi Chuang. 马军 Ma Jun. Fake-bamboo-leaves;-(plastic,cloth) Playing the market - China's small investors. Some are in it purely for the money. Others just want a few extra yuan to buy a meal. And then there are also those who trade for fun or to spend time among friends. Chinese researchers have genetically modified human embryos—yet again. Rountable on the Poetry of Xu Lizhi. A Suicide Survivor: the life of a Chinese migrant worker at Foxconn 自殺未遂 ある富士康移民労働者の暮らし. Lu Zhang, "Inside China's Automobile Factories" (Cambridge UP, 2014) Chinese Labor Divided. The-disintegration-of-rural-china. Faked in China. The Chinese Lingerie Venders of Egypt.

Ruth Hayhoe, "China Through the Lens of Comparative Education: The Selected Works of Ruth Hayhoe" (Routledge. 2015) Winnie Won Yin Wong, "Van Gogh on Demand: China and the Readymade" (University of Chicago Press, 2014) How to Be a Chinese Democrat: An Interview with Liu Yu by Ian Johnson. Mao’s China: The Language Game by Perry Link.