Original Prusa i3 MK2 3D Printer kit with LCD. These 3D-Printed Sneakers Are Made From The Trash We Throw Into The Ocean. Coinciding with the historic Paris climate change agreement, sporting goods giant adidas has shown off its new sneakers. 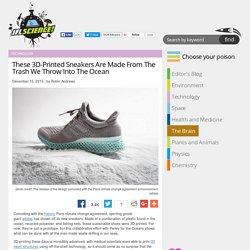 Made of a combination of plastic found in the ocean, recycled polyester, and fishing nets, these sustainable shoes were 3D printed. NASA Just Emailed A Wrench To The International Space Station. For the first time ever, hardware designed on the ground has been emailed to space to meet the needs of an astronaut. 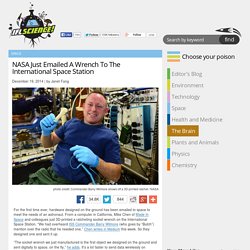 From a computer in California, Mike Chen of Made In Space and colleagues just 3D-printed a ratcheting socket wrench on the International Space Station. “We had overheard ISS Commander Barry Wilmore (who goes by “Butch”) mention over the radio that he needed one,” Chen writes in Medium this week. So they designed one and sent it up. Vytisknout zbraň stojí 10 tisíc. Lidé to už zkouší, tvrdí vedoucí tiskárny. Před rokem se mladý Japonec Yoshitomo Imura pochlubil vytisknutou 3D zbraní. 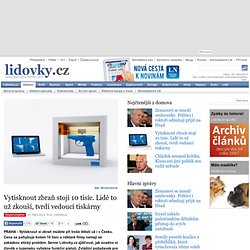 Arduino Leaks a Peek of Their Upcoming 3D Printer. Arduino, known for creating an easy-to-use microcontroller revolution, is about to launch its own 3D printer. 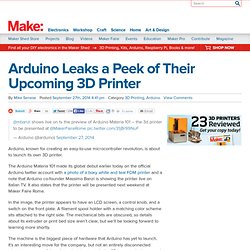 The Arduino Materia 101 made its global debut earlier today on the official Arduino twitter account with a photo of a boxy white and teal FDM printer and a note that Arduino co-founder Massimo Banzi is showing the printer live on Italian TV. It also states that the printer will be presented next weekend at Maker Faire Rome. In the image, the printer appears to have an LCD screen, a control knob, and a switch on the front plate.

A 3D Printer That Turns Coke Bottles Into Whatever You Can Imagine. Mota $99 3D Printer: Too Good To Be True. An affordable yet high quality consumer 3D printer has turned out too good to be true, surprising no one. 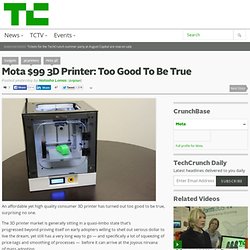 The 3D printer market is generally sitting in a quasi-limbo state that’s progressed beyond proving itself on early adopters willing to shell out serious dollar to live the dream, yet still has a very long way to go — and specifically a lot of squeezing of price-tags and smoothing of processes — before it can arrive at the joyous nirvana of mass adoption.

Analyst Gartner would describe this moment as the descent into hell the trough of disillusionment. Indeed, its 2013 hype cycle graphic pegged 3D printers teetering at the pinnacle of inflated expectations and about to take a big old nose-dive… It’s therefore the best of times (peak interest) and the worst of times (failure to live up to expectations) for consumer 3D printers. Latest to feel the sting of reality on their cheek is Mota. It’s also interesting to note that Mota floundered on its approach to openness. Plastics that can be recycled for 3D printing — Perpetual Plastic Project. Okay, so we're heading towards the 2 year anniversary of Perpetual Plastic Project. 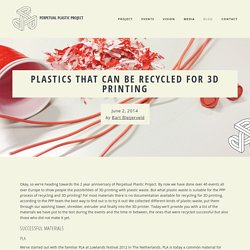 By now we have done over 40 events all over Europe to show people the possibilities of 3D printing with plastic waste. But what plastic waste is suitable for the PPP process of recycling and 3D printing? For most materials there is no documentation available for recycling for 3D printing, according to the PPP team the best way to find out is to try it out! We collected different kinds of plastic waste, put them through our washing tower, shredder, extruder and finally into the 3D printer.

Today we'll provide you with a list of the materials we have put to the test during the events and the time in between, the ones that were recycled successful but also those who did not make it yet. Dood présente DOM: Digital Object Maker. The project Who are we? 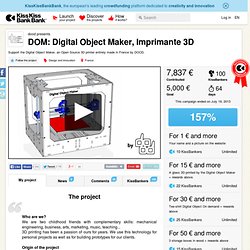 We are two childhood friends with complementary skills: mechanical engineering, business, arts, marketing, music, teaching... 3D printing has been a passion of ours for years. We use this technology for personal projects as well as for building prototypes for our clients. Home - Ultimaker. The Buccaneer® Micro 3D printer Kickstarter funding: $1 million in just one day. Micro, an unusually sleek 3D printer, is about to hit $1 million in funding on Kickstarter just a day after it started raising funds. 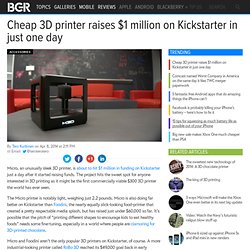 The project hits the sweet spot for anyone interested in 3D printing as it might be the first commercially viable $300 3D printer the world has ever seen. The Micro printer is notably light, weighing just 2.2 pounds. Cube 3D printer - Home 3D printer to turn your ideas into real objects. EKOCYCLE: Transforming 3D Printing Using Recycled Plastic Bottles. There are three types of people: those who have tried 3D printing, those who are fascinated by it and can’t wait to try it and those who have no idea what it is — yet. But a new collaboration between EKOCYCLE and 3D Systems is making the technology more accessible for novices and experienced users alike. The EKOCYCLETM Cube® 3D Printer allows home users the ability to create new, beautiful and meaningful objects with a groundbreaking printer filament made in part from assorted post-consumer recycled plastic bottles. The Cube joins a growing collection of EKOCYCLE products, a brand launched by will.i.am and The Company to promote sustainability through aspirational, yet attainable lifestyle products made in part from recycled material. Gartner Remains Cautious Over Consumer Level 3D Printing. Market leading IT research and advisory firm, Gartner, suggests a minimum of five to ten years for the consumer level adoption of 3D printing. 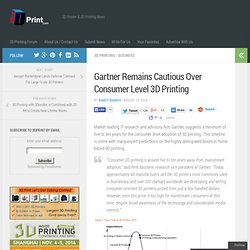 This timeline is inline with many expert predictions on the highly anticipated boom in home based 3D printing. “Consumer 3D printing is around five to ten years away from mainstream adoption,” said Pete Basiliere, research vice president at Gartner. “Today, approximately 40 manufacturers sell the 3D printers most commonly used in businesses, and over 200 startups worldwide are developing and selling consumer-oriented 3D printers, priced from just a few hundred dollars.

However, even this price is too high for mainstream consumers at this time, despite broad awareness of the technology and considerable media interest.” 3D Printers That Use Recycled Plastic - 3D Printing Hub. 13 Flares Google+ 1 Facebook 11 Twitter 1 Pin It Share 0 Email -- Email to a friend 13 Flares × Yes, the 3d printer is cool, and it can print anything you want, whenever, wherever… But you still have to fill ‘em with €25 plastic spools.

If it were only a little cheaper to use them… Or is it? Well, now you can! Disruptions: 3-D Printing Is on the Fast Track. Will the future be printed in 3-D? At first glance, looking at past predictions about the future of technology, prognosticators got a whole lot wrong. 3-D Printing Will Change the World. To anyone who hasn’t seen it demonstrated, 3-D printing sounds futuristic—like the meals that materialized in the Jetsons’ oven at the touch of a keypad. But the technology is quite straightforward: It is a small evolutionary step from spraying toner on paper to putting down layers of something more substantial (such as plastic resin) until the layers add up to an object. Environmental Life Cycle Analysis of Distributed Three-Dimensional Printing and Conventional Manufacturing of Polymer Products - ACS Sustainable Chemistry & Engineering.

†Department of Materials Science & Engineering and ‡Department of Electrical & Computer Engineering, Michigan Technological University, Houghton, Michigan, United States ACS Sustainable Chem. Eng., 2013, 1 (12), pp 1511–1519. Personal 3-D Printer Sales Jump 35,000% Since 2007. Sales of 3-D printers for personal use have exploded since 2007, mimicking the personal-computing revolution of the 1990s, as the market expands from industrial- grade systems costing as much as $1 million.

The CHART OF THE DAY shows sales of printers that create solid objects and cost less than $5,000 grew more than 35,000 percent to 23,265 in 2011 from 66 five years ago, according to a report from Wohlers Associates, Inc., a consulting firm in Fort Collins, Colorado. Sales of printers averaging $73,220 rose 31 percent, to 6,494 from 4,938. Until recently, 3-D printing was limited to large companies that could afford the industrial machines. Daimler AG, Honda Motor Co. (7267), Boeing Co.

Benkler first introduced the term in his 2002 paper "Coase's Penguin, or Linux and the Nature of the Firm",[6] whose title refers to the Linux mascot and to Ronald Coase, who originated the transaction costs theory of the firm that provides the methodological template for the paper's analysis of peer production. Who make 3D printers? These Affordable 3-D Printers Are Impressive—And Plagued by Weak Software.