Yahoo and the Online Universe According to Verizon. “There’s not really any synergy between Verizon’s core business and the AOL and Yahoo play,” Mr. 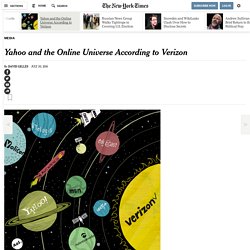 Wieser said. Yet even before it scooped up AOL and Yahoo, Verizon set about trying to remake itself. In recent years, Verizon has spent more than $10 billion on deals. Some have been successful. EdgeCast and UpLynk, companies that serve video content and video advertising, still have growing revenues. A decade ago Verizon launched Fios, an expensive landline cable television and internet service. CES: Steve Burke Explains Why NBCUniversal Invested In BuzzFeed, Vox. Inside NBCU-BuzzFeed-Vox Hook-Up: Will the Corporate Goliath Swallow Cute Cats? “Preservation of culture is key to making this work,” media consultant Jennifer Kavanagh tells TheWrap With two major investments, NBCUniversal became a potential digital powerhouse when it recently poured in $400 million in BuzzFeed and Vox. 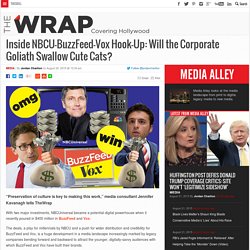 The deals, a play for millennials by NBCU and a push for wider distribution and credibility for BuzzFeed and Vox, is a huge development in a media landscape increasingly marked by legacy companies bending forward and backward to attract the younger, digitally-savvy audiences with which BuzzFeed and Vox have built their brands. The potential financial and credibility gains for NBCU are clear, but some wonder if the playful, independent startup vibe that built the digital giants will fall prey to the realities of corporate media. 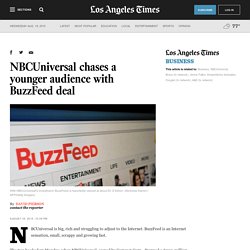 BuzzFeed is an Internet sensation, small, scrappy and growing fast. The two hooked up Monday, when NBCUniversal, owned by Comcast Corp., dropped a $200-million equity investment on BuzzFeed's cash pile. AT&T Closes $49 Billion DirecTV Buy. After Sapient Acquisition, Publicis' Digital Growth Will Exceed Even Maurice Lévy's Plans. Publicis Groupe is ahead of its 2018 goal to derive 50 percent of revenue from its digital business, Maurice Lévy told analysts in Paris today. 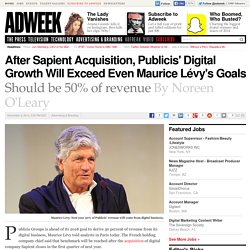 The French holding company chief said that benchmark will be reached after the acquisition of digital company Sapient closes in the first quarter of next year. In releasing its third-quarter results in October, Publicis said it rings up 42 percent of revenue from its digital operations. Lévy, accompanied by Publicis Groupe chief strategist Rishad Tobaccowala and CFO Jean-Michel Etienne, spent two hours selling investors on the company’s digital transformation, which began eight years ago with the $1.3 billion acquisition of Digitas. Much of the presentation dealt with the rationale behind the Sapient acquisition, which adds 13,000 digital employees and new capabilities in business consulting, e-commerce and global production in addition to boosting the company’s share of digital revenue.

Hearst Buys 25% Stake In YouTube Network AwesomenessTV For $81.25 Million. Hasbro Is Said to Be in Talks to Buy DreamWorks Animation. Photo. 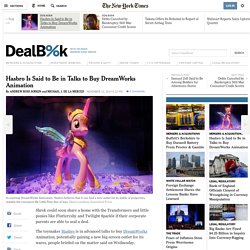 Facebook Buying Oculus Virtual-Reality Company for $2 Billion. DreamWorks Talks May Signal Consolidation Wave by Cash-Rich Asian Companies. SoftBank CEO Masayoshi Son is on the hunt to acquire name-brand properties like DWA The hype over whether SoftBank may purchase DreamWorks Animation is starting to cool down, but not the talk of what such a deal would mean. 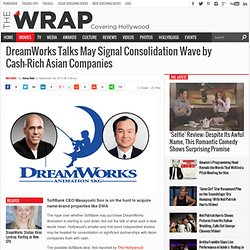 Hollywood's smaller and mid-sized independent studios may be headed for consolidation or significant partnerships with Asian companies flush with cash. The possible SoftBank deal, first reported by The Hollywood Reporter, would have valued DWA at $3.4 billion, with SoftBank offering to purchase it at $32 a share. The news sent DWA's stock price soaring on Monday, up 26 percent on closing, but the price retreated in after-hours trading amid a new round of reports that the talks were falling apart. Amazon completes acquisition of Twitch. Amazon's acquisition of Twitch is complete, bringing the online video streaming company into the retail giant's fold. 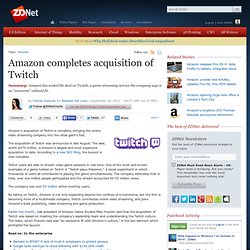 The acquisition of Twitch was announced in late August. The deal, worth $970 million, is Amazon's largest and most expensive acquisition to date. Maker Studios ‘Mostly a Distribution Play’ for Disney. The role Maker Studios will play inside the Walt Disney Co. is getting a little clearer months after the network of online channels was acquired for $500 million. 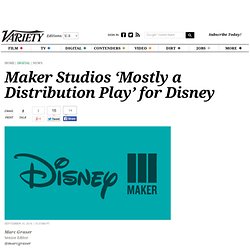 Disney describes Maker as “mostly a distribution play,” according to chief financial officer Jay Rasulo, who spoke Wednesday at Goldman Sachs’ Communacopia Conference in New York. But Maker also is also being positioned alongside Marvel, Lucasfilm and Walt Disney Animation Studios as “a big studio” and “content creator” for the Mouse House in the future. That’s largely because of the massive audience of millennials that Maker has been able to attract to its channels.

Since Disney purchased the company at the end of March, Maker has grown from 4 billion monthly views to 9 billion, and now has over 450 million subscribers to its channels, Rasulo said. Amazon Explains Why It Just Paid Nearly $1 Billion for Twitch. Time Warner Returns Confront Bewkes With Growth Test. Rupert Murdoch was deterred in his effort to buy Time Warner Inc. 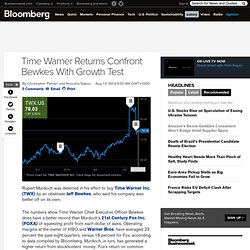 (TWX) by an obstinate Jeff Bewkes, who said his company was better off on its own. The numbers show Time Warner Chief Executive Officer Bewkes does have a better record than Murdoch’s 21st Century Fox Inc. (FOXA) of squeezing profit from each dollar of sales. Operating margins at the owner of HBO and Warner Bros. have averaged 23 percent the past eight quarters, versus 18 percent for Fox, according to data compiled by Bloomberg.

Murdoch, in turn, has generated a higher return from stockholders’ money: Fox’s return on common equity averaged 21 percent; Time Warner’s was 12 percent. AT&T Joint Venture in Talks to Buy Fullscreen - WSJ. Disney's Other Video Business Eyes Sponsors After Layoffs. YouTube to Acquire Videogame-Streaming Service Twitch for $1 Billion: Sources. Google’s YouTube has reached a preliminary deal to buy Twitch, a popular videogame-streaming company, for more than $1 billion, according to sources familiar with the pact. 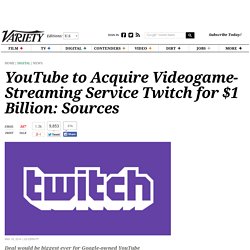 The deal, in an all-cash offer, is expected to be announced imminently, sources said. If completed the acquisition would be the most significant in the history of YouTube, which Google acquired in 2006 for $1.65 billion. The impending acquisition comes after longtime Google ad exec Susan Wojcicki was named CEO of YouTube earlier this year. Reps for YouTube and Twitch declined to comment. SEE ALSO: Why Google Wants to Hitch Twitch and YouTube San Francisco-based Twitch lets users upload and watch free, live gameplay videos that can be streamed from Microsoft Xbox One and Sony PlayStation 4 consoles, and also sells a $9 monthly ad-free subscription and subscriptions to individual channels for about $5 per month.

YouTube is preparing for U.S. regulators to challenge the Twitch deal, according to sources. AT&T Agrees to Deal to Acquire DirecTV for $48.5 Billion. Arris Gets DoJ OK For Its $2.35B Acquisition Of Motorola Home Broadband Business From Google, Deal Closing Around April 17. Another key chapter in Google’s $12.5 billion acquisition of Motorola is getting concluded. Today Arris announced that it has received approval from the U.S. Department of Justice for its acquisition of Motorola Home broadband unit from Google — a deal valued at $2.35 billion when it was announced in December 2012 — $2.05 billion in cash and approximately $300 million in newly issues Arris shares. Dropbox acquires Mailbox to help grow the Gmail app for iOS quickly. In case you haven't heard, Mailbox is the iOS app that everyone wants to get their grubby little paws on. The hip new e-mail app is an alternative interface for Gmail accounts (yes, it only works with Gmail).

Report claims Google in talks to acquire WhatsApp for $1 billion. Google is in talks to acquire cross-platform messaging application WhatsApp, claims a Digital Trend report. Google and WhatsApp have been talking for "four or five weeks," according to Digital Trends, citing a person who claims to have knowledge of the negotiations. So far, WhatsApp has been able to push the acquisition price to nearly $1 billion by "playing hardball," the source says. WhatsApp is one of the most popular messaging applications available to mobile users. The app allows users on almost any mobile platform -- including Android, iOS, BlackBerry, and Windows Phone -- to send instant messages, images, audio, and video messages to one another.

The messaging app essentially allows for cross-platform texting without having to pay for SMS. Apple In Talks To Acquire Beats For $3.2 Billion, Says FT. Update: Apple announced the $3 billion deal on May 28th. This could be Apple’s largest acquisition to date. According to the Financial Times, Apple is close to a deal to acquire Beats Electronics. Beats is the maker of the popular Beats headphones, as well as the music service, Beats Music.

If it closes, the deal should be announced next week, the FT reports. The two companies have yet to agree on some financial details.