Watch Neil deGrasse Tyson Explain How Wealthy Bill Gates Is or How Much is a Billion? It’s often hard to imagine just how big a billion actually is. 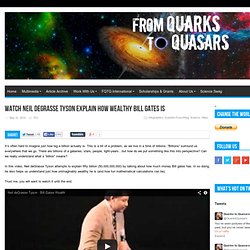 This is a bit of a problem, as we live in a time of billions. “Billions” surround us everywhere that we go. Mathematics and the Universe. Question: Do you agree with wolfram, that mathematics is only able to explain a limited amount of the universe, and that the possibility of using other methods such as computer code will be necessary in the future? 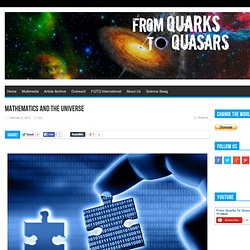 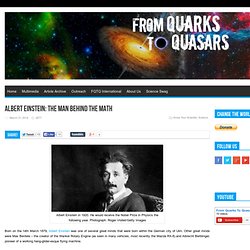 He would receive the Nobel Prize in Physics the following year. Photograph: Roger Viollet/Getty Images Born on the 14th March 1879, Albert Einstein was one of several great minds that were born within the German city of Ulm. Other great minds were Max Bentele – the creator of the Wankel Rotary Engine (as seen in many vehicles, most recently the Mazda RX-8) and Albrecht Berblinger, pioneer of a working hang-glider-esque flying machine. At an early age, his father, a well respected engineer, moved the family to Munich where he aimed his electrical product sales at supplying direct current electrical equipment – this was a highly competitive market as he was against the alternating current market. Over the course of the next few years, up to age 10, Albert would learn of mathematical thinking and design machinery and mechanical devices as an outlet for his growing comprehension of the world around him. Albert Einstein via WikiMedia Otherwise known as E = mc².

Math: The Language of the Universe. “Unless you’re going to be an engineer or scientist, you’ll never use math”. 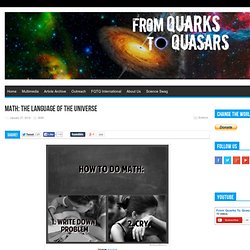 This is one of the most utterly false statements that I have ever heard. Just as humans use verbal sounds in order to communicate ideas and exchange information, numbers (more specifically, math) is system of language – the language of nature. Every day, every person on Earth participates in nature’s beautiful song of numbers without even knowing it. Whether we like it or not, the universe is math, and you’re using it right now. Every morning when I wake up, the math starts to hit me.

Yitang Zhang, twin primes conjecture: A huge discovery about prime numbers—and what it means for the future of math. Photo courtesy of Lisa Nugent/UNH Photographic Services Last week, Yitang “Tom” Zhang, a popular math professor at the University of New Hampshire, stunned the world of pure mathematics when he announced that he had proven the “bounded gaps” conjecture about the distribution of prime numbers—a crucial milestone on the way to the even more elusive twin primes conjecture, and a major achievement in itself. 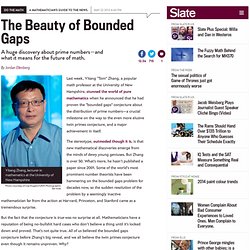 The stereotype, outmoded though it is, is that new mathematical discoveries emerge from the minds of dewy young geniuses. But Zhang is over 50. What’s more, he hasn’t published a paper since 2001. How gang members behave like animals... and maths experts are now predicting where they will fight rivals with 99% accuracy. Jeffrey Brantingham, UCLA anthropologist, uses statistics to study crimeHe used the Lotka-Volterra equation to accurately predict fight locationsThe theory states that species claim territories whose boundaries form a perpendicular line halfway between each group’s home By Amanda Williams Published: 09:12 GMT, 26 March 2013 | Updated: 09:14 GMT, 26 March 2013 Maths experts have used geometric equations learned from wild animals to predict the location of fights between rival gangs with almost 99 per cent accuracy. 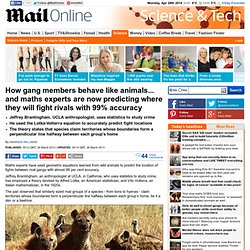 Jeffrey Brantingham, an anthropologist at UCLA, in California, who uses statistics to study crime, has employed a theory devised by Alfred Lotka, an American statistician, and Vito Volterra, an Italian mathematician, in the 1920s. The pair observed that similarly sized rival groups of a species - from lions to hyenas - claim territories whose boundaries form a perpendicular line halfway between each group’s home, be it a den or a beehive. African wild dogs hunting. How to make a Mobius bagel: Sliced just right the breakfast snack makes linked halves with curious mathematical properties. 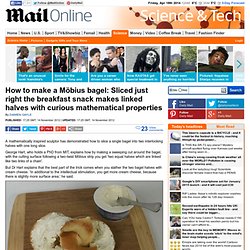 George Hart, who holds a PhD from MIT, explains how by making a sweeping cut around the bagel, with the cutting surface following a two-twist Möbius strip you get 'two equal halves which are linked like two links of a chain'. But Dr Hart explains that the best part of the trick comes when you slather the two bagel halves with cream cheese. 'In additional to the intellectual stimulation, you get more cream cheese, because there is slightly more surface area,' he said. Systems Theories. Complex Systems. Physicists Predict Properties of Prime Numbers from Freezing Liquids. Physicists from Queen Mary’s School of Mathematical Sciences, together with colleagues from Bristol University, discovered a pattern in frozen glasses that relates to prime numbers. 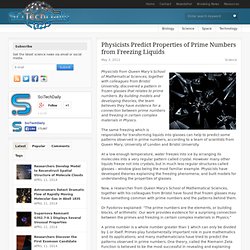 By building models and developing theories, the team believes they have evidence for a connection between prime numbers and freezing in certain complex materials in Physics. The same freezing which is responsible for transforming liquids into glasses can help to predict some patterns observed in prime numbers, according to a team of scientists from Queen Mary, University of London and Bristol University.

At a low enough temperature, water freezes into ice by arranging its molecules into a very regular pattern called crystal. However many other liquids freeze not into crystals, but in much less regular structures called glasses – window glass being the most familiar example. Physicists have developed theories explaining the freezing phenomena, and built models for understanding the properties of glasses. Wrinkled doughnut solves geometrical mystery - physics-math - 30 April 2012. This may be the weirdest doughnut you have ever seen, but it solves a long-standing geometrical puzzle that evaded mathematicians including Nobel laureate John Nash, who inspired the film A Beautiful Mind. 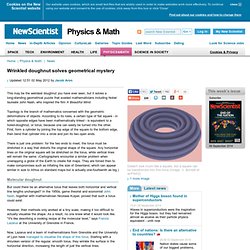