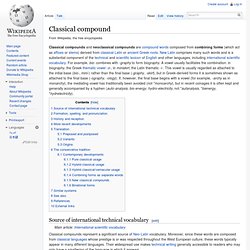 Moreover, since these words are composed from classical languages whose prestige is or was respected throughout the West European culture, these words typically appear in many different languages. Their widespread use makes technical writing generally accessible to readers who may only have a smattering of the language in which it appears. Not all Western European languages have been equally receptive to classical technical compounds. German, for instance, has historically attempted to create its own technical vocabulary from native elements.

Astronaut, astrology, astrophysics: About Combining Forms, Classical Compounds and Affixoids. Category:English double contractions. List of scandals with "-gate" suffix. Keith Olbermann/Bushed - Wikiality, the Truthiness Encyclopedia. 3D-landcape, 3D-language? In yeste rday’s post I mentioned that languages of the Northeast Caucasus, such as Avar, Tzes and Tabasaran, are famous for their extremely rich case systems; most of their case distinctions are used to mark various aspects of location and direction. 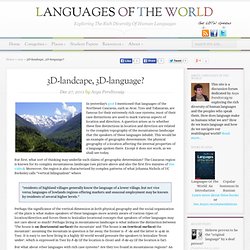 A question arises as to whether these fine distinctions in location and direction are related to the complex topography of the mountainous landscape that the speakers of these languages inhabit. This would be an example of geographic determinism: the physical geography of a location affecting the internal properties of a language spoken there. Except it does not work, as we shall see today. Morphology. As linguists, we often tell our students — without giving it a second thought — that all languages are equally grammatically complex. 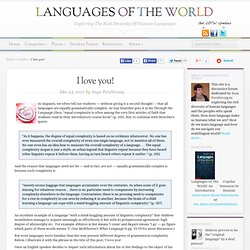 As Guy Deutcher puts it in his Through the Language Glass, “equal complexity is often among the very first articles of faith that students read in their introductory course book” (p. 103). But, to continue with Deutcher’s quote: “As it happens, the dogma of equal complexity is based on no evidence whatsoever. No one has ever measured the overall complexity of even one single language, not to mention all of them. No one even has an idea how to measure the overall complexity of a language. … The equal complexity slogan is just a myth, an urban legend that linguists repeat because they have heard other linguists repeat it before them, having in turn heard others repeat it earlier.” And the reason that languages need not be — and in fact, are not — equally grammatically complex is because such complexity is Like this post? Language Families. In the last couple of posts, I’ve discussed the issue of grammatical complexity and have shown that even if an objective measure of such complexity is absent, languages clearly differ as to which grammatical distinctions they “care about” and how they encode them. 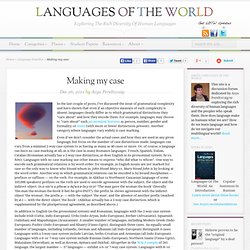 For example, languages may choose to “care about” such pronominal features as person, number, gender and formality; or tense (with more or fewer distinctions present). Another category where languages vary widely is case marking. Even if we don’t consider the actual cases and how they are used in any given language, but focus on the number of case distinctions made, languages can vary from a minimal 2-way case system to as having as many as 40 cases or more.

Tigons, ligers, leguars, and jagupards, oh my! Panthera hybrid. Jaguar and leopard hybrids[edit] A leguar or lepjag is the hybrid of a male leopard and a female jaguar. 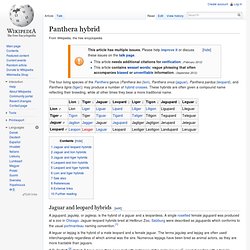 The terms jagulep and lepjag are often used interchangeably regardless of which animal was the sire. Numerous lepjags have been bred as animal actors, as they are more tractable than jaguars. A.D. Bartlett [2] stated: "I have more than once met with instances of the male jaguar (F. onca) breeding with a female leopard (F. leopardus). In Barnabos menagerie (in Spain), a jaguar gave birth to two cubs from a union with a black leopard; one resembled the dam, but was somewhat darker, the other was black with the rosettes of the dam showing.[3] Since melanism in the panther (leopard) is recessive, the jaguar would either have been black or be a jaguar-black leopard hybrid itself, carrying the recessive gene. Category:Latin suffixes. » Latin language » Morphemes » Suffixes Affixes located at the end of Latin words. 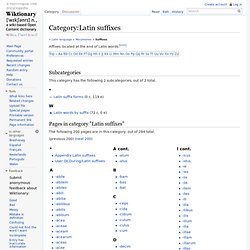 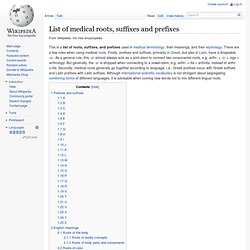 Morphology. Clitic. Clitics can belong to any grammatical category, although they are commonly pronouns, determiners, or adpositions. 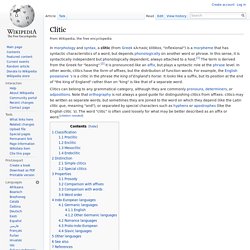 Note that orthography is not always a good guide for distinguishing clitics from affixes: clitics may be written as separate words, but sometimes they are joined to the word on which they depend (like the Latin clitic que, meaning "and"), or separated by special characters such as hyphens or apostrophes (like the English clitic ’s). The word "clitic" is often used loosely for what may be better described as an affix or word. [citation needed] Classification[edit] Clitics fall into various categories depending on their position in relation to the word to which they are connected.[2] Proclitic[edit] A proclitic appears before its host.[2] It is common in Romance languages. Stemming. Stemming programs are commonly referred to as stemming algorithms or stemmers. 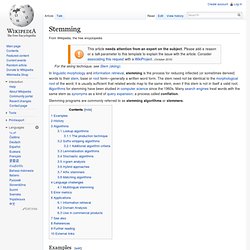 Examples[edit] A stemmer for English, for example, should identify the string "cats" (and possibly "catlike", "catty" etc.) as based on the root "cat", and "stemmer", "stemming", "stemmed" as based on "stem". A stemming algorithm reduces the words "fishing", "fished", and "fisher" to the root word, "fish". On the other hand, "argue", "argued", "argues", "arguing", and "argus" reduce to the stem "argu" (illustrating the case where the stem is not itself a word or root) but "argument" and "arguments" reduce to the stem "argument". History[edit] The first published stemmer was written by Julie Beth Lovins in 1968.[1] This paper was remarkable for its early date and had great influence on later work in this area.

A later stemmer was written by Martin Porter and was published in the July 1980 issue of the journal Program.