Team Light Beam Index. Korean – Google Drive. Which is harder? Japanese or Korean? In my previous post, I compared the difficulty of Japanese and (Mandarin) Chinese by looking at several aspects of the two languages. 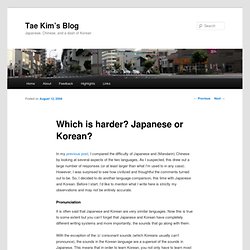 As I suspected, this drew out a large number of responses (or at least larger than what I’m used to in any case). However, I was surprised to see how civilized and thoughtful the comments turned out to be. So, I decided to do another language comparison, this time with Japanese and Korean. Before I start, I’d like to mention what I write here is strictly my observations and may not be entirely accurate. Pronunciation It is often said that Japanese and Korean are very similar languages. With the exception of the /z/ consonant sounds (which Koreans usually can’t pronounce), the sounds in the Korean language are a superset of the sounds in Japanese. With Japanese, though you sound like crap without the proper pitches, you can still make yourself understood with even the worst accents (most of the time).

How to say SORRY in Korean. What's MIAN? (KWOW #6) CRAP SALAD!? Why you must know Konglish (KWOW #85) 7 Ways Koreans are Misunderstood (KWOW #93) Cal Poly Pomona. Helpful Hints What you have to know.... 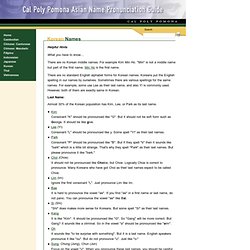 There are no Korean middle names. For example Kim Min Ho. "Min" is not a middle name but part of the first name. Min Ho is the first name. There are no standard English alphabet forms for Korean names. Last Name: Almost 30% of the Korean population has Kim, Lee, or Park as its last name. Kim Consonant "K" should be pronounced like "G". First names - Male Jung Hun (Jung Hoon) As explained above, a consonant + u + n should be pronounced like sun. First name - Female. Eun Eun should be pronounced like asylum. Do not be confused. You can learn more about Korean names at Wikipedia. "-" means pronounce separately. Questions, comments, or suggestions for new links? Hangulposter_AboutLetters. The Korean's English Acquisition, and the Best Method to Master a Foreign Language, Guaranteed. Dear Korean, My name is The English Teacher. 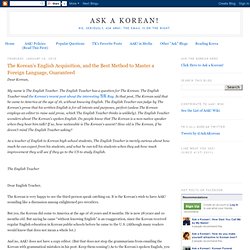 But yes, the Korean did come to America at the age of 16 years and 8 months. And no, AAK! zKorean - Learn the Korean Alphabet, Grammar, Vocabulary & Culture. How to learn Hangul. Hangul = 한글 is a South Korean writing system. 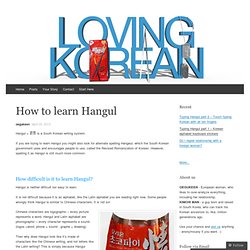 If you are trying to learn Hangul you might also look for alternate spelling Hangeul, which the South Korean government uses and encourages people to use, called the Revised Romanization of Korean. However, spelling it as Hangul is still much more common. How difficult is it to learn Hangul? Hangul is neither difficult nor easy to learn. It is not difficult because it is an alphabet, like the Latin alphabet you are reading right now. On this Korean packaging of Choco pie you can see the big Chinese character 情 on the right which means sentiment, emotion. Chinese characters are logographic – every picture represents a word. Then why does Hangul look like it’s made of characters like the Chinese writing, and not letters like the Latin writing? 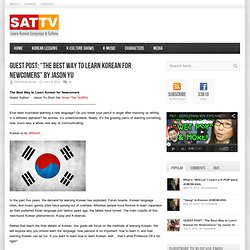 Do you break your pencil in anger after messing up writing in a different alphabet? No worries, it’s understandable. Really. It’s the growing pains of learning something new, much less a whole new way of communicating. Korean is no different. In the past five years, the demand for learning Korean has exploded. Rather that teach the finer details of Korean, this guide will focus on the methods of learning Korean. With that being said, let get started! Learn to read Korean in 15 minutes.