Why we chose Vue.js. Native Apps are Doomed – JavaScript Scene – Medium. From now on, I won’t be building any more native apps. 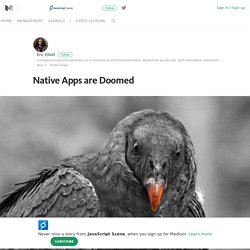 All my apps going forward will be progressive web apps. Progressive web apps are web applications which are designed to work even more seamlessly on mobile devices than native mobile apps. What do I mean by “more seamlessly?” I mean that most web traffic comes from mobile devices, and that users install between 0–3 new apps per month, on average. That means that people aren’t spending a lot of time looking for new apps to try out in the app store, but they are spending lots of time on the web, where they might discover and use your app.

Progressive web applications start out just like any other web app, but when a user returns to the app and demonstrates through usage that they’re interested in using the app more regularly, browsers will invite the user to install the app to their home screens. This is where it gets interesting. This has been a long time coming. Some History In the early days of the iPhone, there was no app store. Retiring Python as a Teaching Language. For the last ten years, my standard advice to someone looking for a programming language to teach beginners has been start with Python. 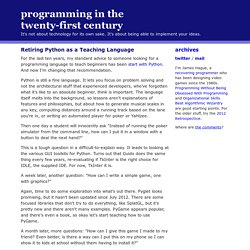 And now I'm changing that recommendation. Python is still a fine language. State of the Art JavaScript in 2016 – JavaScript and Opinions – Medium. The State Of JavaScript Developer Survey. Designing a Web App @ 2016 by Alain Galvan on CodePen. Making web apps has gotten pretty complicated, it seems every language and company wants to come up with their own way of doing it! 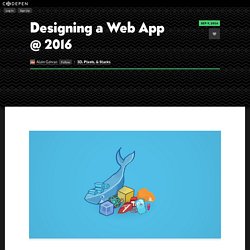 Deep down all we're doing is serving html, css, and javascript to a user, but there's a lot to bear in mind: New Language Features - like modules, generators, decarators, promises, async/await, etc.Legacy Suport (polyfills, shims, vendor prefixes) for JavaScriptBackend Programming - Writing a server in JavaScript, Python, Go, C++, you name it.Automation - streaming tasks like compiling our apps and compressing our images and making icon fonts.

Deploying your app with services like Docker, AWS, DigitalOcean, etc.Dev Ops - load balancing your app, working with microservices and a polyglot architecture.Testing - unit testing your app, linting, type checking, etc. The Deep Roots of Javascript Fatigue. I recently jumped back into frontend development for the first time in months, and I was immediately struck by one thing: everything had changed. 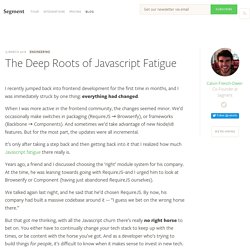 When I was more active in the frontend community, the changes seemed minor. We’d occasionally make switches in packaging (RequireJS → Browserify), or frameworks (Backbone → Components). And sometimes we’d take advantage of new Node/v8 features. Scaling On The Cheap — Startups, Wanderlust, and Life Hacking. Scaling On The Cheap “Planning is bringing the future into the present so you can do something about it now” — Alan Lakein I’m going to take a break from my Tech Hiring and Team Building series to write a more technical article. 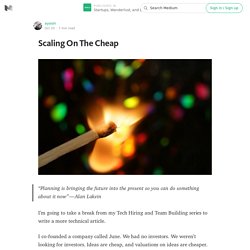 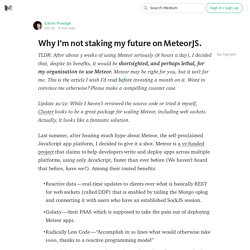 TLDR: After about 3 weeks of using Meteor seriously (8 hours a day), I decided that, despite its benefits, it would be shortsighted, and perhaps lethal, for my organization to use Meteor. jQuery considered harmful. Heh, I always wanted to do one of those “X considered harmful” posts*. 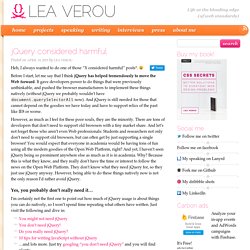 Before I start, let me say that I think jQuery has helped tremendously to move the Web forward. It gave developers power to do things that were previously unthinkable, and pushed the browser manufacturers to implement these things natively (without jQuery we probably wouldn’t have document.querySelectorAll now). And jQuery is still needed for those that cannot depend on the goodies we have today and have to support relics of the past like IE8 or worse. However, as much as I feel for these poor souls, they are the minority. There are tons of developers that don’t need to support old browsers with a tiny market share. No more JS frameworks. No more JS frameworks Stop writing Javascript frameworks. 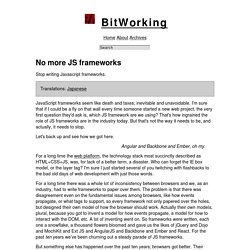 Translations: Japanese JavaScript frameworks seem like death and taxes; inevitable and unavoidable. You have ruined javascript. In the old days In the old days we had some really awful JS being written on pages in a pretty ad-hoc fashion and it caused us huge problems. 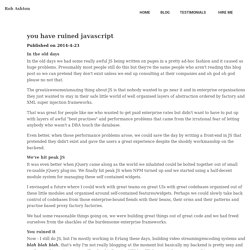 Presumably most people still do this but they're the same people who aren't reading this blog post so we can pretend they don't exist unless we end up consulting at their companies and oh god oh god please no not that. The great/awesome/amazing thing about JS is that nobody wanted to go near it and in enterprise organisations they just wanted to stay in their safe little world of well organised layers of abstraction ordered by factory and XML super injection frameworks. That was great for people like me who wanted to get paid enterprise rates but didn't want to have to put up with layers of awful "best practises" and performance problems that came from the irrational fear of letting anybody who wasn't a DBA touch the database. We've hit peak JS You ruined it Angular.js: service vs provider vs factory? 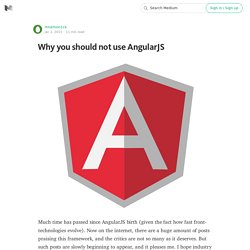 Now on the internet, there are a huge amount of posts praising this framework, and the critics are not so many as it deserves. The State of JavaScript in 2015 - Jimmy Breck-McKye. The JavaScript world seems to be entering a crisis of churn rate. Frameworks and technologies are being pushed out and burned through at an unsustainable speed. But I think the community will adapt and adopt new practices in response. Developers will move, I believe, from monolithic frameworks like Angular.js and Ember to a ‘pick n mix’ of small, dedicated libraries to mitigate the risk of churn and to allow solutions to different concerns to compete separately.

Obviously, this post has big red ‘opinion’ stickers over it. But hear me out.