Apple in the media... 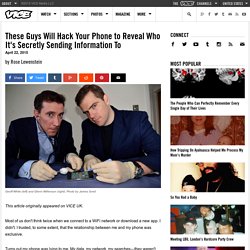 Photo by James Snell. This article originally appeared on VICE UK. Most of us don't think twice when we connect to a WiFi network or download a new app. I didn't. I trusted, to some extent, that the relationship between me and my phone was exclusive. Turns out my phone was lying to me. To help people understand what's really going on with their smartphones, tech journalist Geoff White and ethical hacker Glenn Wilkinson have teamed up to create The Secret Life of Your Mobile Phone —a one-hour performance on interception technologies.

VICE: Tell me about what happens in The Secret Life of Your Mobile Phone. Which companies are you sending information to? What kind of software do you use? Basically, we have two levels of interaction with the software. That's all fairly passive, but the final bit is really interesting. Geoff: And that's basically listening to what the phone is willingly giving out. Is it really? The more invasive stuff? 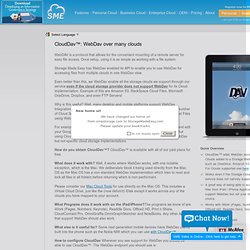 Once setup, using it is as simple as working with a file system. Storage Made Easy has WebDav enabled its API to enable you to use WebDav for accessing files from multiple clouds in one WebDav view. Even better than this, we WebDav enable all the storage clouds we support through our service even if the cloud storage provider does not support WebDav for its Cloud implementation. Example of this are Amazon S3, RackSpace Cloud Files, Microsoft OneDrive, Dropbox, and even FTP Servers! Why is this useful? For example iWork on the iPad only supports WebDav, so if you want to access and edit your Google Docs, Amazon S3, DropBox, or other files through iWork you can't, but using CloudDav™, you can ! 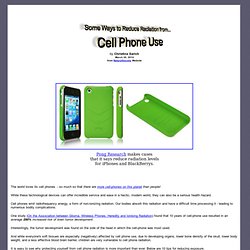 The world loves its cell phones - so much so that there are more cell-phones on this planet than people! While these technological devices can offer incredible service and ease in a hectic, modern world, they can also be a serious health hazard. Cell phones emit radiofrequency energy, a form of non-ionizing radiation. One study (On the Association between Glioma, Wireless Phones, Heredity and Ionising Radiation) found that 10 years of cell-phone use resulted in an average 290% increased risk of brain tumor development.

Interestingly, the tumor development was found on the side of the head in which the cell-phone was most used. It is easy to see why protecting yourself from cell phone radiation is more important than ever. Additional Sources Cancer.gov - Cell Phones and Cancer Risk. Yourecycle : Recyclez votre gsm - Recycleer uw gsm.