The Media teacher's iPad. I should make it clear that I have no particular beef with any other individual device, or operating system, or anything else at which you think I may be showing signs of beefage. 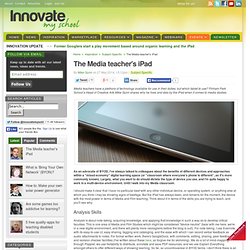 But the iPad has always been, and remains for the moment, the device with the most power in terms of Media and Film teaching. Think about it in terms of the skills you are trying to teach, and you'll see why: Analysis Skills Analysis is about note-taking, acquiring knowledge, and applying that knowledge in such a way as to develop critical faculties.

This is one area of Media and Film Studies which might be considered "device-neutral" (bear with me here, we're in a new digital environment, and there will plenty more neologisms before the blog is out!). Resources and Curation. How to make iPad kids film better. It’s about time I add another post about my actual teaching practice and how my kids use iPads. One set of iPad skills that interests all the kids and gives them something fun to do is professional film making tricks. This would work well with students from the age of 10 to 16. The lesson is divided in 2 : Sound (Sound effects / Dubbing / voiceovers)Camera work (Steady-cam / multi views per moment) The requirements in general are that at least one student in 4 has the iMovie app or equivalent (There are free movie editing apps but they sometimes limit to 30 seconds export – check the App store).

I then take them through some remarkable facts in film making that they might never have considered. Foley – Dubbing – Voiceover One of the difficulties when filming with iPads is that the microphone is too small and too far from the actor or subject to record it properly. The Art of noise making is called Foley, which you will see in the credits of every film. Like this:

Free Apps to Capture, Create and Connect to the Common Core. In the Digital Classroom, teachers have many opportunities to design flexible and engaging student-driven learning experiences that allow them to create. 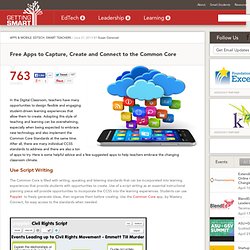 Adopting this style of teaching and learning can be overwhelming, especially when being expected to embrace new technology and also implement the Common Core Standards at the same time. 39 Apps to Promote Student Creativity from edshelf. By edshelf: Reviews & recommendations of tools for education It is always such a pleasure to see student creativity. 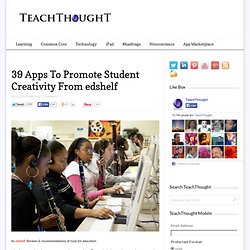 To watch their creative muscles grow and see their fantastic imaginations blossom into works of art. Technology is a great medium through which students can craft their wonders. It offers abilities that aren’t possible in other media. Here is a recommended collection of creative iPad and iPhone apps from Glenda Stewart-Smith of Surrey School District #36 in Canada. Creative ICT: Downloading YouTube videos to mac/ iPad. Since Apple have put a stop to downloading YouTube videos to iPad using the iCab Mobile app Ive started to use this workaround. 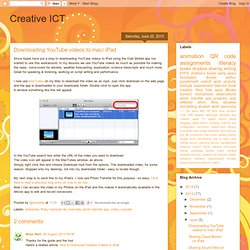 In my lessons we use YouTube videos as much as possible for making the news, voice-overs for adverts, weather forecasting, exploration, science transcripts and much more. Great for speaking & listening, working on script writing and performance. I now use MacTubes on my Mac to download the video as an mp4. Just click download on the web page and the app is downloaded to your downloads folder. Double click to open the app. In the YouTube search box enter the URL of the video you want to download. New App Allows Anyone To Create Musical Scores By Humming Or Singing, No Instruments Required. 10 best iPad art apps for painting and sketching. When the iPad first launched it was pegged squarely as a media consumption device. 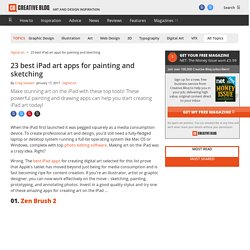 To create professional art and design, you'd still need a fully-fledged laptop or desktop system running a full-fat operating system like Mac OS or Windows, complete with top photo editing software. Making art on the iPad was a crazy idea. Right? Wrong. The best iPad apps for creating digital art selected for this list prove that Apple's tablet has moved beyond just being for media consumption and is fast becoming ripe for content creation. 01.

The sequel to the popular Zen Brush takes what its predecessor does best - emulating the feel of painting with traditional Japanese calligraphy brushes - and builds upon it, with a new drawing engine that's smoother and more fluent than before, making it even easier to lose yourself in the process of creating beautiful Zen art. 02. If you need a full-fat iPad alternative to Photoshop, Pixelmator is about as good as it gets. 03. 04. 05. 06. 07. 08. 09. Five Free iPad Apps for Creating Video Lessons (AKA Flipped Classroom Lessons) One of the things that I’m often asked about is creating explanatory videos on the iPad. 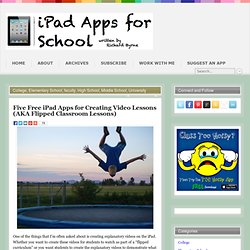 Whether you want to create these videos for students to watch as part of a “flipped curriculum” or you want students to create the explanatory videos to demonstrate what they know, these apps are good choices for reaching those ends. The Knowmia Teach iPad app is an excellent app for creating your own whiteboard videos. Some of the highlights of Knowmia Teach app include the option to use your iPad’s camera to record yourself while drawing on the whiteboard. You will appear in the corner of the screen so that your students can see you while you’re talking them through the lesson.

iPad Creative - iPad Creative. Pages on the iPad works with iCloud but what if you want to collaborate using another Cloud service like Dropbox, Google Docs or Box.net where your documents are already stored? 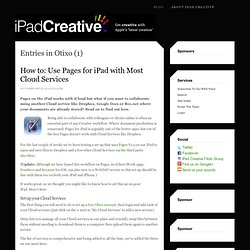 Read on to find out how. Being able to collaborate with colleagues or clients online is often an essential part of any Creative workflow. Where document production is concerned, Pages for iPad is arguably one of the better apps, but out of the box Pages doesn't work with Cloud Services like Dropbox. For the last couple of weeks we've been testing a set up that uses Pages V1.5 on our iPad to open and save files to Dropbox and a few other Cloud Services via the third party site Otixo. ThingLink Launches a Free iPad App.