Walker Evans Quotations and Tips about photography in Printer Friendly Format. Review/Photography - What Walker Evans Saw on His Subway Rides. WASHINGTON, Dec. 27— By 1938, the year he began the series of subway portraits on view at the National Gallery of Art, Walker Evans had already made most of the great photographs on which his reputation is based. 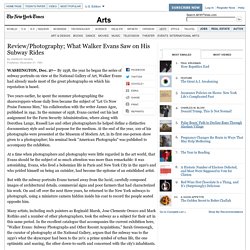 Two years earlier, he spent the summer photographing the sharecroppers whose daily lives became the subject of "Let Us Now Praise Famous Men," his collaboration with the writer James Agee, published in 1941. In the summer of 1938, Evans carried out his last assignment for the Farm Security Administration, where along with Dorothea Lange, Russell Lee and other photographers he helped define a distinctive documentary style and social purpose for the medium. On the Wall: A Reprise For Walker Evans at MoMA. Walker Evans’ Famous Picture of an Alabama Tenant Farmer’s Wife Is Celebrated and Explained. Gen. 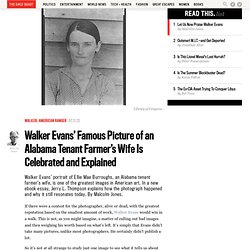 Hiftar worked with Gaddafi, then the CIA. Now he says he'll purge Libya of Islamists and jihadists. Is he his country's savior -- or just another militia leader? MARJ, Libya — Legend has it that in 1987, in the middle of a dirty little war in the Chadian desert, Libyan General Khalifa Hiftar stood with his men as enemy troops flooded onto the airbase he was guarding. Most of the Libyan forces had been driven back across the border or captured during Muammar Gaddafi’s disastrous invasion of Chad. Men who have served with Hiftar said it is this hardheadedness on the battlefield that means he will not give up his latest mission: to “save” Libya by wiping out militias and extremists that have run riot since the 2011 revolt that toppled Gaddafi. But is Hiftar, whose background includes service with both Gaddafi and the CIA, really the man to do it? 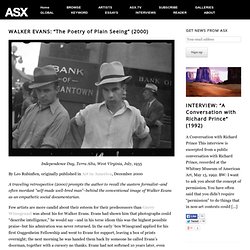 Few artists are more candid about their esteem for their predecessors than Garry Winogrand was about his for Walker Evans. Evans had shown him that photographs could “describe intelligence,” he would say –and in his terse idiom this was the highest possible praise–but his admiration was never returned. In the early ’60s Winogrand applied for his first Guggenheim Fellowship and went to Evans for support, leaving a box of prints overnight; the next morning he was handed them back by someone he called Evans’s doorman, together with a cursory no thanks.

I was mystified. “Disgust in the boat train,” Evans began a sheet of European notes in 1926 or ’27. The Exacting Eye of Walker Evans. PHOTO/arts Magazine. Walker Evans. WALKER EVANS: “Scavenging the Landscape – Walker Evans and American Life” (1996. WALKER EVANS: “The Passion of Walker Evans” (2000. By Daniel Mark Epstein, New Criterion, March 1, 2000 America’s infatuation with photography has thrived upon its easy accessibility. 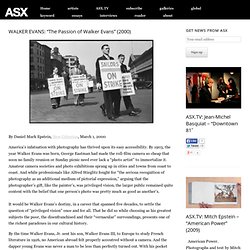 By 1903, the year Walker Evans was born, George Eastman had made the roll-film camera so cheap that soon no family reunion or Sunday picnic need ever lack a “photo artist” to immortalize it. Amateur camera societies and photo exhibitions sprang up in cities and towns from coast to coast. And while professionals like Alfred Stieglitz fought for “the serious recognition of photography as an additional medium of pictorial expression,” arguing that the photographer’s gift, like the painter’s, was privileged vision, the larger public remained quite content with the belief that one person’s photo was pretty much as good as another’s. It would be Walker Evans’s destiny, in a career that spanned five decades, to settle the question of “privileged vision” once and for all. “Fine photography is literature, and it should be,” he would tell students, years later. 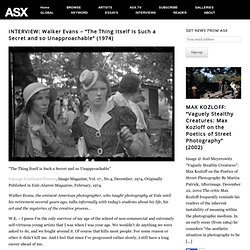 Walker Evans, the eminent American photographer, who taught photography at Yale until his retirement several years ago, talks informally with today’s students about his life, his art and the mysteries of the creative process… W.E. – I guess I’m the only survivor of my age of the school of non-commercial and extremely self-virtuous young artists that I was when I was your age. We wouldn’t do anything we were asked to do, and we fought around it. Of course that kills most people. James Agee & Walker Evans – “Let Us Now Praise Famous Men” (2009. Photographer Walker Evans: answers on a postcard. Long before Martin Parr started collecting picture postcards in the early 1970s, the American photographer Walker Evans had amassed a personal collection of over 9,000 cards, most of them showing ordinary American subjects such as street scenes and notable architectural buildings from towns and cities across the States, dating from about 1900 to 1930. 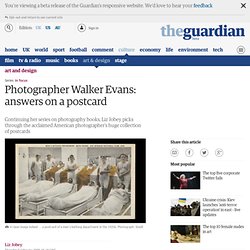 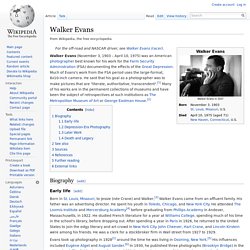 Much of Evans's work from the FSA period uses the large-format, 8x10-inch camera. He said that his goal as a photographer was to make pictures that are "literate, authoritative, transcendent".[1] Many of his works are in the permanent collections of museums and have been the subject of retrospectives at such institutions as The Metropolitan Museum of Art or George Eastman House.[2] Biography[edit] Early life[edit] Born in St. Depression-Era Photography[edit] In 1935, Evans spent two months at first on a fixed-term photographic campaign for the Resettlement Administration (RA) in West Virginia and Pennsylvania. Evans continued to work for the FSA until 1938. Oral history interview with Walker Evans, 1971 Oct. 13-Dec. 23 - Oral Histories. Evans, Walker , b. 1903 d. 1975 Painter Active in New York, N.Y.; New Haven, Conn. 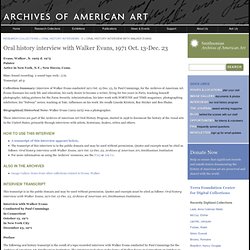