(235) Robert Frank and "The Americans" Ivor Prickett, photojournaliste. Most recently Ivor’s work has focused on the fight to defeat ISIS in Iraq and Syria. 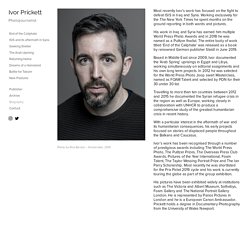 Working exclusively for the The New York Times he spent months on the ground reporting in both words and pictures. His work in Iraq and Syria has earned him multiple World Press Photo Awards and in 2018 he was named as a Pulitzer finalist. The entire body of work titled ‘End of the Caliphate’ was released as a book by renowned German publisher Steidl in June 2019. Based in Middle East since 2009, Ivor documented the 'Arab Spring' uprisings in Egypt and Libya, working simultaneously on editorial assignments and his own long term projects. In 2012 he was selected for the World Press Photo Joop swart Masterclass, named as FOAM Talent and selected by PDN for their 30 under 30 list. With a particular interest in the aftermath of war and its humanitarian consequences, his early projects focused on stories of displaced people throughout the Balkans and Caucasus. 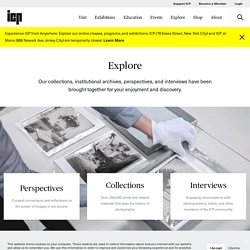 7 People Who Have Changed Photography Forever. Photography as we know it has been shaped by both great photographers and from thinkers who have had the courage to share their creative ideas and take bold risks. 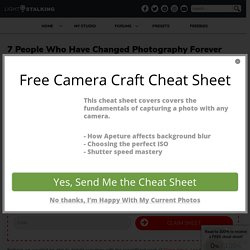 In this article, we'll be covering 7 important figures (among many others that exist) who have influenced photography with their ideas more than with their photographs. John Szarkowski (1925 – 2007) Claim Your Free Camera Craft Cheat Sheet Print it out and keep it for when you really need it - when you're out shooting! Perhaps we wouldn't be able to delight ourselves with the magnificent work of Diane Arbus, Lee Friedlander or Garry Winogrand if it wasn't for John Szarkowski. I really don't know if he was the most influential figure of photography during the twentieth century; but for me he is a big hero.

Roy Stryker (1893 – 1975) Image By John Collier – This image is available from the United States Library of Congress's Prints and Photographs division under the digital ID fsa.8c26323. Masters of Photography. Sony World Photography Awards. Produced by the World Photography Organisation, the internationally acclaimed Sony World Photography Awards are one of the most important fixtures in the photographic calendar. The Awards are a global voice for photography and provide a vital insight into contemporary work today. For both established and emerging artists, the Awards offer extensive exposure. Now in its 14th year, the Awards consist of four competitions: Professional (for photographers entering a body of work or portfolio), Open (for photographers entering a single image), Student (for academic institutions) and Youth (for 12-19 year-olds).

Always free to enter, there is a competition and a category for everyone – from Architecture, Documentary, Landscape, Portraiture, Sport, Street Photography, Wildlife, Travel, Culture and more. 15 Famous Contemporary Photographers and Their Photos. My desire is to preserve the sense of people’s lives, to endow them with the strength and beauty I see in them. 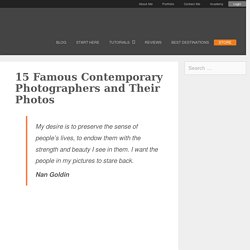 I want the people in my pictures to stare back.Nan Goldin Not everyone can become a great artist; but a great artist can come from anywhere.Anton Ego, Ratatouille Over the past decades, the photographic medium has been redefined and shaped by new emerging technologies as well as new and innovative formats. Perhaps the most important change in relation to this was the appearance of Color Photography, which has a closer equivalent with reality itself. Top 10 Best Photojournalists and Best Documentary Photographers. Post originally authored by Travis Dewitz – Eau Claire Portrait Photographer This is a ridiculous top 10 list of present day documentary photographers and photojournalists. 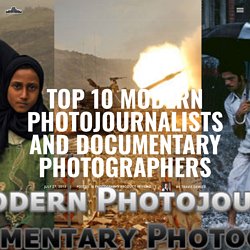 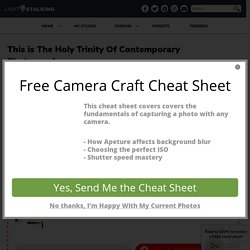