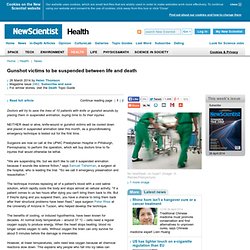 How A Simple New Invention Seals A Gunshot Wound In 15 Seconds. Ultrasound Heals Wounds in 4 Sessions. A new invention about the size of a large Band-Aid delivers low-frequency ultrasound waves to skin wounds to hyper-charge the healing process. 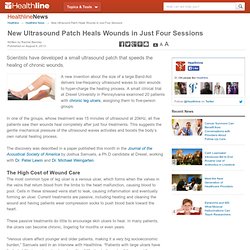 A small clinical trial at Drexel University in Pennsylvania examined 20 patients with chronic leg ulcers, assigning them to five-person groups. In one of the groups, whose treatment was 15 minutes of ultrasound at 20kHz, all five patients saw their wounds heal completely after just four treatments. This suggests the gentle mechanical pressure of the ultrasound waves activates and boosts the body’s own natural healing process. The discovery was described in a paper published this month in the Journal of the Acoustical Society of America by Joshua Samuels, a Ph.D candidate at Drexel, working with Dr.

Peter Lewin and Dr. The High Cost of Wound Care. Clotting Gel to Instantly Seal Wounds. Joe Landolina may not be the next Mark Zuckerberg, but he might have found his billion-dollar idea. 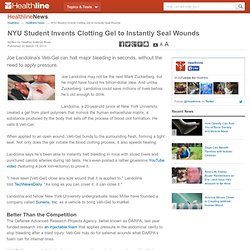 And unlike Zuckerberg, Landolina could save millions of lives before he’s old enough to drink. Bandage Technology. ChitoGauze (Photograph courtesy of HemCon Medical Technologies, Inc.) 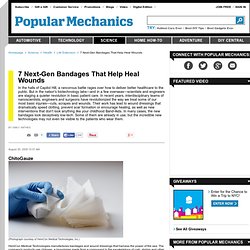 HemCon Medical Technologies manufactures bandages and wound dressings that harness the power of the sea. The company's products use chitosan, a biopolymer made from a component in the exoskeletons of crab, shrimp and other crustacean exoskeletons. The positively charged chitosan attracts the negatively charged outer membranes of red blood cells; when the two come into contact, localized clotting occurs. Bandages Silence Genes. Medical researchers think specially tailored RNA sequences could turn off genes in patients’ cells to encourage wound healing or to kill tumor cells. 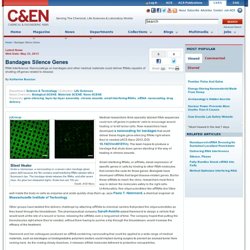 Now researchers have developed a nanocoating for bandages that could deliver these fragile gene-silencing RNAs right where they’re needed ( ACS Nano 2013, DOI: 10.1021/nn401011n ). The team hopes to produce a bandage that shuts down genes standing in the way of healing in chronic wounds. Small interfering RNAs, or siRNAs, derail expression of specific genes in cells by binding to other RNA molecules that contain the code for those genes. Biologists have developed siRNAs that target disease-related genes. Smart bandages use tiny electrodes to monitor bacterial growth in flesh wounds. 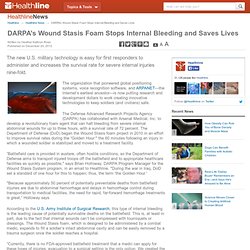 The Defense Advanced Research Projects Agency (DARPA) has collaborated with Arsenal Medical, Inc. to develop a revolutionary foam agent that can halt bleeding from severe internal abdominal wounds for up to three hours, with a survival rate of 72 percent. The Department of Defense (DoD) began the Wound Stasis foam project in 2010 in an effort to improve survival rates during the “Golden Hour:" the 60 minutes following an injury in which a wounded soldier is stabilized and moved to a treatment facility.

According to the U.S. Army Institute of Surgical Research, this type of internal bleeding is the leading cause of potentially survivable deaths on the battlefield. Blood substitute. A blood substitute (also called artificial blood or blood surrogates) is a substance used to mimic and fulfill some functions of biological blood. 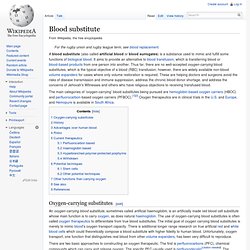 It aims to provide an alternative to blood transfusion, which is transferring blood or blood-based products from one person into another. Thus far, there are no well-accepted oxygen-carrying blood substitutes, which is the typical objective of a blood (RBC) transfusion; however, there are widely available non-blood volume expanders for cases where only volume restoration is required. These are helping doctors and surgeons avoid the risks of disease transmission and immune suppression, address the chronic blood donor shortage, and address the concerns of Jehovah's Witnesses and others who have religious objections to receiving transfused blood. Artificial blood made in Romania. First tests encouraging, researchers say. By Daniel Stroe – Bucharest A team of researchers of the Babes-Bolyai University in Cluj-Napoca, a city in NW Romania, has created a recipe for artificial blood whose preliminary tests have proven encouraging. 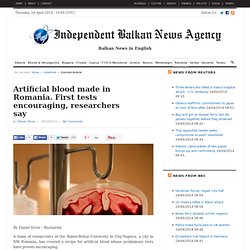 The team led by professor Radu Silaghi-Dumitrescu, who is only 39 years old, has been doing research to create the artificial blood for six years and their discovery could prove crucial given the lack of blood doctors need in cases of severe accidents and major surgeries. The blood is made of water, salt, albumin and a protein – hemerythrin -extracted from marine worms which makes the artificial blood stress resistant. The researchers said the results of the first tests performed on mice are encouraging. How Maggots Heal Wounds. Yes, maggots are creepy, crawly, and slimy. 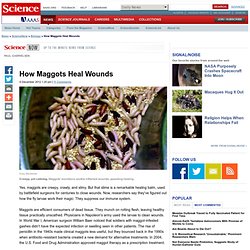 But that slime is a remarkable healing balm, used by battlefield surgeons for centuries to close wounds. Now, researchers say they've figured out how the fly larvae work their magic: They suppress our immune system. Maggots are efficient consumers of dead tissue. They munch on rotting flesh, leaving healthy tissue practically unscathed.