How digital technology is turning cities into theatres. Strong divisions between various transport modes – roads, rail, buses, ferries and so on – have dominated their planning and management for decades, both here in Australia and overseas. 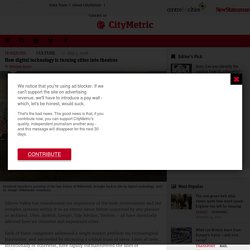 Budgets are often devised and allocated with these transport modes in mind. Whole organisational structures have been created to manage each mode’s infrastructure separately. But how people move around – to and from work, home, or for recreation – involves personal journeys. These are driven by the need to travel, by mobility, and not governed by the mode of travel. As a result, major Australian cities generally suffer from disjointed connections between modes of travel. Thankfully, transport planners have been thinking a lot more about mobility, as emerging and established technologies offer huge potential for change.

All change In New South Wales, Transport for NSW was created to better integrate the various transport agencies and modes. That has huge implications for infrastructure planning. S. Theatre and Technology - The Theatrefolk Blog. Don’t miss out on the downloadable exercise at the end of this article! 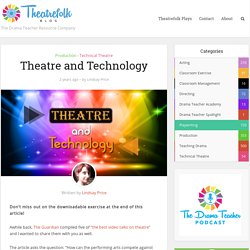 Awhile back, The Guardian compiled five of “the best video talks on theatre” and I wanted to share them with you as well. The article asks the question: “How can the performing arts compete against technology?” I wonder if that’s the right question to ask. In fact, it seems pretty odd to me because “compete” is really the wrong word. Theatre competing against technology, who would win that fight? My bias may be with the elder statesman, except for the fact that I love the technological world we live in today.

About Unlimited Theatre. We are storytellers and we want to change the world (even a little bit) for the better. 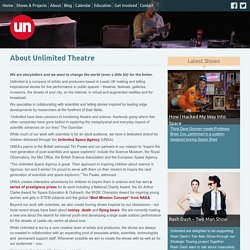 Unlimited is a company of artists and producers based in Leeds UK making and telling inspirational stories for live performance in public spaces – theatres, festivals, galleries, museums, the streets of your city, on the internet, in virtual and augmented realities and for broadcast. We specialise in collaborating with scientists and telling stories inspired by leading edge developments by researchers at the forefront of their fields. “Unlimited have been pioneers in combining theatre and science, fearlessly going where few other companies have gone before in exploring the metaphysical and everyday impact of scientific advances on our lives” The Guardian While much of our work with scientists is for an adult audience, we have a dedicated strand for children delivered through the Unlimited Space Agency (UNSA). “The Unlimited Space Agency is great.

Welcome to the shows. Core Artists… Welcome to the show. The Festival of Curiosity » Dublin's International Festival of Science, Art &amp; Curious Technology. July 23 -26, 2015. Theatre Sandbox - making space for great ideas. Theatre Sandbox, a new opportunity for theatre artists, companies and collectives, is offering six £10,000 commissions to support the research and development of experimental pieces of performance which engage with Pervasive Media Technologies.What are we looking for? 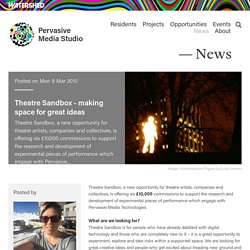 Theatre Sandbox is for people who have already dabbled with digital technology and those who are completely new to it – it is a great opportunity to experiment, explore and take risks within a supported space. We are looking for great creative ideas and people who get excited about treading new ground and sharing their learning with others. What is Pervasive Media? Pervasive Media is any experience that uses sensors and mobile/wireless networks to deliver content (film, audio, music, images, a game…) that is sensitive to your situation – which could be where you are, how you feel, or who you are with. Digital Drama: The technology transforming theatre. "Vidiots, they sometimes call us," admits Timothy Bird. 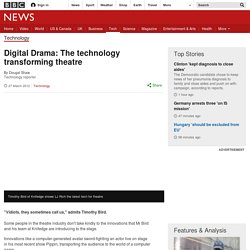 Some people in the theatre industry don't take kindly to the innovations that Mr Bird and his team at Knifedge are introducing to the stage. Innovations like a computer-generated avatar sword-fighting an actor live on stage in his most recent show Pippin, transporting the audience to the world of a computer game. Or the sight of a Seurat painting gradually coming to life on stage in Sunday in the Park with George, the show which cemented Knifedge's reputation with an Olivier award for Best Set Design in 2007. Impressive feats like these by Mr Bird and others like him have meant that in the last five years the role of "video designer" has become increasingly common in theatrical programme credits - a term hardly known a decade ago.

Culture shock: The best artistic stories that science has to tell. Thousands of years ago people made up stories to explain the world. 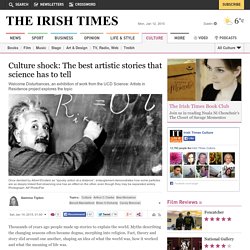 Myths describing the changing seasons often became dogma, morphing into religion. Fact, theory and story slid around one another, shaping an idea of what the world was, how it worked and what the meaning of life was. Natasha Tsakos: A multimedia theatrical adventure. Innovative Theatrical Experiences & Technology. A new stage age: why theatres should embrace digital technology. Facing the future ... Unlimited's The Moon, the Moon, which invites online public participation.