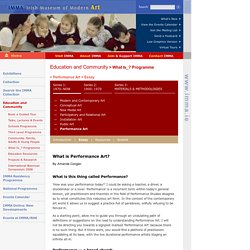 'How was your performance today? ' I could be asking a teacher, a driver, a stockbroker or a lover. 'Performance' is a recurrent term within today's general lexicon, yet practitioners and theorists in the field of Performance Studies disagree as to what constitutes this nebulous art form. In the context of the contemporary art world it allows us to suggest a practice full of paradoxes, wilfully refusing to be fenced in. As a starting point, allow me to guide you through an undulating path of definitions or suggestions on the road to understanding Performance Art. Performance — a broad church Performance is an 'essentially contested concept'.1 Practitioners and theorists occupy this space of disagreement, allowing the field to unfold and incorporate a multitude of practices.

Indeed, Performance Art cannot be said to stem from any one particular discipline: theatre, dance or the visual arts. Body — Site — Audience — Time The Audience. She’s back! Drag queen gets standing ovation for speech about homophobia · PinkNews. Irish drag artist Panti Bliss has delivered a jaw-dropping follow-up to her viral speech about homophobia. 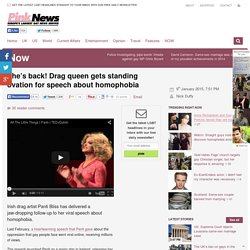 Last February, a heartwarming speech that Panti gave about the oppression that gay people face went viral online, receiving millions of views. The speech launched Panti as a major star in Ireland, releasing her own autobiography and even being sampled as part of a Pet Shop Boys track. Almost a year on, a follow-up speech that Panti gave as part of TedX Dublin has been released. The drag queen is just as honest as ever in the new clip, which sees her discuss the internal conflicts that gay people face around intimacy.

Panti says: “I am 45 years old, and I have never once unselfconsciously held hands with a lover in public. “I don’t know how many of you can even imagine what that might be like. “Every day, I am jealous of straight people, because that tiny intimate expression of affection has never once been mine. “We look around to see where are we, who’s around, what kind of area is it? Ask A Dublin Drag - Panti. Panti Unstitched. Here’s an interview I did with Rory O’Neill aka Panti as All Dolled Up Restitched takes over the Peacock Stage at the Abbey Theatre. 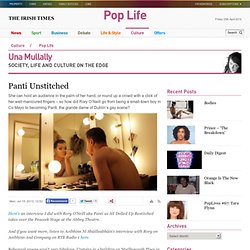 And if you want more, listen to Aoibhinn Ní Shúilleabháin’s interview with Rory on Aoibhinn And Company on RTE Radio 1 here. Rehearsal spaces aren’t very fabulous. Upstairs in a building on Marlborough Place in Dublin, next door to Barney’s Amusements and a glance away from the Abbey in an area busy with daytime drug dealers, All Dolled Up Restitched is undergoing a read-through, with Jennifer Jennings and Phillip McMahon, of the company Thisispopbaby, at the helm. Rory O’Neill arrives, makes a cup of tea, brushes the crumbs of a croissant away, and sits at a table with a clutch of Abbey staff.

He settles into one of the first lines of the script: “Let me start by asking you a question. These are Pandora Panti Bliss’s words. When Panti or O’Neill talks, the gay scene listens. The summer before his final year of art school, O’Neill moved to London. “The country needed to have that conversation” – Panti returns to the Saturday Night Show. Image: RTE Player DUBLIN DRAG QUEEN Panti Bliss says she is attempting to ‘draw a line’ under the Pantigate incident which saw her propelled into the spotlight after an appearance on the Saturday Night Show earlier this year. 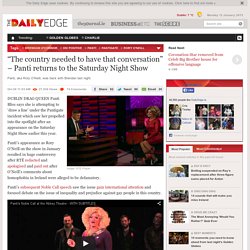 Panti’s appearance as Rory O’Neill on the show in January resulted in huge controversy after RTÉ redacted and apologised and paid out after O’Neill’s comments about homophobia in Ireland were alleged to be defamatory. Panti’s subsequent Noble Call speech saw the issue gain international attention and focused debate on the issue of inequality and prejudice against gay people in this country.

Video ( Opening last night’s interview Panti said she was appearing as herself as a mark of moving on from the controversy, while quipping: It feels like it’s only been five lawyers since I saw you last. She called the “kerfuffle” and the immediate aftermath “stressful and upsetting and weird” but that over time it turned into a good thing, not just for her but for the country.