Lady Godiva. Godiva (/ɡəˈdaɪvə/; Old English: Godgifu[1]), known as Lady Godiva, was an 11th-century Anglo-Saxon noblewoman who, according to a legend dating back at least to the 13th century, rode naked through the streets of Coventry in order to gain a remission of the oppressive taxation imposed by her husband on his tenants. 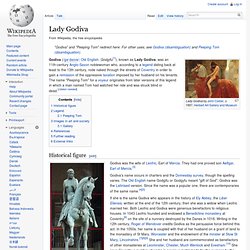 The name "Peeping Tom" for a voyeur originates from later versions of this legend in which a man named Tom had watched her ride and was struck blind or dead. [citation needed] Historical figure[edit] Lady Godiva statue by Sir William Reid Dick unveiled at midday on 22 October 1949 in Broadgate, Coventry, a £20,000 gift from Mr W. H. Godiva was the wife of Leofric, Earl of Mercia. Godiva's name occurs in charters and the Domesday survey, though the spelling varies. After Leofric's death in 1057, his widow lived on until sometime between the Norman Conquest of 1066 and 1086. The place where Godiva was buried has been a matter of debate. 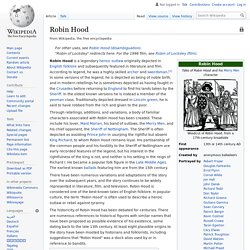 Although such behaviour was not part of his original character, since the beginning of the 19th century[1] he has become known for "robbing from the rich and giving to the poor",[2] assisted by a group of fellow outlaws known as his "Merry Men".[3] Traditionally, Robin Hood and his men are depicted wearing Lincoln green clothes.[4] The origin of the legend is asserted by some to have been actual outlaws, or ballads or tales of outlaws.[5] History[edit] In popular culture, Robin Hood and his band of "merry men" are usually portrayed as living in Sherwood Forest, in Nottinghamshire, where much of the action in the early ballads takes place.[7] So does the very first recorded Robin Hood song, four lines from the early 15th century, beginning: "Robyn hode in scherewode stod.

Early references[edit] Lytil Jhon and Robyne Hude. Countess Godiva. Countess Godiva Lady Godiva by John Collier A legend is a valuable asset to any location, over the years attracting many pilgrims, visitors and tourists to the area associated with it; one has only to think of legendary figures like Robin Hood or King Arthur. 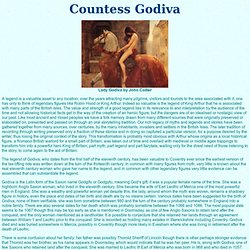 Indeed so valuable is the legend of King Arthur that he is associated with many parts of the British Isles. The value and strength of a good legend lies in its relevance to and interpretation by the audience of the time and not allowing historical facts get in the way of the creation of an heroic figure, but the dangers are of an idealised or nostalgic view of our past.

Like most ancient and mixed peoples we have a folk memory drawn from many different sources that were originally preserved or elaborated on, presented and passed on through an oral storytelling tradition. Godiva is the Latin form of the Saxon name Godgifu or Godgyfu, meaning God’s gift; it was a popular female name of the time. Anglo Saxon house. Middle Ages - Medieval Resources. Medieval Japan. Facsimile books. Medieval Sourcebook. Update Information 2006: In 2006 the Internet Medieval Sourcebooks and associated sourcebooks are undergoing a major overhaul to remove bad links and add more documents. 2. This project is both very large and fairly old in Internet terms. At the time it was instigated (1996), it was not clear that web sites [and the documents made available there] would often turn out to be transient.

As a result there is a process called "link rot" - which means that a "broken link" is a result of someone having taken down a web page. 2. 3. Note: This site aims to present medieval sources. Sourcebook Contents The Internet Medieval Sourcebook is organized as three main index pages, with a number of supplementary documents. Selected Sources This is the main entry to the resources here. Full Text Sources Full texts of medieval sources arranged according to type.