Were Russia's tsars the nastiest royals in history? By Simon Sebag Montefiore (Weidenfeld & Nicolson £25) As we know from the stupendous BBC adaptation of Tolstoy's epic novel, War And Peace, the Russians are very good at war, not so pie-hot when it comes to peace. 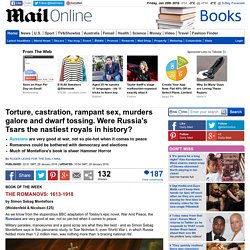 Military parades, manoeuvres and a good scrap are what they like best - and as Simon Sebag Montefiore says in this panoramic study, to Tsar Nicholas II, even World War I, in which Russia fielded more than 1.2 million men, was nothing more than 'a bracing national rite'. Tsar Alexei, who came to the throne in 1645, was a religious maniac, who awoke at 4am to pray His ancestor, Nicholas I, devoted his time to designing uniforms, the gold-epauletted black jackets and shiny boots. Nicholas's brother, Alexander I, so relished his confrontations with Napoleon that, despite the battlefields of Austerlitz and Borodino being the 'most gorgeously dressed abattoirs in history', he still wanted to form an alliance with the French and invade British India.

Loaded: 0% The Many Lives of Maria Rasputin, Daughter of the 'Mad Monk' Maria Rasputin as an animal trainer at a London circus in 1934. 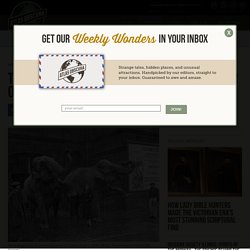 (Photo: Planet News Archive/Getty Images) I was born in 1899 in the village of Pokrovskoe in the county of Tobolsk. My parents are peasants, simple people. Our family consists of: father, mother, grandfather (my father's father), my brother, sister and myself. We all live happily together but sometimes I get cross with my brother and sister, but with my sister I get cross all the time. Maria Grigorievna Rasputin wrote the simple words above as a young teenager in unpublished diaries. Maria spent her early childhood in a relatively well-off family of peasants.

Rasputin pictures show monk who brought down the Tsar in COLOUR. Chilling colour pictures of the notorious faith healer Rasputin have emerged showing him with the Russian TsarOthers are portraits revealing his hypnotic and terrifying gaze, taken prior to his shooting and drowning in 1916Rasputin is famous for having astonishing influence over the Russian leadership prior to the Bolshevik revolutionHe won over the Tsarina, who was prepared to do almost anything in her belief he could help her haemophiliac son By Corey Charlton for MailOnline Published: 12:15 GMT, 21 November 2015 | Updated: 22:13 GMT, 21 November 2015. 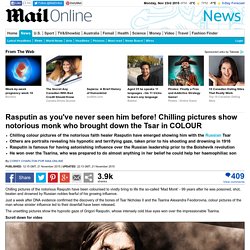 15 intimate snapshots of the Romanov family, shortly before their execution. Bones discovered in Russian mine are those of Tsar Nicholas II and his wife. New DNA tests comparing the exhumed bones of Russia's tragic last tsar to known royal bloodstains have proved beyond doubt Samples taken from descendants of Britain's Queen Victoria genetically match the lower jaw of his controversial German-born empress Alexandra Russian Orthodox Church questioned whether previous tests were sound. 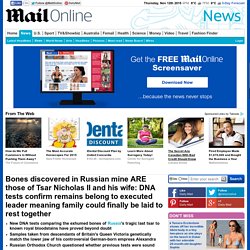 The Man Who Saved the World feature. 1907-1915: Russia Before the Revolution, in Color. Russian Revolution. Russia photos: From woodsmen and tramps to soldiers of the Revolution, remarkable photos of a changing nation. Pictures taken by Maxim Dmitriev - one of the founders of the photojournalism genreAmong images: White army general, marketplaces and 'Old Believers'Many show scenes in cities along the Volga river By Nick Enoch Published: 13:51 GMT, 11 February 2013 | Updated: 18:03 GMT, 11 February 2013 A pair of weather-beaten woodsmen stare at a camera as they lean against a log pile in the bitter cold; in another image, a general resplendent in his military regalia strikes a pose. 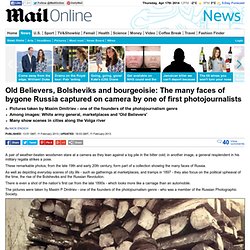 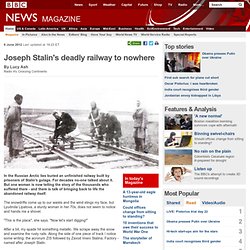 For decades no-one talked about it. But one woman is now telling the story of the thousands who suffered there - and there is talk of bringing back to life the abandoned railway itself. The snowdrifts come up to our waists and the wind stings my face, but Lyudmila Lipatova, a sturdy woman in her 70s, does not seem to notice and hands me a shovel. "This is the place", she says. After a bit, my spade hit something metallic. Solzhenitsyn's One Day: The book that shook the USSR. 19 November 2012Last updated at 19:16 ET By Steve Rosenberg BBC News, Moscow One Day in the Life of Ivan Denisovich, Alexander Solzhenitsyn's classic novel, was published 50 years ago this month. 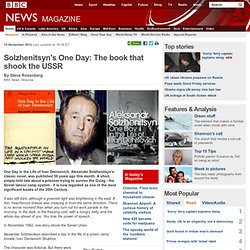 A short, simply-told tale about a prisoner trying to survive the Gulag - the Soviet labour camp system - it is now regarded as one of the most significant books of the 20th Century. It was still dark, although a greenish light was brightening in the east. A thin, treacherous breeze was creeping in from the same direction. There is no worse moment than when you turn out for work parade in the morning. 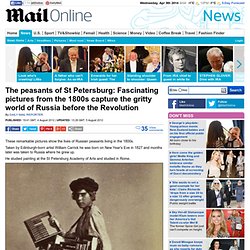 Taken by Edinburgh-born artist William Carrick he was born on New Year's Eve in 1827 and months later was taken to Russia where he grew up. He studied painting at the St Petersburg Academy of Arts and studied in Rome. William Carrick took a picture of this abacus seller in his St Petersburg studio in Russia. Carrick was born on New Year's Eve in 1827 and later moved to Russia with his family. Incredible Photos of Russian Peasants in the 1800s. Russian peasants were a completely separate class from the land owners and nobility, many of whom must have considered their underlings less than human. 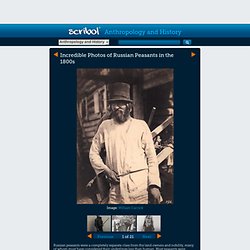 Most peasants were actually serfs – individuals owned by or legally tied to their masters – before The Peasant Reform of 1861. The first major liberal reform in Russia, it freed serfs to marry without consent and to own businesses and property. About 23 million people were affected. Yet life was still tough for the peasants. They made their living working the land or were employed in unskilled jobs. The character pictured here looks a bit like a butcher – and a scary one at that – or else he brings to mind the popular image of Fagin in Dickens’ Oliver Twist. Michele Collet Scribol Staff. Nicholas II Coronation Photographs.

Extremely rare photo album with 16 original photographs of Coronation procession , taken on May 14th 1896 in Moscow. 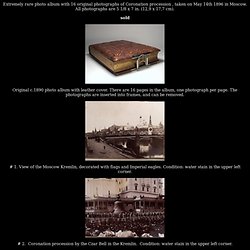 In February 1917, Tsar Nicholas II abdicated, and a representative Provisional Government succeeded the autocracy. In October, the Bolsheviks, led by Vladimir Lenin, overthrew the Provisional Government. They would go on to establish the world's first socialist state and attempt to spread socialist revolution around the world. In so doing, they issued a strong ideological challenge to the capitalist world. Through the Russian Revolution; illustrated wit...