ANZAC Day Research Relay - Learn From Play. Rachel McCann | March 29, 2021 Held annually on April 25th ANZAC Day is a national day of remembrance for those who have served in wars, conflicts and peacekeeping operations. 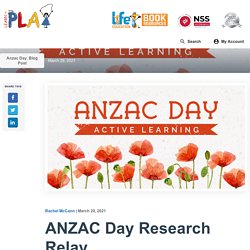 Services are held to honour those who helped and continue to help keep Australia a free nation. This activity does not take anything away from the solemnity that is ANZAC Day but provides a fun method for ensuring students know why they attend ANZAC Day services. This activity is designed to be conducted with Year 5 or 6 students in the lead up to ANZAC Day and could be used as a stand-alone lesson or as an introduction or culmination to the ANZAC Day unit in the Teaching Resources Section of Learn From Play. It is designed to make researching fun for students while also fostering the ANZAC spirit of working together, fighting to win and not giving up in the face of adversity.

World War II veterans reflect on Anzac Day: In Their Own Words - Anzac Portal. Anzac Day: Wartime Snapshot No. 30 - Anzac Portal. They shall grow not old, as we that are left grow old; Age shall not weary them, nor the years condemn. 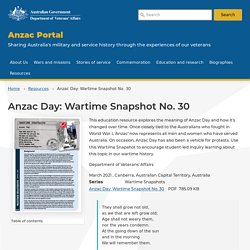 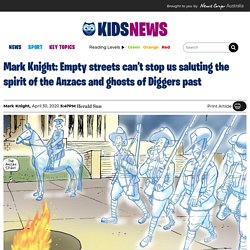 We are all facing many changes to our lifestyle and routines in these times of COVID-19. Social distancing, staying at home, remote learning (hope you’re all going okay with that!) , and the cancellation of sports and major events. Anzac Day 2020 Dawn Service. This Anzac Day will look very different. But the reasons why we remember remain the same. Opinion By Governor-General David Hurley Posted about 4 hours agoFri 24 Apr 2020, 9:00pm Throughout their history, the men and women of the Australian Defence Force have had a role to assist our own communities, and those of our neighbours, in times of natural disasters. 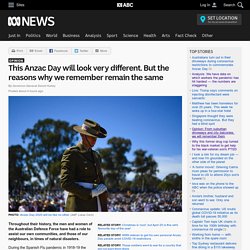 During the Spanish Flu pandemic in 1918-19 the Pacific nations of Fiji, Tonga and Samoa were very badly afflicted. Leaders mark Anzac Day 2020 at War Memorial as Australians pay respects from home amid coronavirus lockdown. Updated 17 minutes agoSat 25 Apr 2020, 1:16am The national Anzac Day ceremony has been watched by thousands this morning — broadcast from the Australian War Memorial in Canberra, as people stay home amid coronavirus restrictions. 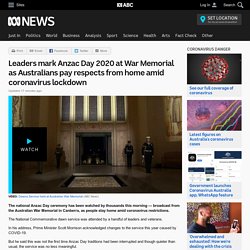 The National Commemorative dawn service was attended by a handful of leaders and veterans. Alec Campbell interviewed by Peter Saxon for the 100 centenarians, the children of federation oral h... [nla.obj-207524331] Please read the following terms and conditions carefully and be aware You will have obligations, including the duty to observe the legal and moral rights of the person who provided the oral history, and of the Library. 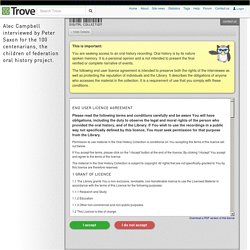 If You wish to use the recordings in a public way not specifically defined by this licence, You must seek permission for that purpose from the Library. » Helles Memorial and Indian Soldiers. India played a significant part in World War One. 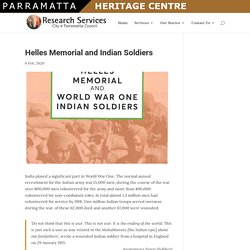 The normal annual recruitment for the Indian army was 15,000 men, during the course of the war over 800,000 men volunteered for the army and more than 400,000 volunteered for non-combatant roles. In total almost 1.3 million men had volunteered for service by 1918. One million Indian troops served overseas during the war, of these 62,000 died and another 67,000 were wounded. Milo profile. How WWI affected small towns in Australia. Anzac Day: Honouring our WWII heroes we’ll never forget. ON Anzac Day, a small, hunched figure in a wheelchair will lead the 7th Division down George Street. 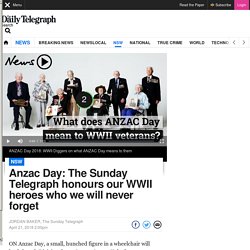 Kokoda veteran Dick Payten is 97, but his age will never stop him honouring his fallen mates. “I will remember them until I die,” he said. Daphne Dunne will remember, too. Search Museums Victoria's collections. Photograph - 'Extreme Right of Anzac', Gallipoli, Turkey, Private John Lord, World War I, 1915. Summary Black and white photographic print. 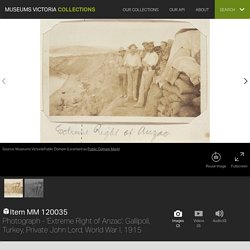 Attached to a small notebook used as a photograph album, containing 55 black and white photographs of ANZAC soldiers in Egypt, Mudros and Gallipoli during World War I. The photographs were taken by an Australian soldier, Sergeant John Lord or one of his friends (to be verified). John Lord served in the 13th Field Ambulance and returned to Australia shortly after the end of the War in 1919. The album was one of many souvenirs brought back to Australia after World War I by Lord. The Story of WWI: 06/11/2018, Behind the News. Let's go back to find out what caused World War I in the first place. 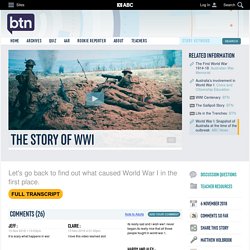 It was a war that changed the world forever. But it may never have started, had it not been for this guy, Gavrilo Princip. On June 28, 1914, he assassinated Archduke Franz Ferdinand, of Austria, and it started a massive chain reaction. Austria declared war on Serbia. History of two-up and how the tradition has changed since war years. Posted Wed at 10:02pmWed 24 Apr 2019, 10:02pm It is a game that is synonymous with Anzac Day — and with good reason. In most parts of Australia, two-up — or Swy, as it's sometimes called — is illegal on every day of the year except the anniversary of the Gallipoli campaign.

The game of two-up is synonymous with Australian soldiers, but was not invented by themIt was the game of choice for returned servicemen in the post-war years and later picked up by minersTwo-up become a pastime on Anzac Day where it recognises the Australian diggers' spirit On that one day though, it has become a tradition to hit the local RSL or pub and watch the coins get tossed in the air, as a nod to the ex-servicemen who played the same game decades earlier. Two up and the war experience. Respect the Day, Anzac Day, 2019, Remember Their Sacrifice, Honour Our Traditions, Look After Your Mates, Celebrate Our Freedoms. Respect the Day is a campaign to remind people of the special significance of ANZAC Day and to encourage Australians to reflect on how we should behave on this sacred day.

A Very Special Day. The Anzac Day Tradition. During the 1920s Anzac Day became established as a national day of commemoration for the more than 60,000 Australians who had died during the war. In 1927, for the first time, every state observed some form of public holiday on Anzac Day. By the mid-1930s all the rituals we now associate with the day – dawn vigils, marches, memorial services, reunions, two-up games – were firmly established as part of Anzac Day culture. Later, Anzac Day also served to commemorate the lives of Australians who died in the Second World War, and in subsequent years the meaning of the day has been further broadened to include those who lost their lives in all the military and peacekeeping operations in which Australia has been involved. Anzac Day was first commemorated at the Memorial in 1942.

At the time, government orders prohibited large public gatherings in case of a Japanese air attack, so it was a small occasion with neither a march nor a memorial service. Anzac Centenary Special - Campaigns - Behind The News - BTN. ABC Untold Stories From Australian WWI Memorials. To save media items to your favourites, please sign in to ABC Education using your ABC account.

I'm under 13 I'm 13 or over You can organise your favourites into folders, or use them to create playlists. Kids News explainer: What is Anzac Day, what happens at the Dawn Service and how will 2020 be different? WHAT IS ANZAC DAY? Anzac Day, on April 25 each year, is an Australian and New Zealand national day of remembrance* for Australians and New Zealanders at home and around the world. Before the Anzac biscuit, soldiers ate a tile so hard you could write on it. Updated about 6 hours agoWed 24 Apr 2019, 8:52am Before Anzac biscuits found the sticky sweet form we bake and eat today, Anzac soldiers ate durable but bland "Anzac tiles", a new name for an ancient ration. Anzac tiles are also known as army biscuits, ship's biscuits, or hard tack. A variety of homemade sweet biscuits sent to soldiers during the first world war may have been referred to as "Anzac biscuits" to distinguish them from "Anzac tiles" on the battlefield.

Rations and care package treats alike can be found in museum collections, often classified as 'heraldry' alongside medals and uniforms. They sometimes served novel purposes: Sergeant Cecil Robert Christmas wrote a Christmas card from Gallipoli on a hard tack biscuit in 1915. The back of the biscuit reads 'M[erry] Christ[mas] [Illegible] / Prosperous New Y[ear] / from Old friends / Anzac / Gallipoli 1915 / [P]te C.R. Biscuit as stationery This Anzac tile was made in Melbourne. A tin sealed with sadness. Learn how to make the perfect Anzac biscuit with CWA secretary and baking judge Pam Wright. Anzac biscuit recipes. The origins of Anzac Day. ANZAC Philip Ayton’s Gallipoli diary. Philip Owen Ayton was 25 years old and working on the Sydney tramways when he enlisted* in the 1st Field Company of Engineers soon after World War I was declared. He took part in the Gallipoli landing and later fought on the Western Front, all described in vivid* detail in a diary of about 106,000 words.