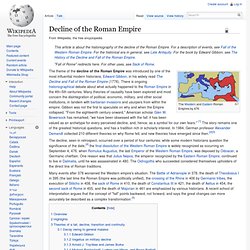 There is ongoing historiographical debate about what actually happened to the Roman Empire in the 4th–5th centuries. Many theories of causality have been explored and most concern the disintegration of political, economic, military, and other social institutions, in tandem with barbarian invasions and usurpers from within the empire. Gibbon was not the first to speculate on why and when the Empire collapsed. "From the eighteenth century onward," American scholar Glen W. Bowersock has remarked, "we have been obsessed with the fall: it has been valued as an archetype for every perceived decline, and, hence, as a symbol for our own fears. " [1] The story remains one of the greatest historical questions, and has a tradition rich in scholarly interest. Overview Highlights 3rd century 4th century. Timeline of the Middle Ages. Note: All dates are Common Era. 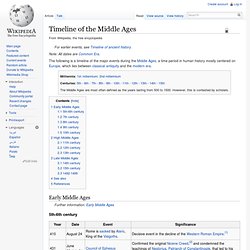 High Middle ages. Late Middle ages. Dark Ages (historiography) The Dark Ages is a historical periodization used originally for the Middle Ages, which emphasizes the cultural and economic deterioration that supposedly occurred in Western Europe following the decline of the Roman Empire.[1][2] The label employs traditional light-versus-darkness imagery to contrast the "darkness" of the period with earlier and later periods of "light".[3] The period is characterized by a relative scarcity of historical and other written records at least for some areas of Europe, rendering it obscure to historians. 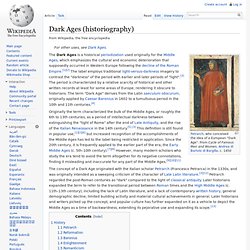 The term "Dark Age" derives from the Latin saeculum obscurum, originally applied by Caesar Baronius in 1602 to a tumultuous period in the 10th and 11th centuries.[4] The term "Dark Ages" originally was intended to denote the entire period between the fall of Rome and the Renaissance; the term "Middle Ages" has a similar motivation, implying an intermediate period between Classical Antiquity and the Modern era.

Middle Ages. In European history, the Middle Ages, or Medieval period, lasted from the 5th to the 15th century. 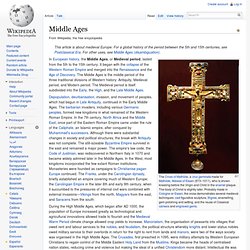 It began with the collapse of the Western Roman Empire and merged into the Renaissance and the Age of Discovery. The Middle Ages is the middle period of the three traditional divisions of Western history: Antiquity, Medieval period, and Modern period. The Medieval period is itself subdivided into the Early, the High, and the Late Middle Ages. Depopulation, deurbanisation, invasion, and movement of peoples, which had begun in Late Antiquity, continued in the Early Middle Ages. The barbarian invaders, including various Germanic peoples, formed new kingdoms in what remained of the Western Roman Empire. During the High Middle Ages, which began after AD 1000, the population of Europe increased greatly as technological and agricultural innovations allowed trade to flourish and the Medieval Warm Period climate change allowed crop yields to increase.