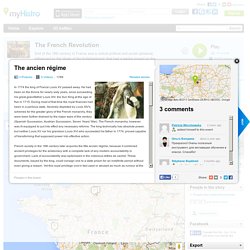 He had been on the throne for nearly sixty years, since succeeding his great-grandfather Louis XIV, the Sun King at the age of five in 1715. During most of that time the royal finances had been in a perilous state. Severely depleted by Louis XIV's schemes for the greater glory of the French monarchy, they were been further drained by the major wars of the century (Spanish Succession, Austrian Succession, Seven Years' War).

The French monarchy, however, was ill-equipped to put into effect any necessary reforms. The king technically has absolute power, but neither Louis XV nor his grandson Louis XVI who succeeded his father in 1774, proved capable of transforming that supposed power into effective action. French society in the 18th century later acquires the title ancien régime, because it combined ancient privileges for the aristocracy with a complete lack of any modern accountability in government. For Education. My TimeRime. Google Maps. Launch Google MapsLaunch Maps in LUNA Browser The over 120 historical maps in the Google Maps have been selected by David Rumsey from his collection of more than 150,000 historical maps; in addition, there are a few maps from collections with which he collaborates. 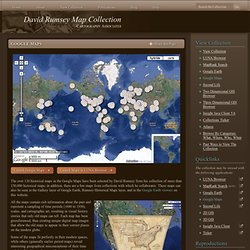 These maps can also be seen in the Gallery layer of Google Earth, Rumsey Historical Maps layer, and in the Google Earth viewers on this website. All the maps contain rich information about the past and represent a sampling of time periods (1680 to 1930), scales, and cartographic art, resulting in visual history stories that only old maps can tell. Each map has been georeferenced, thus creating unique digital map images that allow the old maps to appear in their correct places on the modern globe. The original historical maps are first made into digital images by scanning them with high resolution digital cameras. Processing and hosting of the Rumsey Historical Maps in Google Maps is provided by Geogarage. 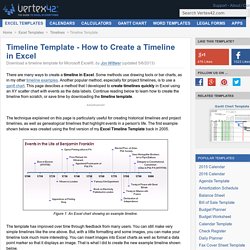 Some methods use drawing tools or bar charts, as in my other timeline examples. Another popular method, especially for project timelines, is to use a gantt chart. This page descibes a method that I developed to create timelines quickly in Excel using an XY scatter chart with events as the data labels. Continue reading below to learn how to create the timeline from scratch, or save time by downloading the timeline template.

Advertisement The technique explained on this page is particularly useful for creating historical timelines and project timelines, as well as genealogical timelines that highlight events in a person's life. Figure 1: An Excel chart showing an example timeline. The template has improved over time through feedback from many users. Figure 2: Timeline with images and a little formatting. If you want to start creating your own timelines right away, you can download the Excel timeline template. Student Materials: Timeline. Greece timeline. A chronology of key events: 1924 - Greeks vote for abolition of the monarchy, country becomes republic. 1935 - Monarchy restored. 1936 - General Metaxas appointed prime minister by king, establishes right-wing dictatorship. 1940 - Mussolini's forces attack Greece from Italian-held Albania, but are repelled. 1941 - Metaxas dies. 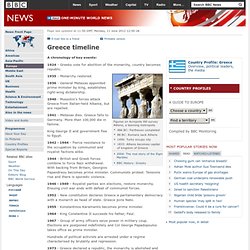 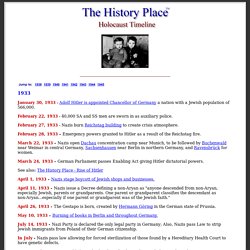 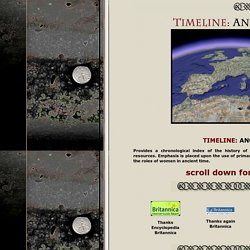 Emphasis is placed upon the use of primary source material, numismatics, and a focus upon the roles of women in ancient time. scroll down for the timeline Thank you for visiting! Timeline Menu Ridley Scott's GLADIATOR is a great film. Is it great history? Click here to learn the real story behind the events and characters portrayed in the movie. Kindly report any suggestions, problems, errors, or dead links by emailing david(at)exovedate.com Using info from this site? For detailed copyright information and bibliographic citation, click here contact the author by emailing david(at)exovedate.com (note: replace (at) with the @ symbol) Copyright © David Neelin: All Rights Reserved c. 2nd Millennium BCE || Archeological Remains.