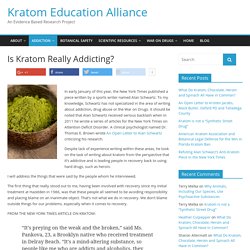 To my knowledge, Schwartz has not specialized in the area of writing about addiction, drug abuse or the War on Drugs. It should be noted that Alan Schwartz received serious backlash when in 2011 he wrote a series of articles for the New York Times on Attention Deficit Disorder. A clinical psychologist named Dr. Thomas E. Brown wrote An Open Letter to Alan Schwartz criticizing his research. Despite lack of experience writing within these areas, he took on the task of writing about kratom from the perspective that it’s addictive and is leading people in recovery back to using hard drugs, such as heroin. I will address the things that were said by the people whom he interviewed. Chances are, if you’ve been to enough AA or NA meetings, you’ve heard the phrase, “I am responsible.” Unfortunately, Ms. As I have stated before, I am a recovering addict. Further reading: The 6 Commandments Of Kratom Storage - Kratom And Kratom Extracts. Kratom Storage: Powder and Leaves If you are like I am, bringing home bulk kratom from your nearby health shop or buying it online to reduce costs is a fun way to try as many kratom varieties as possible, but when thinking of how to store kratom the appropriate way, what actually works effectively in preserving your kratom fresh and potent? 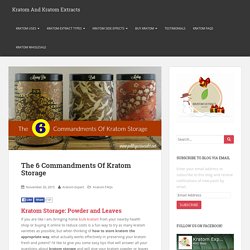 I’d like to give you some easy tips that will answer all your questions about kratom storage and will give your kratom powder or leaves the ideal living conditions for maximum potency. Storing kratom can be very easy. If you really keep your kratom in an hermetic container and after that you store your container in a cool, dark, dry place protected from strong scents, you will probably have finished it before you start noticing any degradation in potency. Looking a tiny bit closer into kratom storage unveils some more intricacy and in this post, I will explain it to you. 1. Heat exposition can rapidly spoil good kratom. 2. Kratom: The Miracle Healing Leaf. 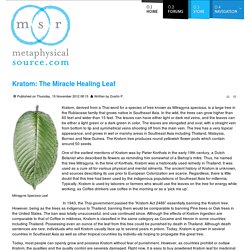 Mitragyne Speciosa Leaf Kratom, derived from a Thai word for a species of tree known as Mitragyna speciosa, is a large tree in the Rubiaceae family that grows native in Southeast Asia. In the wild, the trees can grow higher than 60 feet and wider than 15 feet. One of the earliest mentions of Kratom was by Pieter Korthals in the early 19th century, a Dutch Botanist who described its flowers as reminding him somewhat of a Bishop's mitre. In 1943, the Thai government passed the "Kratom Act 2486" essentially banning the Kratom tree.

Today, most people can openly grow and possess Kratom without fear of punishment. The Kratom leaf is usually traditionally chewed, dried and powdered and then mixed with foods, or boiled into a tea. Kratom is used around the world today and it is usually sold in herbal shops, alternative medicine stores and also on the internet. Kratom is compared to coffee in many ways. (Nelsen JL, 2010) Login. Your Premier Source for bulk Kratom and various beneficial herbs! MAENG DA Ultra Premium Powder - MoodandMind.com. Is Kratom Connoisseurs The Best Kratom Forum? Loading ... 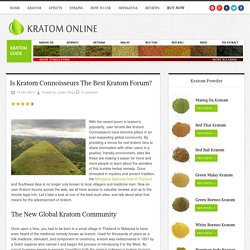 With the recent boom in kratom’s popularity, user forums like Kratom Connoisseurs have become pillars in an ever-expanding global community. By providing a venue for real kratom fans to share information with other users in a positive, friendly environment, sites like these are making it easier for more and more people to learn about the wonders of this humble herbal remedy. Once shrouded in mystery and ancient tradition, the Mitragyna Speciosa tree of Thailand and Southeast Asia is no longer only known to local villagers and medicine men.

Now on user Kratom forums across the web, we all have access to valuable reviews and up to the minute legal info. Let’s take a look at one of the best such sites, and talk about what that means for the advancement of kratom. The New Global Kratom Community Once upon a time, you had to be born in a small village in Thailand or Malaysia to have even heard of the medicinal remedy known as kratom. The Importance of Participation.