Zimec Zambia 2014. The Big Give. Need Children who cannot afford a school uniform and shoes are not permitted to attend the government schools. 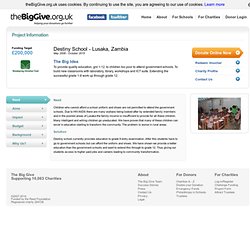 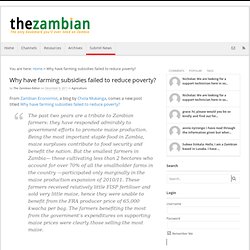 Hydrovolts. Hydrovolts was founded in 2007 as a result of the founders directing a study examining the hydrokinetic potential of tidal systems in the Pacific Northwest. 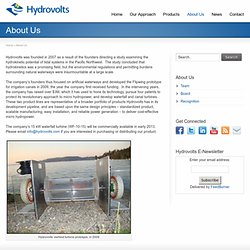 The study concluded that hydrokinetics was a promising field, but the environmental regulations and permitting burdens surrounding natural waterways were insurmountable at a large scale. The company’s founders thus focused on artificial waterways and developed the Flipwing prototype for irrigation canals in 2009, the year the company first received funding. In the intervening years, the company has raised over $3M, which it has used to hone its technology, pursue four patents to protect its revolutionary approach to micro hydropower, and develop waterfall and canal turbines.

The company’s 15 kW waterfall turbine (WF-10-15) will be commercially available in early 2013. Please email info@hydrovolts.com if you are interested in purchasing or distributing our product. DDoS Attacks Spread Beyond Banking. U.S. 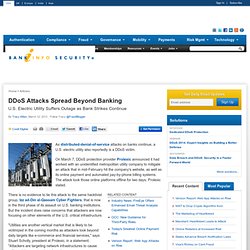 Electric Utility Suffers Outage as Bank Strikes Continue As distributed-denial-of-service attacks on banks continue, a U.S. electric utility also reportedly is a DDoS victim. On March 7, DDoS protection provider Prolexic announced it had worked with an unidentified metropolitan utility company to mitigate an attack that in mid-February hit the company's website, as well as its online payment and automated pay-by-phone billing systems. The attack took those online platforms offline for two days, Prolexic stated. There is no evidence to tie this attack to the same hacktivist group, Izz ad-Din al-Qassam Cyber Fighters, that is now in the third phase of its assault on U.S. banking institutions. "Utilities are another vertical market that is likely to be victimized in the coming months as attackers look beyond daily targets like e-commerce and financial services," says Stuart Scholly, president at Prolexic, in a statement. 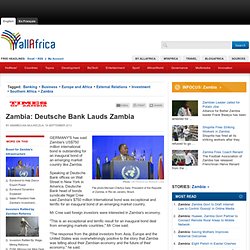 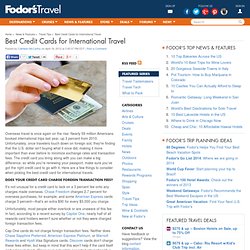 Unfortunately, once travelers touch down on foreign soil, they're finding that the U.S. dollar isn’t buying what it once did, making it more important than ever before to minimize exchange rates and transaction fees. The credit card you bring along with you can make a big difference, so while you're renewing your passport, make sure you’ve got the right credit card to go with it. Here are a few things to consider when picking the best credit card for international travels. Does Your Credit Card Charge Foreign Transaction Fees? It’s not unusual for a credit card to tack on a 3 percent fee onto any charges made overseas. Unfortunately, most people either overlook or are unaware of this fee. Cap One cards do not charge foreign transaction fees. 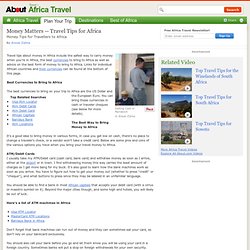 Links for individual African countries and their currencies can be found at the bottom of this page. Doing Business in Africa Forum Presents Opportunities for American Businesses in Sub-Saharan Region. Printer-friendly version Guest blog post by Francisco Sánchez, Under Secretary of Commerce for International Trade and David Hinson, National Director, Minority Business Development Agency Earlier this week, we attended the Doing Business in Africa Forum at the White House. 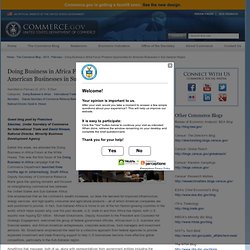 This was the first forum of the Doing Business in Africa campaign that the Commerce Department launched three months ago in Johannesburg, South Africa. Deputy Secretary of Commerce Rebecca Blank gave the opening remarks and focused on strengthening commercial ties between the United States and Sub-Saharan Africa. She emphasized that as the continent’s wealth increases, so does the demand for improved infrastructure, energy services, and high-quality consumer and agricultural products – all of which American companies are well positioned to provide. Zambia. Zambia travel guide. Zambia is a a landlocked country in Southern Africa that's roughly the size of Texas or France. 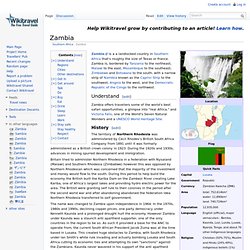 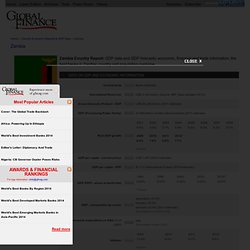