Video games trick you into thinking you're in control, and that's bad. Why Used Video Games Are Such a Big Business. Last June, Microsoft, which so often features land mines in its games, learned how it feels to step on one. 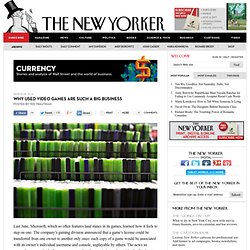 The company’s gaming division announced that a game’s license could be transferred from one owner to another only once: each copy of a game would be associated with its owner’s individual username and console, unplayable by others. The news so angered gamers, who had never encountered such a restriction and consider the freedom to sell used games to be an inalienable right, that Microsoft quickly backed down.

Getting Back In The Game: Finding The Right Game To Play : All Tech Considered. Hide captionLike movies, books and music, there are countless video games to suit all interests and tastes. 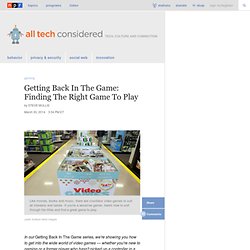 If you're a would-be gamer, here's how to sort through the titles and find a great game to play. Justin Sullivan/Getty Images. When Little Details Make A Big Difference - Features. When my fellow interns and I first got our hands on Grand Theft Auto V, we decided to explore Los Santos together. 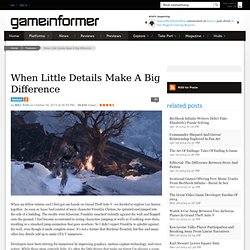 As soon as Isaac had control of main character Franklin Clinton, he sprinted and jumped into the side of a building. The results were hilarious; Franklin smacked violently against the wall and flopped onto the ground. I had become accustomed to seeing characters jumping at walls as if nothing were there, resulting in a standard jump animation that goes nowhere. So I didn’t expect Franklin to splatter against the wall, even though it made complete sense. It’s not a feature that Rockstar flaunted, but this and many other tiny details add up to make GTA V immersive. Developers have been striving for immersion by improving graphics, motion-capture technology, and voice acting.

Nonessential Animation With the spread and improvement of motion capture, animation is better than it has ever been – Infinity Ward even motion-captured a dog for Call of Duty: Ghosts. In L.A. Mobile Trend Report March 2012. Mobile Games Trend Report. This service combines our annual global report and granular 2012-2016 datasets with 12 months of service including quarterly updates and custom analysis support. 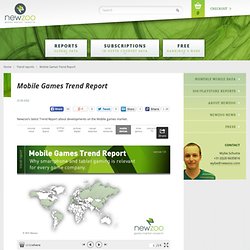 The report and granular data sets can also be acquired as separate items without updates and support. The granular data sets are reviewed quarterly and subscribers will receive an update per quarter for a full year. Included with this service is a full year of custom analysis support based on the global data. Worldwide Video Game, Internet and Smartphone Usage Statistics. Worldwide Video Game Industry Statistics — you know you want them! 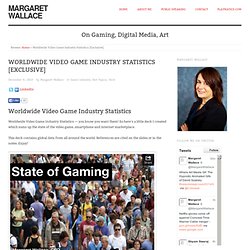 So here’s a little deck I created which sums up the state of the video game, smartphone and internet marketplace. This deck contains global data from all around the world. References are cited on the slides or in the notes. Enjoy! New Reports Forecast Global Video Game Industry Will Reach $82 Billion By 2017. Nintendo’s Wii U Takes Aim at a Changed Video Game World. Spend a virtual evening with Will Wright. Jane McGonigal: Gaming can make a better world. Research Shows $2.87 Billion Spent On Video Game Content In The U.S. For Third Quarter 2012– NPD.com. PORT WASHINGTON, NEW YORK, November 15, 2012 – According to the Q3 2012 Games Market Dynamics: U.S.* report from leading market research company, The NPD Group, in addition to the $1.07 billion spent in the U.S. by consumers on new physical video and PC game software in the third quarter of 2012 (July – Sept), the total consumer spend on other physical forms of content (used and rental) reached $399 million, and content in digital format (full game and add-on content downloads, subscriptions, mobile games and social network games) generated $1.40 billion. 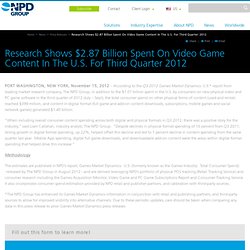 “When including overall consumer content spending across both digital and physical formats in Q3 2012, there was a positive story for the industry,” said Liam Callahan, industry analyst, The NPD Group. “Despite declines in physical format spending of 16 percent from Q3 2011, strong growth in digital format spending, up 22%, helped offset this decline and led to 1 percent decline in content spending from the same quarter last year. As Boom Lures App Creators, Tough Part Is Making a Living. Daniel Rosenbaum for The New York Times Shawn and Stephanie Grimes’s efforts have cost $200,000 in lost income and savings, but their apps have earned less than $5,000 this year. 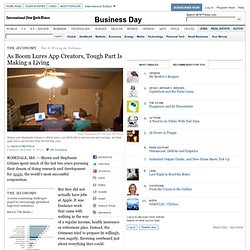 But they did not actually have jobs at Apple. It was freelance work that came with nothing in the way of a regular income, health insurance or retirement plan. Instead, the Grimeses tried to prepare by willingly, even eagerly, throwing overboard just about everything they could. They sold one of their cars, gave some possessions to relatives and sold others in a yard sale, rented out their six-bedroom house and stayed with family for a while. “We didn’t lose any sleep over it,” said Mr. The couple’s chosen field is so new it did not even exist a few years ago: writing software applications for mobile devices like the or . Much as the Web set off the dot-com boom 15 years ago, apps have inspired a new class of entrepreneurs. And programming is not a skill that just anyone can learn.