Computational Biology: Is it possible to create some simple digital creatures in a simulated environment based on Darwin's evolution theory? - Quora. Gene Pool Swimbots. Evolutionary data mining. Process[edit] Data preparation[edit] Before databases can be mined for data using evolutionary algorithms, it first has to be cleaned,[2] which means incomplete, noisy or inconsistent data should be repaired. 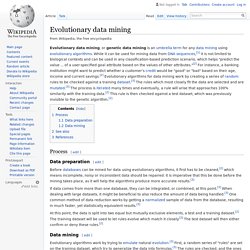 It is imperative that this be done before the mining takes place, as it will help the algorithms produce more accurate results.[3] At this point, the data is split into two equal but mutually exclusive elements, a test and a training dataset.[2] The training dataset will be used to let rules evolve which match it closely.[2] The test dataset will then either confirm or deny these rules.[2] Computational Biology: Is it possible to create some simple digital creatures in a simulated environment based on Darwin's evolution theory? - Quora. Gene Pool Swimbots. Can we simulate evolution using a computer program? - Quora. Network Tierra. Next: Enhanced Network Instruction SetUp: No Title Previous: Digital-Organic Analogies The objective of the work reported here is to create the conditions under which there can be a spontaneous increase in complexity of digital replicators. 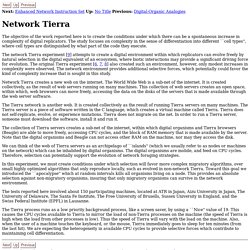 The study focuses on complexity in the sense of differentiation into different ``cell types'', where cell types are distinguished by what part of the code they execute. The network Tierra experiment [9] attempts to create a digital environment within which replicators can evolve freely by natural selection in the digital equivalent of an ecosystem, where biotic interactions may provide a significant driving force for evolution. Tierra home page. ... what hep humorists here are already calling "Critical Mass" (get it? 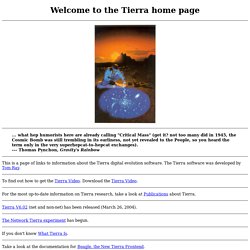 Not too many did in 1945, the Cosmic Bomb was still trembling in its earliness, not yet revealed to the People, so you heard the term only in the very superhepcat-to-hepcat exchanges). --- Thomas Pynchon, Gravity's Rainbow This is a page of links to information about the Tierra digital evolution software. The Tierra software was developed by Tom Ray. To find out how to get the Tierra Video. Download the Tierra Video. 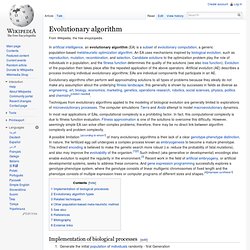 In most real applications of EAs, computational complexity is a prohibiting factor. In fact, this computational complexity is due to fitness function evaluation. Tierra (computer simulation) Tierra is an abstract model, but any quantitative model is still subject to the same validation and verification techniques applied to more traditional mathematical models, and as such, has no special status. 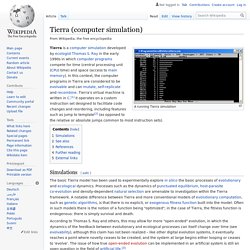 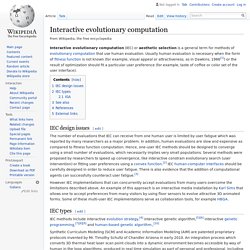 Usually human evaluation is necessary when the form of fitness function is not known (for example, visual appeal or attractiveness; as in Dawkins, 1986[1]) or the result of optimization should fit a particular user preference (for example, taste of coffee or color set of the user interface). IEC design issues[edit] The number of evaluations that IEC can receive from one human user is limited by user fatigue which was reported by many researchers as a major problem. In addition, human evaluations are slow and expensive as compared to fitness function computation. Hence, one-user IEC methods should be designed to converge using a small number of evaluations, which necessarily implies very small populations. Scientists create 'artificial evolution' for the first time. Scientists have made a significant step towards developing fully artificial life – for the first time, they demonstrated evolution in a simple chemistry set without DNA. 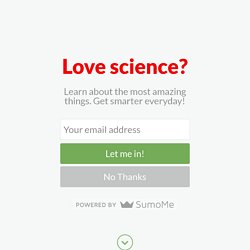 In a way, the researchers showed that the principle of natural selection doesn’t only apply to the biological world. Using a simple a robotic ‘aid’, a team from the University of Glasgow managed to create an evolving chemical system. They used an open source robot based upon a cheap 3D printer to create and monitor droplets of oil. The droplets of oil were placed in water-filled Petri dishes, and each dropled had a slightly different mixture of 4 different chemical compounds. Photographs of the droplet behaviour as a function of time (from left to right) for all the traits (given in a–i). The ideas.